“Funny, fears of Coronavirus didn’t stop Bill de Blasio from helping activists to paint a BLM banner on the street in front of Trump Tower.” 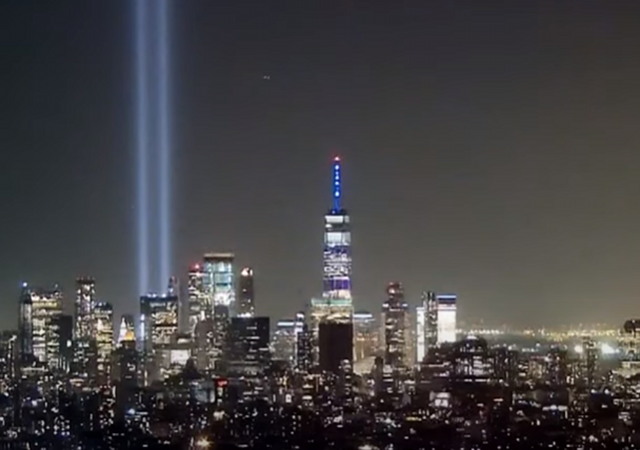 The 9/11 Memorial Museum has decided that Coronavirus presents too much of a risk this year to display the iconic memorial lights, which require a large crew to operate.

This is in the same city that has been the scene of large, ongoing protests for weeks.

The iconic Lower Manhattan 9/11 memorial display that features twin beams of light to honor victims of the terror attacks will not shine this year over coronavirus concerns, organizers said Thursday.

The annual “Tribute in Light” display requires a large crew to pull off, the 9/11 Memorial and Museum said on its website, posing health risks this year that “were far too great.”

The museum said it was an “incredibly difficult decision” to nix the lights, but announced an alternative citywide initiative to commemorate the 19th anniversary of the September 11 attacks.

The new plan, dubbed the “Tribute in Lights,” will feature buildings across the city lighting up their facades and spires in blue on 9/11.

I’m sorry, but I’m just not buying it. I think this is completely political.

A few years ago, Rush Limbaugh talked about a study on his show, which found that celebrations of July 4th made voters more likely to vote Republican.

This strikes me as something similar. After 9/11, America was more unified and unashamedly patriotic. It may sound deeply cynical, but I believe 9/11 is being canceled this year because of the election.

You know who agrees with me? Geraldo Rivera:

Fox's Geraldo Rivera says the 9/11 museum canceling this year's Tribute in Light due to coronavirus is a political hit-job to "stick it to the president [and] make life as grim as we possibly can" so that Trump looks bad. pic.twitter.com/Kv2qzrHAWl

Funny, fears of Coronavirus didn’t stop Bill de Blasio from helping activists to paint a BLM banner on the street in front of Trump Tower.

#tributeinlight cancelled for safety reasons due to Covid . But this is ok outside Trump Tower! #911memorial #nyc #newyorkcity pic.twitter.com/oXzjJoWyrQ

It’s worth noting that the board of the 9/11 Memorial Museum includes known Trump-haters Michael Bloomberg and actor Robert De Niro.

David Marcus writes at The Federalist:

The reason given for cancelling this display, an annual prayer and tender opportunity for reflection, is absurd and cynical. Like everything in our locked down lives the coronavirus is to blame. How, the non-profit museum wonders, could the lights be assembled without creating a super spreader event? Nevermind that grocery stores, pharmacies, bodegas, and yes, don’t forget protests go on apace. No, there is just no way that lighting can be assembled without risking a new outbreak. It is ridiculous on its face.

Michael Bloomberg, the worrywart former mayor of Gotham, is the Chairman of the museum’s board, which also includes Robert De Niro and Mets Chief Operating Officer Jeff Wilpon. Maybe the latter explains this dumb decision-making. As Staten Island City Councilman Joe Borelli put it, “This was the wrong call by the museum’s board. They have the opportunity to be leaders and live up to the museum’s mission, but I suppose some, like Robert De Niro, would prefer to just keep lecturing us on everything else.”

Hey @NYCMayor, Which part of 'NEVER FORGET' did you forget? https://t.co/BDk251ZPNV

A Giuliani-linked charity is trying to step in and make the memorial lights happen.

The city’s regular and iconic light tribute in memory of those who lost their lives in the September 11th terror attacks in 2011 was cancelled because of the CCP-virus pandemic, officials announced on Thursday.

“This incredibly difficult decision was reached in consultation with our partners after concluding the health risks during the pandemic were far too great for the large crew required,” the 9/11 Museum website read.

Now, a charity founded to assist 9/11 victims and their families as well as U.S. combat veterans is stepping up to ensure the memorial continues.

Tunnel to Towers announced Friday that they will hold a special memorial ceremony in lower Manhattan in a bid to keep the 9/11 commemorations uninterrupted.

“The twin beams of light that shine over lower Manhattan in silent tribute to those lost on 9/11 are an iconic symbol of hope visibly showing that light will always triumph over darkness,” said Frank Siller, Chairman and CEO of the Tunnel to Towers Foundation.

He added: “We will do everything that is humanly possible to make sure that on September 11, the night sky at Ground Zero will be illuminated with our Towers of Light tribute.”

I hope it happens but if it doesn’t, the reasons seem obvious.

And we can’t have that.

The decision has been reversed.

The 9/11 Memorial has reversed itself and — after a huge backlash — now says the Tribute in Light will indeed be happening after all. https://t.co/XnVHV0Zr0C

I am too old for this kind of thing but dammit, since the PD are stepping back it might just be time for this.. “Every normal man must be tempted, at times, to spit upon his hands, hoist the black flag, and begin slitting throats.” It will take savages to deal with savages.

“Do not fear the monster within. Of all the monsters in the world, it’s the only one that might ever be on your side.”

Wish I could remember who first said that.

Good! Decision reversed. No doubt the powers that be read my first post above.

The highway department clears out roadside memorials every six months or so too. Sort of a policy compromise to prevent proliferating memorials from taking over everything.

The 9/11 Memorial Museum has decided that Coronavirus presents too much of a risk this year to display the iconic memorial lights, which require a large crew to operate.

I operated WWII surplus searchlights for Film Ad Corporation in Loa Angeles in the early 1960s. I rode my bike to the job as I was too young to drive. I ran them alone, and they took some minding. Carbon change-outs, adjustments, and nursing some very crotchety engines.

I did this alone. What “large crew” is needed to operate today’s xenon or other non-carbon systems?

Or, does the stage-hand union dictate the crew size?

Leftists have declared war and are pulling out all the stops

The Tunnel to Tower organization is staging its own 9/11 ceremony since DeBlasio decided that family representatives will not be announcing the names of the murdered. I will bet they will find a way to get the lights up. DEFEAT ALL DEMOCRATS!

I think 100,000 patriots with 4 D-cell maglights could put on a good display, as well as effectively deal with protestors.

“It’s worth noting that the board of the 9/11 Memorial Museum includes known Trump-haters Michael Bloomberg and actor Robert De Niro.”

Ugh. That is like having unrepentant antisemites helping to run the Anne Frank House in Amsterdam. (Which not so far-fetched if you look at their website and some of the bigoted garbage they promote. How long before lefty intellectuals turn Anne Frank into a “lesbian anti-Zionist freedom fighter”?)

In a few years the 9/11 Memorial Museum will be celebrating the destruction and killing as a “mostly peaceful protest against racism and Islamophobia”.

lived in NYC for a while years ago–many of our countrymen there are good folks–remember how NYC responded to 9/11–brave, resolute, defiant–their spirit humbled us all–the good people there will remember and act with dignity on our behalf to remember the victims

deblasio illegally painted ‘blm’ on a city street. The 9/11 Lights are a tribute to ALL the lives lost that day. What kind of sick, depraved mind does is take to come up with this kind of stuff.

The 9/11 Lights are a tribute to ALL the lives lost that day.