“These improvements in the labor market reflected the continued resumption of economic activity that had been curtailed due to the coronavirus….” 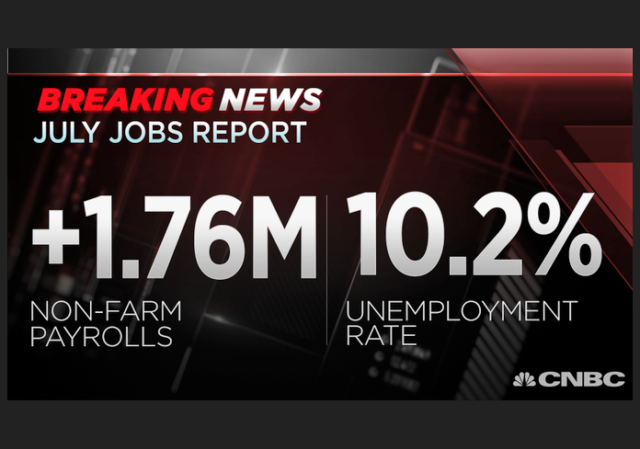 From the Bureau of Labor Statistics Release:

Total nonfarm payroll employment rose by 1.8 million in July, and the unemployment rate fell to 10.2 percent, the U.S. Bureau of Labor Statistics reported today. These improvements in the labor market reflected the continued resumption of economic activity that had been curtailed due to the coronavirus (COVID-19) pandemic and efforts to contain it. In July, notable job gains occurred in leisure and hospitality, government, retail trade, professional and business services, other services, and health care….

In July, the unemployment rate declined by 0.9 percentage point to 10.2 percent, and the number of unemployed persons fell by 1.4 million to 16.3 million….

The labor force participation rate, at 61.4 percent, changed little in July, following increases in May and June….

We lost 22 million jobs at the outset of this thing.
We've since recovered 9 million jobs.
More than half of the dramatic job loss remains.

U6 was only that low once under the regime. Think were we would be if this happened under a liberal regime.

The unemployment rate never hit 8% in 1984. Try living in a fact based world for a change. You’ll handle it better when Trump loses in 88 days.

You have a bit of drool on your chin

I see foam myself.

If the blue states would reopen more fully the unemployment rate would be down under 7% in no time. Unfortunately millions of jobs in the entertainment and restaurant industry may be lost forever.

You do understand that a huge percentage of business losses comes from people VOLUNTARILY avoiding going out in public as opposed to those mean old Democrats forcing them to stay home, right?

Our overlords’ job is to organize and supply things so we can do *more* as we choose. They seem to be doing a pretty badly at that, lately.

Or any other part of their lives. Like, just to pick a hypothetical, walking outside in the sun.

The diner round the corner is what Pat does to supplement her retirement: opens at 07:00 6 days a week. It’s the difference between the other parts of her life being comfortable, or barely ekeing by. And she works for that difference in “retirement”, as did her husband Howie, before he died. (Cancer.)

The second day take-out was “permitted” around here, a friend of mine got a big order to go at another neighborhood place, and tipped $100. The server, in his words, “burst into tears.”

“Business losses” sounds like balance sheet write-downs, n stock index declines. When The Overlords say “these guys not those guys”, or “this, not that”, they’re picking winners and loosers, who has more life or less even up to who lives and dies.

I haven’t seen any of the various pronouncements and protocols analyzed in terms of the conventional health policy metrics of life and health years. (The specific terms vary.) I wonder what some of those trade-offs would be. I wonder who’s call it is to make those trade-offs.

Pat chooses to work to have a better rest of her life. Who’s prerogative is it to stop her from doing that? If someone’s gonna take that from her for the greater good, how much greater good? How sure do they have to be?

Well, it’s better than a report that didn’t beat expectations.

I had predicted that the pace would not stay at over 2 million and when it dropped to a meager 1.5 million, the coverage would be doom and gloom and here it is. In what world is 1.8 million new jobs and a 0.9% drop in unemployment a bad thing. In an Orange Man Bad world, that’s where.

Within a 5 mile radius from where I am sitting, there are many hundreds of businesses with Help Wanted signs out front. The commercial trucking lanes are packed 7 days a week. My daughters’ boyfriends are working overtime. Bars and restaurants have lines in front. Parking structures are full.

notamemberofanyorganizedpolicital in reply to DanJ1. | August 7, 2020 at 1:09 pm

What does stand for, National Pedophile Rapists????????

many republicans have correctly pointed out that the $600 weekly fed unemployment was having the unintended effect of discouraging people from returning to work.
surely the president would have been privy to the news in this article. yet, recently he endorsed the idea of maintaining the $600 payments. if trump wants to continue to see improving employment numbers, why would he also call for a continuance of federal money?

So, can someone explain why when we have twice as many people applying for unemployment benefits than are going off unemployment, in July, we can have a reduction in the rate of unemployment?

Not everyone who’s unemployed qualifies for unemployment benefits.

So, we have a 2.4 million person increase in the number of unemployed during the month of July [this is calculated based upon the number of new applications minus the number on unemployment going off benefits] and we still have 1.8 million new jobs in the same period? Where do these numbers come from? If there is some magical mathematical formula which allows you to make more money of you spend more than you take in, please clue me in so that I can become wealthy.

By the way, I am well aware that there are a number of people who do not qualify for unemployment benefits. This is one reason why I am estimating that the true unemployment rate in April was over 20%, not the 14% official rate. So, again, where are these numbers coming from?

Sorry, the official estimate of unemployed in the US is currently 16.3 million people, per the Bureau of Labor Statistics, not 8.3 million. Based upon the government estimate of 160 million employable persons in the country, this is how the official unemployment rate of 10.2% is achieved.

Look, various factions are busy spinning economic numbers, COVID infection numbers and just about any other statistic to benefit their personal agenda. For this reason, it behooves people to do their own research and not simply parrot what people and organizations put out.

If go to the bottom of page 2 on this link, from the Dept. of Labor, in that article; https://www.dol.gov/sites/dolgov/files/OPA/newsreleases/ui-claims/20201532.pdf ; you will see the number of those on unemployment benefits as of the middle of July; 31.3 million. The total number of people on unemployment insurance for the comparable period in 2019 was 1.7 million.

Well, the trolls are out in force in the comments, again, I see.

Best to assume “operation demoralize” will be in force til the election counts are in, so, Feb of 2021 or so.

Now, the economy is a living thing. It needs to breath and grow. By shutting it down, in March, the US economy was crippled, driving the unemployment rate up to over 14% [though the rate was much more likely over 20%] from a little over 4%, officially. And it is still , officially over 10%. And, the crippling actions continue, with additional lock-downs and restrictions on commercial enterprises. The longer these restrictions are in place, the longer it will take for the economy to recover. And, economies recover just like a living organism. It takes longer, usually much longer, for an economy to recover from a blow than it does for the economy to show injury from that blow.

So, the economy is in the toilet. it is not recovering very quickly. How to spin this to make it beneficial for the Trump campaign? Cherry pick statistics and thn present them in the the very best possible light which can be dreamed up. So far, we saw thee unemployment numbers being spun in this way. People were trumpeting the reduction in NEW unemployment claims while while highlighting the number of existing claims which were being eliminated. Now, ignoring the fact that some of the existing claims was simply come to an end because the benefit period has expired, the number of NEW claims were were still twice as high as the number of claims ending. So there was a net GAIN in unemployment, though at a slower rate than previous months. This hardly translates into any recovery of the US economy, let alone a significant one. So, if we had a net increase in unemployment numbers in July, exactly HOW did this translate into a net decrease in unemployment?

It is just another scam. This time being perpetrated by supporters of the President’s reelection. Is anybody else tired of being assumed to be stupid and lied to by the political interests in this country?