“We are going to rename it the John Oliver Memorial Sewer Plant. Why? Because it’s full of crap just like you, John.” – Danbury Mayor 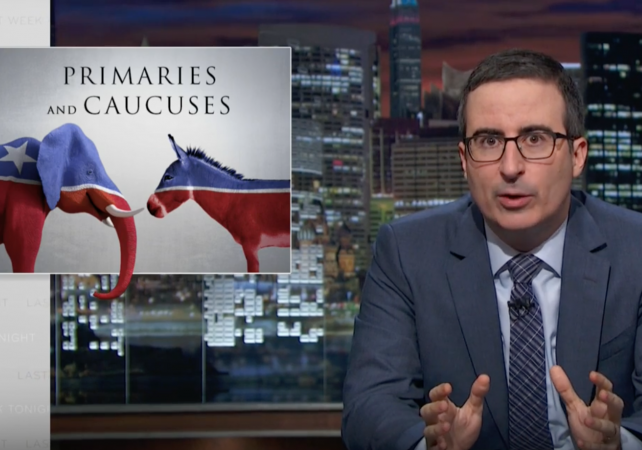 It’s not clear what triggered comedian John Oliver’s hate of Danbury, Connecticut, but in a segment, Oliver said “fuck Danbury” and proceeded to bash the quaint little town. In response, the Mayor of Danbury announced the renaming of the sewage plant to “John Oliver.”

A Connecticut town’s officials are showing comedian John Oliver what they think about his expletive-filled rant about their city — they’re naming the local sewage treatment plant after him.

Danbury Mayor Mark Boughton announced the tongue-in-cheek move in a video posted on his Facebook page on Saturday that shows him at the plant.

“We are going to rename it the John Oliver Memorial Sewer Plant,” the Republican mayor says. “Why? Because it’s full of crap just like you, John.”

The new name comes after a recent episode of HBO’s “Last Week Tonight with John Oliver” in which he explored the racial disparities in the jury selection process, citing problems in a few Connecticut towns.

“I know exactly three things about Danbury,” he said. “USA Today ranked it the second-best city to live in in 2015, it was once the center of the American hat industry and if you’re from there, you have a standing invite to come get a thrashing from John Oliver — children included — (expletive) you.”

It wasn’t exactly clear what prompted Oliver to go off on Danbury. A message seeking comment was left for his agent Sunday.

Oliver also made fun of Boughton and other American mayors in 2017 over videos they made seeking to attract Amazon’s second world headquarters. In his video, Boughton asks Alexa where the best place for the facility would be, and Alexa says Danbury.

Oliver’s segment that prompted the renaming along with the Mayor’s response:

Say I like the cut of this Mayor’s jib.

Sewage plants are full of crap, but they clean the toxic sludge up. Sewage treatment plant is good for him. He is a sewer line, supplying a full pipe of crap.

Every non-Democratic city and town should rename its dumps, sewage plants etc after all the crappy fake news reporters on NPR, CNN, NBC et al.

Not having watched SNL since Belushi and Ackroid were stars, I was wondering what network Oliver worked for as a talking head. I didn’t know who he was and now I can forget who he is.

they’re naming the local sewage treatment plant after him.

This is selling the sewage plant a bit short. It’s worth bearing in mind that indoor plumbing and modern sewage which won’t make an entire city sick rank up with the greatest achievements of Western civilization. The techniques used to keep drinking water and waste water separate decisively defeated some of humanity’s oldest enemies—cholera, dysentery, and typhus. And lowly fixtures like the sink trap and the flush toilet are works of genius.

Oops, “modern sewage” should be “modern sewerage”. I’m going to ask Santa for an “Edit” function.

So, you’re saying it might be more appropriate if Oliver had a San Francisco street named after him?

The problem with modern sewage is that it mixes large amounts of potable ware with small amounts of toxic material. Potable water is going to be a big problem.

I admire the fact that the Mayor is fighting back, but it’s really not fair to the plant and the professional operators and engineers working there.

The filth spewing forth out of John Oliver’s mouth, on the other hand, is putrid and disgusting.

You have to have a good sense of humor to work in such conditions.

On Saturday, Mayor Boughton said he agreed with Oliver about the museum, castle and ranking, before announcing the city’s new “fourth point of interest.”

“Behind me you see the city of Danbury sewer plant,” Boughton said in a video posted to Facebook. “We are going to rename it the ‘John Oliver Memorial Sewage Plant.'”

The reason, the mayor explained, is “because it’s full of [expletive bleeped].”

Oliver needs to take a lesson from Dave Barry after he made fun of Grand Forks; the city named a sewage facility after him, and he was there for the naming ceremony. Nearly 20 years later he still considers it a great honor.

Maybe Dave Berry isn’t such a pompous ass and has a better sense of humor.

Dave Barry found humor by Self-deprecation of what ever was happening in his every day life. He always makes himself or what was going on identifiable to his readers or in his books. For the same reason good comedians, stand-up or situation comedies, always debase themselves. Oliver draws his “humor” at the sake of debasing others.
He ends up the only one amused.

sewage plant is useful. a planthead full of sewage…not so much.

Another manifestly unfunny, self-reverential, Dhimmi-crat propagandist-lemming, laughably calling himself an alleged “comedian.” As obnoxiously off-putting, smug and nauseating as that insufferable douche, Colbert.

Good for them. Such good fun.

So many jokes. So little internet.
.

Hard to imagine Oliver is another thin-skinned liberal who can dish it out but can’t take it. Danbury should add this to its list of tourist attractions and maybe make some money off of Oliver’s rant.

I was hoping they would put more emphasis on the “memorial” part of the name and flush his body parts into plant.

A sewage treatment plant cleans up filth. Naming such a plant after someone honors that person. It is like calling Mr. Oliver a Muckraker, which is far from an insult. It would be an insult if the sewage itself was named after him.
As it is, this naming compliments Oliver, unless the plant is ineffective and in fact spreads the filth around.
However, it is the mayor himself who would have to take responsibility for such spreading.
Muckrakers back more than a hundred years ago got their reputations by denouncing corruption in city governments.
That this mayor gets pleasure from this naming, which is a gratuitous act on his part, seems to mean he considers it an insult to Oliver. This suggests that in the battle between the sewage plant and the sewage, he is identifying himself with the sewage.

I see a bit of a problem. In a sewage plant, the crap is treated, fool/tool Oliver is beyond treatment.