Can Trump Flip Minnesota in November?

Can Trump Flip Minnesota in November? 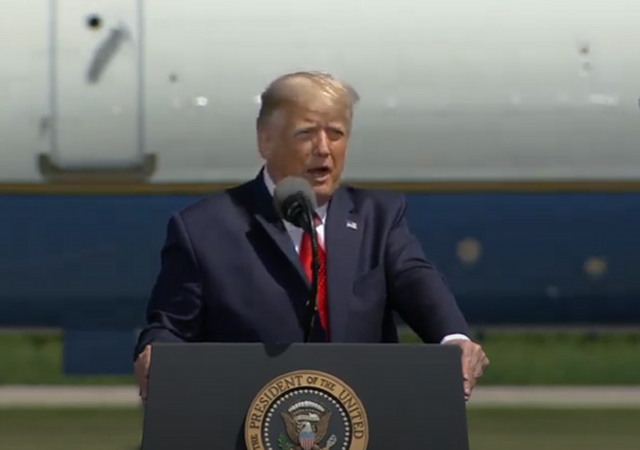 In 2016, Trump narrowly lost Minnesota. In 2020, he is clearly making a play for the typically blue state. He delivered a speech there on Monday.

Recent polls are showing that he definitely has a chance to win the state.

Max Greenwood reports at The Hill:

President Trump is within striking distance of former Vice President Joe Biden in Minnesota, according to a new Emerson College poll released Tuesday that shows the GOP incumbent trailing by only 3 points in a state Democrats have carried for decades.

The survey shows Biden with 50 percent of the vote in Minnesota, while Trump trails with 47 percent, within the poll’s 3.6 percentage point margin of error.

Several other recent polls in Minnesota show Biden with a much wider lead. A Fox News poll released last month put the presumptive Democratic presidential nominee ahead by 13 points, while another from the left-leaning Public Policy Polling found Biden with a 10-point advantage over Trump.

Biden’s 3-point lead in the Emerson College poll, however, is still wider than former Democratic nominee Hillary Clinton’s margin of victory in Minnesota in 2016, when she carried the state by a scant 1.5 percentage points.

Former President Barack Obama won the state by 52 percent in 2012 — nearly 8 points more than Republican Mitt Romney — and 54 percent in 2008, besting the late Sen. John McCain by a whopping 10 points.

Minnesota last voted for a Republican president in 1972, giving it the longest blue streak of any state in the nation. It was the only one to vote against President Ronald Reagan in 1984.

Brian Bakst of MPR has some details about Trump’s Monday speech:

Hoping to win over Minnesota in the fall election, President Donald Trump on Monday pounded political opponents as a threat to the nation and portrayed himself as a law and order candidate during an hourlong campaign speech at the Mankato airport before heading to Wisconsin and vowing, “I’ll be back.”

“We’re going to have an election that is all about the survival of this nation,” Trump told supporters…

He described former Vice President Joe Biden, who’s expected to formally receive the Democratic nomination this week, as “a “puppet of left-wing extremists trying to erase our borders, eliminate our police, indoctrinate our children, vilify our heroes, take away our energy.”

Trump called on Minnesota voters to “not let this happen. You will deliver a historic victory for our values, our citizens and our treasured way of life.”

Here are some clips from Trump’s speech:

Minnesota has 10 Electoral College votes and losing the state to Trump would deeply wound Democrats.

If anybody in Minnesota who suffered property loss and physical harm in all the chaotic riots this summer votes for Biden, they’re asking to get more of what they already got.

My family is from Minnepolis, moved out in the 1950’s. Still have a lot of cousins living there who have always voted democrat. However, looking at their facebook posts over the last 3-4 years, Its very likey they have switched to the gop.

Can he flip it?

Why not! Trump is great a flipping off the Democrats. Why should he stop at the border of Minnesota?

I can see The Donald not only flipping Minnesota, but flipping Nevada & New Hampshire as well. I have a hunch he’ll also have a “surprise” win somewhere, perhaps Colorado.

Joe-dallas in reply to notamemberofanyorganizedpolicital. | August 18, 2020 at 9:04 am

Winning CA is wishful thinking. Winning back the half dozen or so congressional district lost to d in 2018 is not. Nor is running a get out the vote message in order to convince the remaining CA r voters to cast ballots to even up the ‘popular vote’.

Yes the popular vote is eye candy now, but with the popular vote state compact on the horizon it makes sense to begin educating and training voters to cast ballots even when it may not affect matters locally.

notamemberofanyorganizedpolicital in reply to Joe-dallas. | August 18, 2020 at 1:48 pm

Without a vision people perish.

notamemberofanyorganizedpolicital in reply to Joe-dallas. | August 18, 2020 at 1:51 pm

We should make the Democrats think that CA is in play.

As someone else stated, the DEMS must be worried about CA or they would not have stuck in Kamala.

DSHornet in reply to notamemberofanyorganizedpolicital. | August 19, 2020 at 8:51 am

” … they would not have stuck in Kamala.”

Pardon, your (Freudian) slip is showing.
.

Not Nevada. The corruption is deep there, and the poorly implemented mail-in voting will allow massive Democrat ballot harvesting.

Nevada is loaded with illegals who will be paid to vote for Clueless Joe.

He’s flip a lot, and they’ll steal it anyway in the urban counties.

The question is, who will the car trunks vote for?

My paternal grandmother was the only Republican in the family. Since she passed on, she’s voted Democrat.

Yes, we know from the silly mailbox hysteria that the Dems are planning mail-in voting fraud exceeding anything we’ve seen in the past century and a half. The Dems always accuse their opponents of doing what they themselves have already done, or tried to do but were stymied, or are planning to do in future. Like a dog’s tail-wag or a shark fin sticking out of the water, it’s a “tell” they can’t control.

The polling is very close and people in MN generally presume everyone’s a D so a lot of people don’t talk about Trump; there has been an epidemic of RDS here, and people are completely irrational about conservatives, in part due to the unions, who have a history of pushing the D agenda.

I’ve never seen a Trump sign and his campaign doesn’t have a Minneapolis office although there are suburban offices and a St Paul office which is near the boundary of a suburb.

Trump needs to do a mail blitz of Minneapolis and send a flyer every week. He has more supporters here than he realizes and isn’t sending mailers.

I see your governor quietly okay’d Hydroxychloroquine after banning it’s use.
Also, I’m hoping your governor starts asking for some higher taxes to pay for Minneapolis damage. Don’t know if the people will mind paying extra for the blm destruction but I have hopes it’ll drive some away from the dems.

Getting Minnesota won’t matter if he loses Florida. Palm Beach County is revving up its vote stealing machine by putting bar codes on the back of mail-in vote envelopes that identify the party the voter is registered for. These bar codes have human-readable labels. That means your friendly neighborhood postal worker (whose union endorsed Biden) can throw away votes, and if not them the PBC election apparatus can do it en masse with a barcode reading machine like the USPS uses to process mail. They might not even need the felon vote to win Florida for the Democrats.

One of the comments I read on that story is those envelopes were for the primary contest. So having the R and d on the back of the envelopes only made it easier for sorting.
Supposedly neither ballot had anyone of the other party on the ballot so you couldn’t be a dem and vote for repubs you’d want to be easy losers. You could only vote for the party you registered for.

He is unlikely to flip the state because Minnesota democrats don’t do any real thinking for the most part just vote straight democrat. People stupid enough to invite thousands of muslim Somalians to their state are beyond the reach of reason.