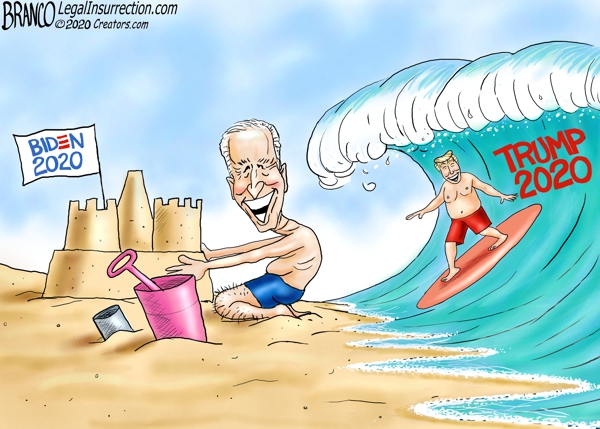 Excellent way to represent how clueless Biden is — but, of course, it might be more accurate if Biden were groping Kamala who was building the castle.

Don’t you mean Orange Shortfinger, a/k/a The Lyin’ King groping every female in reach, except wife Melanoma who recoils even from holding hands, until he makes financial concessions to their pre-nup?

The hair on Biden’t legs is a nice touch. LOL!

…but are they BLOND hairs?

Not just a wave on an incoming tide, but a tsunami of a wave which was either ignored or went unnoticed by the earlier ebbing tide.

The tsunami strikes a second time. 2016 is a distant memory, not a lesson. I hope the marxists continue to underestimate the depth of the support for the anti-marxist.

The last one LOST by 2 million popular votes because so many ‘Muricuns” are too stoopid to figger out that they’re not wet because it’s rainin’–the Republiconartists are peeing on them since the Great Depression.

“Always remember: it wasn’t the rioting, looting, burned out buildings or dead bodies in the streets that made Democrats pump the brakes a little on BLM-

It was the polls finally turning against them. Nothing matters to the libs but power.”

J. Maccabee in reply to notamemberofanyorganizedpolicital. | August 30, 2020 at 2:02 pm

Right. That’s why there’s an obscene and increasing wealth gap between grifters like Herr Drumpf, plutocrats like Mitch (the b***h) McConartist, and the fools who vote against their own economic interests since WWII. In the immortal words of that great fictional philosopher, Forrest Gump: “You can’t fix stupid.” How very true.

Shouldn’t that be a red tide instead of a blue wave?

Who on ‘our’ side was the first to acquiesce to the left’s narrative shifting the ‘red’ communist colors to conservatives, and ripping off the “true blue” color for the communists?

notamemberofanyorganizedpolicital in reply to TheFineReport.com. | August 28, 2020 at 4:56 pm

I can remember when blue was the color of Republicans.

But yellow has always been the color of Democrats……

You’ve got it all wrong. It’s the extreme left and right autocrats; that is; the neo-Stalinists like Betoff O’Dork and neo-fascists like Herr Drumpf and the Republiconartist Congressional leadership who aren’t “conservative” or “progressive.”

Ben Franklin and Tom Jefferson and JFK were progressives. Everett Dirksen or Charles Percy were conservative. Margaret Smith, Roman Hruska, Jacob Javits and Hiram Fong were conservative. These Senators all voted to conserve the principles of the founders of the U.S.A. that made America the great melting pot. The great nation that lived by the credo inscribed on the Statue of Liberty.

Today’s Republiconartist Party ideology rests on the establishment and maintenance of a plutocracy operated by a wealthy hereditary aristocracy. Any man or woman who votes Republican and isn’t at least a millionaire votes against their own DIMINISHING economic interests.

And just as nasty as the oceanic one.

Yikes. Is this true?

J. Maccabee in reply to notamemberofanyorganizedpolicital. | August 30, 2020 at 2:41 pm

Yikes! Is it true that the party of the plutocrats–the Republiconartist Party–has shifted the tax burden of maintaining the wealthiest nation on Earth disproportionately upon working Americans and created a colossal wealth gap between the 1% of the wealthiest Americans and the lower 99%? You betcha. The vanishing American middle class has just about lost the class warfare battle conducted by the Republiconartist Party since the 1920s, interrupted only briefly by FDR’s New Deal and WWII.