And Biden Was The Biggest Ratings Draw for 2020 DNC. 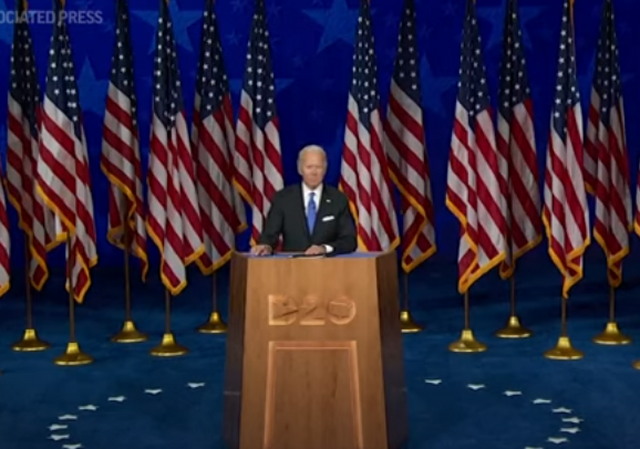 The virtual Democratic National Convention struggled with ratings throughout the week. Joe Biden’s nomination acceptance speech on Thursday night was the biggest ratings draw, but even that came up short compared to four years ago.

Biden draws highest TV ratings of Democratic convention, but down from 2016

Joe Biden’s speech Thursday night accepting the Democratic presidential nomination was the highest-rated event of the week for the Democratic National Convention, while drawing a smaller audience than Hillary Clinton’s speech at the convention in 2016, according to early estimates from Nielsen Media Research.

Biden’s speech was watched by 21.8 million people on TV, according to initial figures from Nielsen, beating out the early numbers for other major speeches at the convention earlier in the week. The figure, which does not include online streaming of the speech, is expected to grow when additional networks are added.

The early estimate for Thursday’s TV audience is a slight uptick from the previous night, when Sen. Kamala Harris (D-Calif.) delivered her acceptance speech to be Biden’s running mate and former President Obama spoke in support of his former vice president.

Still, the initial numbers mark a 21 percent drop from Clinton’s speech at the convention in 2016, when she accepted the Democratic nomination that year. It is also more than 38 percent lower than President Trump’s acceptance speech at the Republican convention four years ago, which drew 34.9 million viewers.

You would never know this if you listened to people at CNN, MSNBC, and other networks who gushed over speeches all week, from Michelle Obama to Joe Biden.

Again, we're in a pandemic with more people at home…

And before you cite cord-cutting, please know that the cable news networks are all enjoying their highest-rated years on record.

And… before you throw the 2016 streaming numbers are different than 2020c where it’s more prevalent, Trump’s 2020 State of the Union — with all of those streaming options — delivered more than 37 million viewers on the same six networks.

Earlier in the week, things were even worse compared to four years ago.

Jordan Davidson wrote at The Federalist:

Democratic National Convention night two viewership was down at least 48 percent from broadcasts of the same night in 2016, even though many Americans are subject to government restrictions keeping them cooped up at home far more this year. According to reports, the top six broadcast networks, MSNBC, CBS, NBC, ABC, Fox, and CNN, only received 6.13 million viewers combined during air time of the convention this year.

To put it in perspective, “America’s Got Talent” received more views during its scheduled hour on NBC than any other network individually recorded during the second night of the DNC.

A Biden campaign spokesman claims that the digital stream numbers were good:

NEWS: 28.9 million Americans tuned in to @DemConvention last night across TV & digital platforms, up from 2016 & shattering the previous record for digital streams, which totaled 10.2m even as numbers still come in.

We are producing a digital convention, and people are watching.

That could be true, but the view count numbers on the DNC 2020 YouTube Channel are far from impressive.

It’ll be fascinating to compare the numbers for the Republican National Convention at the end of next week.

Bwaaa haaa haaa, Guess before I gloat should wait and see if the Republicans can do better.

notamemberofanyorganizedpolicital in reply to Skip. | August 22, 2020 at 1:51 pm

“What Have Democrats Done To Solve ANYTHING?”:

More bad news for the DIMS.

‘As Easy As Going To Starbucks’ – Dr. Birx Says

I can’t believe Gropey Joe had the audacity to stand in front of all those racist flags.

It was likely pre-recorded in front of a green screen like weathermen use. Probably 10 or 20 times before one was good enough to use for real. It almost certainly was not live. And there most certainly will not be any live debates.

Yeah I’ll be shocked if they let him debate. Hell, they won’t even let him (or Harris) talk to a sycophantic reporter. Imagine what Trump will do to him.

The Dems won’t even admit it was taped… probably in parts, but they haven’t come out and said it was live either

notamemberofanyorganizedpolicital in reply to gonzotx. | August 22, 2020 at 2:02 pm

murkyv in reply to notamemberofanyorganizedpolicital. | August 22, 2020 at 6:31 pm

Did they include mail-in viewers?

Yes they did and included viewers in Canada, Mexico and Australia. Then they added 4 and multiplied by 8.

Then, sutracted 32, multiplied by 5, divided by 9, and got the viewer count in Celsius.

Michael Moore is going to make a movie about it called Celsius 9/11.

To put it in perspective, “America’s Got Talent” received more views during its scheduled hour on NBC than any other network individually recorded during the second night of the DNC.

So, “America’s Got Talent” beats “America Gets Hate”.

Ask a Democrat to tell you the one thing they find inspiring about Joe Biden. They can’t. He is just not Trump.

Success, for his acceptance speech, was measured by not displaying any outward signs of dementia. Biden was as inspiring as watching paint dry. Frankly, I would have rather watched the old show “Test Pattern”. The speech with riddled with self contradictions designed to appeal to those who barely follow politics.

The TV show Test Pattern is as inspiring as the movie ivsaw at a drive-in aeven months ago. Closed for the Winter.

Let’s also admit: Altogether, Joe just ain’t telegenic — neither he, the messenger, nor his message. He simply flops every time he tries to perform in public.

Moreover, I feel that even if he were a much better messenger, or if his message was far more genuine and specific, ie, less metaphysical, more commonplace, and thus policy-oriented, in the end he still would have flopped.

Joe ain’t presidential because he lacks what the Bronze-Age Greeks knew as “kleos,” “. . . often translated to ‘renown’, or ‘glory’. It is related to the word ‘to hear’ and carries the implied meaning of ‘what others hear about you’. A Greek hero [earned] kleos through accomplishing great deeds.”

Joe is no champion, no great warrior for any good and necessary fight, battle, or campaign. Simply, then, he’s no hero of any sort evidenced by the fact that has no star-power.

America’s got, but Joe doesn’t have talent.

Of course viewership is going to be lower than Hillary’s. There’s nothing “historic” about Gropey. He’s just another corrupt old white guy with a predictable prepared speech. There’s no chance for a spectacle of a simulated glass ceiling falling all over him. The only excitement would be waiting to see what he’ll call “you know, that, that thing.” I’m sure most Dem voters would much rather go back to pulling the wings off flies, or whatever they do when they’re not supervised.

Media used to joke about large fields of early-on candidates by comparing them to Snow White’s 7 Dwarfs.

This year the Democrats thought they were nominating Gropey but got Dopey instead.

The really sad part is: only one dwarf in 7 is happy.

And he left the Democrats years ago, to stay that way.

It’s hard to compete against Monday and Thursday Night Football. And then there is the NBA and MLB!

Biden the Lightbringer claims to represent “Light,” while gleefully supporting the forces of darkness, the goose-stepping, brownshirt-jackboot-thugs of “Anti-fa” and “Black Lives Matter.”

Biden the Lightbringer didn’t possess the intelligence and common sense to support a travel ban to/from China, but, he will force Americans to wear masks by imperial decree, because, you know, this bit of theatrical posturing will somehow be meaningful.

Get thee behind me, Biden! Satan in a Dhimmi-crat apparatchik’s suit.

28.9 million Americans watched on TV and via streaming! Isn’t that wonderful!?!?!?

Congrats, less than 10% of the country was watching you.

My wife and kids watch a lot of video / life streaming/net flx, as people have moved away from the TV platform. I personally dont watch TV or very little TV, probably less than 40 hours per year.

Based on my experience, I would expect DNC viewership would be down 40+% from 2016. Especially since both Biden and Harris are dull.

I would also expect the RNC viewership to be down this year by 15%-20%. I wont be watching Mon or Tuesday night, though possibly Wed, I would watch Thursday except its my anniversary I prefer to stay married.

It doesn’t really make much difference. They could be running Elmer Fudd. They plan to steal, or at least delay, confuse and deligitimize the presidential election through mail-in fraud.

How could anyone possibly compete with Hillary’s Coronation???
All dressed in white, the finest Video Production crew, thousands of hired fans, more balloons than I knew were ever made and UN-limited money.
I don’t think anybody will ever top that.

So then, according to CNN, Biden’s lead has slipped to a mere 86%?