The twin culprits in this disinformation campaign are social media and Democratic Party messaging.

It is quite clear the media has completely distorted the risks associated with the Wuhan coronavirus in a quest for click-bait and anti-Trump political messaging.

A Franklin Templeton–Gallup Economics of Recovery Study demonstrates clearly how devoid of reality the press coverage has been. The analysis found that Americans completely overestimate the risk of death associated with the virus.

These results are nothing short of stunning. Mortality data have shown from the very beginning that the COVID-19 virus age-discriminates, with deaths overwhelmingly concentrated in people who are older and suffer comorbidities. This is perhaps the only uncontroversial piece of evidence we have about this virus. Nearly all US fatalities have been among people older than 55; and yet a large number of Americans are still convinced that the risk to those younger than 55 is almost the same as to those who are older.

The twin culprits in this disinformation campaign are social media and Democratic Party messaging.

This, sadly, comes as no surprise. Fear and anger are the most reliable drivers of engagement; scary tales of young victims of the pandemic, intimating that we are all at risk of dying, quickly go viral; so do stories that blame everything on your political adversaries. Both social and traditional media have been churning out both types of narratives in order to generate more clicks and increase their audience.

The study asserts that there is a risk of inflation as the result of people’s willingness to pay more for a perceived safety benefit they do not really need, especially if they don’t have significant risk factors.

Another element increasing the toxicity level of coverage is the suppression of positive news related to coronavirus infections.

An interested reporter might choose to go to the Centers for Disease Control and Prevention website to determine that the number of people in the hospital with laboratory-confirmed cases was lower than it has been since the beginning of the March 21 lockdown, despite the substantially elevated level of testing. 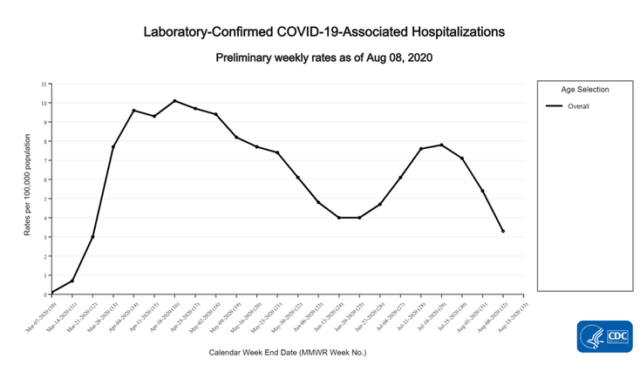 But today’s journalists would rather rely on the latest Tweet when preparing articles.

When you consider all the health repercussions of the press-induced panic (e.g., delays in obtaining needed healthcare due to fear of the virus, the health effects of stress, the psychological impacts of job loss, the possible loss of 100,000 lives due to the negative coverage of hydroxychlorquine), the American media’s coverage has arguably been more toxic than the Wuhan coronavirus itself.

I keep reading reports claiming that about half of US citizens believe that over 30 million Americans have died of the Wuhan flu. My next door neighbor is one of them. I wonder where they get that?

Does your neighbor say that 30M have died or does he give you a percentage? I’ve seen videos of people saying that 10% of the population of the USA has died from covid. I chalk that up to math stupidity.

Here’s a Breitbart article which illustrates my point.

He believes 30 million have died. Rush and Levin and others have talked about that too.

Why would anyone expect anything else? ORANGE MAN BAD.

Pretty amazing that the media—not the government—has become Big Brother.

I’ve been tracking the numbers weekly (I run a public website that shows how to create dashboards).

Bottom line: median age of COVID death in the U.S. is nearly 80 years of age.

Also. a conservative estimate is that at least 44% of deaths have occurred in nursing homes.

As of the week ending 8/22, here are the COVID-death breakouts by age group (with a bit of rounding).

If you take away the forced nursing home deaths, what.does that chart look like

The CDC reported, without a presser, that in fact, only 9,220 deaths in America are attributable to Covid 19 alone. That is 6% of all deaths reported. The rest are attributable to comorbidity. Less anyone is confused, these patients were already on death’s doorstep. That is what morbidity means.
https://www.cdc.gov/nchs/nvss/vsrr/covid_weekly/index.htm?fbclid=IwAR2-muRM3tB3uBdbTrmKwH1NdaBx6PpZo2kxotNwkUXlnbZXCwSRP2OmqsI
Fauci is a fraud, a Democrat agent, and somehow, excused for drastic conflicts of interest for having multiple paid roles and gifted investments in pharmaceutical concerns.

I saw this last night as well, certainly hope we get some type of explanation / clarification that people can actually understand very soon.

If you read through, that’s not quite what the report said.

It’s that 6% of Covid deaths are attributed only to Covid with no other details on how they died. (No other ICD-10 codes.)

Many of the other deaths are also attributed to things like respiratory failure or pneumonia. (Those are two of the top three “comorbidities”.)

It’s like looking at the coroner’s report on a car crash victim and seeing that both “vehicular accident” and “skull fracture” are checked, and then claiming that he wasn’t killed by the car crash because the skull fracture was a comorbidity.

(I do think there are tons of shenanigans going on in the Covid statistics, thanks to really perverse financial incentives, but the social media buzz on this 6% thing is just going to give the press an excuse to call the real problems a “debunked conspiracy theory”.)

there are also 600lb diabetics out there with covid listed as the cause of death. The 6% number can be just as misleading as what is being reported by the government and its slew of alphabet agencies.
One of the issues is the nearly stealth manner in which the data was announced.

All of this pales in comparison to the anti-hydroxychloroquine disinformation campaign. The hydroxychloroquine early-treatment regimen is enormously effective and safe; it’s employment would save thousands of lives and would bring this “pandemic” to a screeching halt – Oh, but that’s the problem with it. The perpetrators of this disinformation campaign are not naive, incompetent or negligent: they are malevolent monsters.

Wait… “Americans overestimate the risk of death from COVID-19 for people aged 24 and younger by a factor of 50; and they think the risk for people aged 65 and older is half of what it actually is (40% vs 80%).”

Do I read that right?

And… it’s not. Clicking through, it’s that 80% of Covid deaths are among those 65 and older.

“Risk of death” is the wrong thing to call that. If the questions they asked people were similarly bad, that could explain their data entirely.

Good catch! I hope you won’t mind if I spell it out, because absolute clarity on this point is desirable:

Let D = all deaths due to the virus, regardless of age group

You forgot the third leg of the tripod – mass media. CNN truly is the enemy of the American people.

If you remember way back at the beginning of covidiocy, several governors banned the use of HCQ for treating it because it would create a shortage for RA and some form of lupus patients who were taking it long term. Over 50,000 such patients.

One thing about the vast majority of those patients- they’re not young people. How effective is HCQ when used as a prophylactic against the dreaded covid? Well, we have a control group. 50,000 or more RA patients who have been taking it long term. What’s their covid infection/death rate? Seems we could know this tomorrow- if the medical establishment wanted us to know. Matter of fact- why don’t we know? I can ask all I want – but I’m just a lowly blog commenter. And it’s an answer I do want.

Sort of like the other control group we have to show that healthy young people don’t die of covid. Active duty military. Have to be healthy to join and serve. Close to 50% AD under 25, less than 10% over 40, about 1.3 million personnel. One whole entire death, 41 year old AOC Thacker from the USS Theodore Roosevelt.

I thought the same on the RA patients, how are they affected by covid?

I just went over to Wikipedia and read what they had on covid, and in their “prevention”, it is dedicated to social distancing and masks.
No mention of HCQ, Quercetin, Zinc..
devoid of useful information altogether.
Now it does bring up HCQ in the medications side at least..
But does not touch on the need for immediate use at onset or the need for zinc.

In today’s news media, every story must be framed as pro-Trump or anti-Trump. Otherwise, the story doesn’t run. Once Trump said a hopeful word about hydrochloroquine, it became the “Trump-touted drug” and had to be discredited. All information about declining Covid infections and deaths had to be ignored and reframed as “fears of a second wave,” to be pinned on Trump. Democrats and journalists (but I repeat myself) act agitated when you suggest that there is any good news involving covid and that its death toll might be decreasing, and that the pandemic will inevitably end.

One of the things that bugs me is the politicization of Hydroxychloroquine.
I have done a lot of reading on it, and it appears to be the best possible preventative and cure when combined with zinc, and if used early on in sickness.
It would appear that Covid, if treated immediately upon outset is less severe than a common cold.
But my doctor won’t budge. And I am having no luck finding any doctor who will prescribe prophylactic dosages, or treat with it either.
So… we are being subjected to being denied a cure to a potentially fatal virus over politics.

Three-quarters of Democratic voters [still] believe that the Trump campaign conspired with Russia to steal the 2016 election, according to a new justthenews daily poll conducted with Scott Rasmussen.

Moving The COVID Goalposts: Will The Next Step Be Masks To Protect From The Flu & Common Cold?

gospace in reply to notamemberofanyorganizedpolicital. | August 30, 2020 at 5:02 pm

Quick answer- yes. The wannabe dictators have discovered that way too many Americans are sheeple.

“If you take away the forced nursing home deaths, what.does that chart look like”

I would like to know the death statistics for people over the age of 80 who are *not* in nursing homes. Everyone who is in a nursing home already has serious health problems.

Not necessarily, nursing homes a lot of times are “warehousing” for seniors till they die, if the kids are willing to do the extra work caring for them they will be with the kids, or health enough their own home

It’s my sense that those poor souls who find themselves in a nursing home quickly lose their will to live. I think that would partly explain the high death rate.