“When you put somebody’s name in print in a book, you want to make sure the facts around it are correct, especially if they are not living because it’s not like Joe is here and he would have known how to deal with this.” 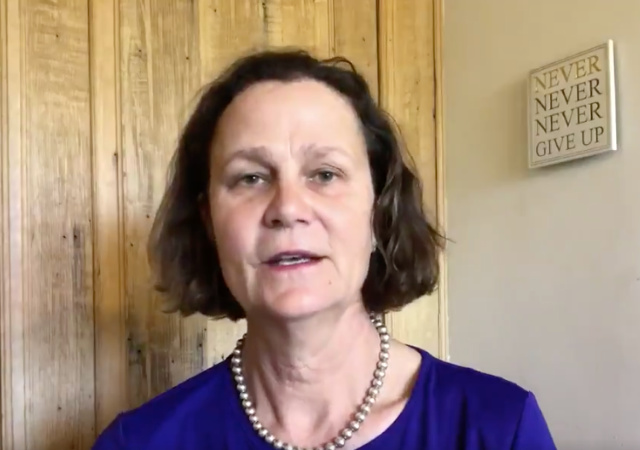 The widow of the man who Mary Trump alleges took the SAT test for @realDonaldTrump says her husband didn’t meet Donald Trump until he was already a student at UPenn — in other words, after Trump took the SAT. https://t.co/Ev4c8GstvS

Mary wrote without any proof:

‘To hedge his bets he enlisted Joe Shapiro, a smart kid with a reputation for being a good test taker, to take his SATs for him. That was much easier to pull off in the days before photo IDs and computerized records. Donald, who never lacked for funds, paid his buddy well,’

Shapiro passed away in 1999 from cancer. He is not around to defend himself, but his widow can still do it:

‘There’s not a chance that he helped Trump with the SAT test,’ she said. ‘He always did the right thing, and that’s why this hurts.’

‘When you put somebody’s name in print in a book, you want to make sure the facts around it are correct, especially if they are not living because it’s not like Joe is here and he would have known how to deal with this,’

Shriver also believes Shapiro and Trump did not meet until Trump was at UPenn, which means after he took the SAT.

Shriver said another journalist asked her about these claims years ago, but refuted them at the time as well.

Trump always tells Shriver that “Joe Shapiro was the smartest man I ever met” when he sees her at tennis events.

The two men “shared a love of golf” and kept in touch “over the years.” Shriver and Shapiro even visited Trump at Trump Tower.

How sad to drag a good man’s name through the mud when he can no longer defend himself. Trump’s niece’s actions are contemptible. What else does she have wrong?

notamemberofanyorganizedpolicital in reply to B Buchanan. | July 8, 2020 at 9:22 pm

How much is that niece getting paid to tell lies?

Weird, well really not, timing to this.

The globalist elitists are smothering to death in their own evil and flailing about for anything.

Sad, contemptible , and vile for sure. But in the end does it make a difference? No, not really. Does anyone really remember any of the books Hillary wrote? Nope. Does anyone remember Comey’s book? Nope. Did Bolton’s book make a difference? Not at all. In a couple of weeks this book will be forgotten and we’ll have moved on to the next manufactured Trump “controversy”. And Mary Trump’s book will be relegated to the Walmart discount bin with all the rest of the unread tell-all books written by the rabid leftist lunatics – waiting to be returned to the publisher to be pulped for another book.

It was Ted Kennedy that paid someone to take a test and Kennedy was expelled for it until late ron he was rehabilitated with teh help of Joe Kennedy’s generosity.

That’s when he did his stint in the military, in the safest job his father could buy him.

At the end of his second semester in May 1951, Kennedy was anxious about maintaining his eligibility for athletics for the next year, and he had a classmate take his place at a Spanish exam.

She must need money bad. Wonder why?

Why must she need it bad? Money is always nice. What’s the down side for her? Anyone who cares about the truth is probably not someone she wants to know anyway.

She may not need it that badly; she may just be one of those women who like to set people against one another, then stand back and enjoy the misery she causes.

She may want attention.
Blasey-Ford comes to mind.

The story I’ve heard is that Uncle Donald had her sign an NDA as a prerequisite for her trust fund.

Trump would have taken the SAT about the time that I did. Photo IDs were definitely required.

Not only that, he was a Fordham transfer. He would have taken the SAT two years earlier, before Fordham, and not thereafter, as no new SAT exam would be taken for the Penn application.

Details only matter if they’re against Trump.

I am around 20 years younger than Trump and also took the SATs in NYC and do not recall the need for a Photo ID. At SAT time all that I had for photo ID was a student ID which would have been easy to forge anyway. We never had to show photo ID for anything unless we were trying to sneak into a bar.

N.Y. Didn’t have pictures on their licenses until the late eighties/early nineties.

Ditto. And since he went to a private school the examiners knew him by sight and name like they did at my school.

Ditto to the private school thing. Tests were administered at the school by teachers who knew everyone by sight.

When I took the SAT in NY the tests were given at assigned sites, not at our HS.I didn’t know any of the moderators.

Thank you. Because now CNN is claiming “it was a different Joe Shapiro”. Verified! /sarc

It is helpful to remember that DJT flogged Hillary and probably saved America.

DJT is NOT part of the Washington complex and that same complex cannot contend with the fact that they no longer own the system.

So according to the story ID helps prevent fraud. Good to know. We might want to require ID to vote.

Nope. Not in character for DJT. He’d like his own answers, better.

This is a well-educated man, and a reader. The SAT would not have cowed him in any way.

Also, he had money, so he could do poorly on the SATs and still get into the school he wanted.

When you put somebody’s name in print in a book, you want to make sure the facts around it are correct, especially if they are not living

Morally she’s right, of course, but legally it’s exactly the opposite. If Joe Shapiro were still alive Mary Trump would have had to be careful what she wrote about him, because he could have sued her for this allegation. But since he’s safely dead, and thus legally he can’t be defamed, she had no need to take any care and could just write whatever she liked.

Sort of like Mueller indicting a dozen or more Russians to propagate the #RussiaHoax because he(The Democrat Hit team ghost writing the Mueller attempted coup) believed there would be no way they would ever show for trial. I believe they were all surprised and got a sound spanking for that misconception.

Resurrection is not possible in this case but can someone in Shapiro’s life have basis to claim standing?

“A lie can travel around the world and back again while the truth is lacing up its boots.”

Trump went to a military school. Did Shapiro put on his uniform? They had an honor code. He would have been reported by most of the class.

Erin Burnett @ErinBurnett · 4h Mary Trump is under gag order. So her friend Alice answered the Qs about Trump paying someone to take SAT. Says it was NOT the Disney Joe Shapiro (Pam Shriver’s husband). Notes name common on East coast. Won’t say if he’s alive. To be clear – Mary 100% stands by story and details

Well, it’s true that there are a lot of Joe Shapiros. But come on. That’s lame.

She has a family grudge about the estate settlement. Just another lying Dem.

I would hope someone as accomplished as Pam Shriver would merit a more significant description than “a former tennis pro”. How about 22-time Grand Slam champion and Olympic Gold Medalist. She was one half of the greatest doubles team ever (she and Martina Navratilova won twice as many Grand Slams as the Williams sisters).

Obviously, this SAT story is nonsense, but the story of abuse is the greatest possible source of real pain for Donald Trump.
Was it sexual .. or “snowflake” mental abuse or perceived abuse.

Nope. If you can impeach one part of the story, you impeach the credibility of the rest of it if it’s not backed up with solid evidence.

“At the end of his second semester in May 1951, Kennedy was anxious about maintaining his eligibility for athletics for the next year, and he had a classmate take his place at a Spanish exam.”

When the fraud was discovered, both students were expelled. Kennedy’s family got him readmitted, but the other student was not readmitted.

Disgruntled niece’s can be the sorriest people on earth. Only a fool wouldn’t immediately recognize its all about the money. And or the lack thereof. Mean old uncle Don wouldn’t finance my start up like he did cousins Hank’s. I still think there a ton of money to be made in recycling baby shoes but uncle Don doesn’t love me like his other kin.