Is anyone else glad Trump cut off funding to WHO? I sure am! 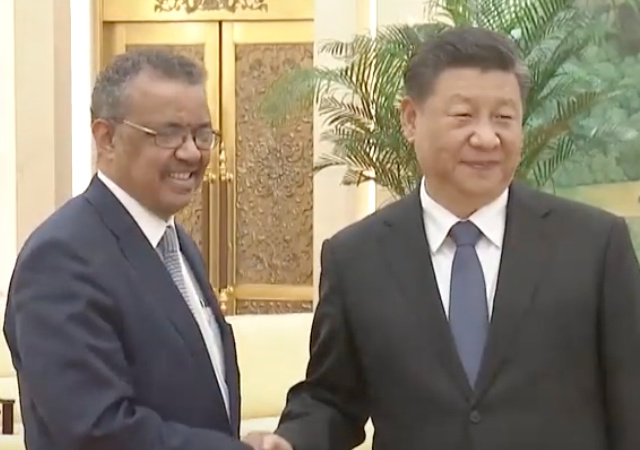 For months the World Health Organization (WHO) insisted that China self-reported the Wuhan coronavirus in December 2019.

Well, just the other day, WHO quietly changed the virus in the timeline on its website.

Guess who did not bring the virus to WHO’s attention? China.

The Country Office notified the International Health Regulations (IHR) focal point in the WHO Western Pacific Regional Office about the Wuhan Municipal Health Commission media statement of the cases and provided a translation of it.

WHO’s Epidemic Intelligence from Open Sources (EIOS) platform also picked up a media report on ProMED (a programme of the International Society for Infectious Diseases) about the same cluster of cases of “pneumonia of unknown cause”, in Wuhan.

Several health authorities from around the world contacted WHO seeking additional information.

So officials only learned about the coronavirus after doctors working in Wuhan posted about the virus on a U.S. website.

WHO even tried to use the obvious lie to shame Taiwan for bringing up the fact that the organization ignored the country’s please for answers on the virus:

Taiwan claims it emailed WHO on Dec. 31 to request information on the outbreak in Wuhan, and asked if the virus could be transmitted between people. Taiwan, which is not a WHO member, alleged that the WHO never replied to their email, which robbed it of valuable time to prepare for the coronavirus outbreak.

In April, the WHO responded to Taiwan’s allegations by saying, “We have asked how they communicated this to us, because we are only aware of that one email that makes no mention of human-to-human transmission, but they haven’t replied.”

“The first report came from Wuhan, from China itself, so Taiwan was only asking for clarification, and as some people were claiming, Taiwan didn’t report any human-to-human transmission; this has to be clear,” WHO Director-General Tedros Adhanom Ghebreyesus said in April. “So, the report first came from China — that’s fact number one — from Wuhan itself.”

To think if WHO actually did its job how much better off everyone would be right now.

The change comes after the Republicans on the House Foreign Affairs Committee released its report Interim Report on Origins of COVID-19 Pandemic.

“I’m glad to see the WHO and the Chinese Communist Party have both read my interim report on the origins of the pandemic and are finally admitting to the world the truth — the CCP never reported the virus outbreak to the WHO in violation of WHO regulations,” McCaul said in a statement to the Washington Examiner. “The question now is whether the CCP will continue their false propaganda campaign that continues to claim they warned the world or whether they will come clean and begin to work with the world health community to get to the bottom of this deadly pandemic.”

The WHO is just like every other UN organization in existence – WORSE than useless.

They’re not just incompetent, they’re utterly corrupt, and not only do nothing useful, they actively give cover and legitimacy to outright evil regimes while lying or hamstringing any actual useful response.

We’re decades past the point the UN should have been expelled from the US.

Was WHO lying then, or are they lying now, most likely both. We should probably kick the UN’s sorry ass out. Stop wasting American money on those losers.

Maybe we should look a creating a smaller, tighter knit organization?

“We’re decades past the point the UN should have been expelled from the US….”

We see why the left loves the UN: because they are all adverse to America.

“So officials only learned about the coronavirus after doctors working in Wuhan posted about the virus on a U.S. website.”

What about those doctors? Do we need to worry about their safety, and that of their families?

No nee any more to worry about their safety.

I believe what Petrushka is trying to say is, “no need to worry” because…

Most of the original Dr.s trying to get the word out are now dead or re-educated.
Dr. Li, deceased, should be raised up each and every day. I do not name those I believe to still be alive for their safety.

I think perhaps we should worry extensively for any health care workers currently working in China.

So World Health volunteered to notify the world on behalf of the Chinese government, and to parse the announcement as if the Chinese had initiated it through channels? What a good little employee they are to direct social credit in such a way.

Mary, thank you so very much for you work on our behalf.

I find I lack the ability to figure much out these days.
Of course I do not blame myself too much, most of my Information seems to be lies.

Your efforts to find some data instead of opinion or policy is a blessing to me.

A Happy & Safe Independence Day to you and your family.

This is yet another case where President Trump was right. Sadly, I live in a country where Trump derangement is not only widespread among the media, it is almost universal.

The media in both Canada and the United States will do its best to bury the story.

And this surprises who? (Pardon the pun.)
.

EXCLUSIVE: We Know the Democrat and Deep State Reactions to the China Coronavirus Are a Sham Because the Garbage Data is Hidden and Because Joe Biden is Failing
By Joe Hoft

Wake up America – the Democrat’s and Deep States responses to the China coronavirus are intentionally non-transparent and are based on data that is total garbage. This is what Democrats feel they must do to prevent a total drudging of their senile candidate Joe Biden in the 2020 election.
Why is it that nothing surrounding the China coronavirus makes sense?

My parents friends went to get tested for coronavirus. They waited in line for two hours and then decided to leave without getting tested.

Hours later they got a phone call saying they tested positive.

They are lying about coronavirus numbers in Texas. Quite disgusting.

“This Is Not Just Accidental”: How One Coronavirus Mutation Helped The Virus Conquer The Globe