There will still be events, starting in North Carolina, and an acceptance speech, but no large convention in Jacksonville. 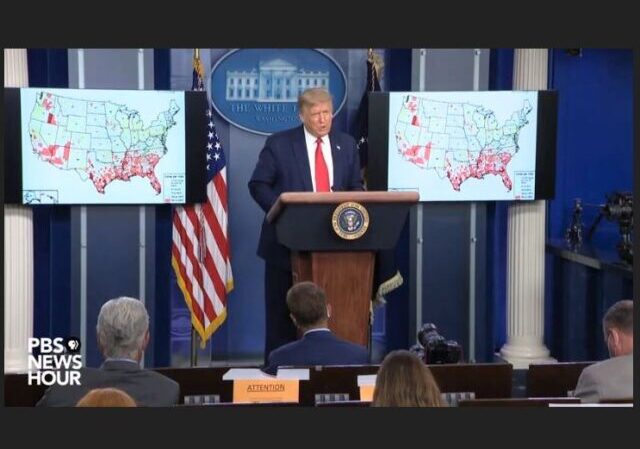 Trump just announced there would be no large in-person Republican National Convention in Jacksonville due to the threat of the coronavirus.

There will be events, just no large gathering as originally planned:

President Donald Trump said he will no longer hold a large, in-person Republican convention in Jacksonville, Florida, because of the coronavirus but will hold virtual events and still give an acceptance speech.

“I told my team it’s time to cancel the Jacksonville, Florida, component of the G.O.P. Convention. We will be starting in North Carolina for the Monday, as has always been planned, we were never taking that off,” Trump said at a press conference at the White House Thursday afternoon.

Trump said that it was “not the right time” for a big convention, adding that he had “to protect the American people.”

“People making travel arrangements all the over the country, they wanted to be there,” he said.

Trump’s plans for Jacksonville appeared to be in peril earlier this week when the city council president raised safety and health concerns and threatened to oppose a key funding bill for the convention.

Trump said he had spoken with Florida Gov. Ron DeSantis about his decision and said that he would still do a convention speech in a “different form,” not the arena event he had hoped for.

He said that DeSantis did not ask him to cancel the convention, but he decided to do it anyways for safety reasons and for the media backlash he thought he would receive.

I’m not sure he had a lot of choice politically. A large gathering was too risky even if there was no documentable spread because of it. While I think the polls are overstating Biden’s lead, there’s no doubt that Trump needs a restart. Having Brad Parscale as campaign manager was fighting the last war; replacing him was right. He also needs to get control not only of the virus, but the virus narrative. If the economy comes back strong in the fall, Trump likely wins. If the economy turns south (pun intended) and the RNC convention takes the blame, he probably loses.

Worse yet, it strengthens the Progressives / Democrats pretense to force mail-in ballots “cheat by mail.”

They know they can’t win an honest election — this will help the steal it.

God help us — if the Dems get the White House and Congress we’re irreversibly heading for Venezuela status.

He must know something we don’t.

Imagine non-stop coverage of out of control riots at the RNC … attendees beaten – POTUS unable to attend or evacuated … one heck of a PR nightmare and turns the RNC into a continuation of the George Floyd / BLM / Antifa protests.

You mean, the 1968 D Convention? Didn’t seem to have hurt them. (What hurt them was the 3rd-party Wallace candidacy.)

I’m over-tired of the “4D-chess” excuse. The man’s making a raft of bad decisions lately. He’s alienating his own base. I hate to say it, but I think the Swamp has neutered him.

IMO, this decision is the culmination of the pivot taking place this week. PDJT has restarted Rona briefing, encouraged folks to wear a mask if they can’t distance, to follow the basic hygiene protocols, gave a Rona interview on Fox.

He is attempting to remove d talking points and MSM slings and arrows. At a minimum he has defused the ego over safety argument.

The pivot is back to law and order discussion. PDJT benefits from that discussion.

If anyone believes that staying home on election day or voting for someone other than PDJT will result in less government power, less taxes, less dependence on China let me simply say that you are wrong.

Please don’t help our opponents impose their radical vision upon our Nation. Withholding your vote will hurt us all.

I’m as tired of all the BS as anyone else, but why am I supposed to care about a convention? I never watch them, never attend, what do they actually accomplish? It’s not the 19th century anymore, I don’t understand their use.

I mostly agree. Save the money for TV ads. The only thing conventions are good for are the speeches (Think Ronald Reagan’s speech at the 1976 convention). But those can be watched and heard on YouTube.

“If the economy comes back strong in the fall, Trump likely wins. If the economy turns south (pun intended) and the RNC convention takes the blame, he probably loses.”

Why do the pundits assume that during this pandemic we are going to use the ordinary rules of how the economy is doing to elect the President?

Is there any thought in pundit-land that the American people understand the economy is not at the moment due to political choices?

It really makes me angry that the pundit class has “rules” that they think are so iron-clad about for example Elections-Economy that even an UNPRECEDENTED think like COVID-19 makes everyone play by the same political rules as if nothing was happening.

Please stop with the “Its the economy stupid” when there has been an economic shutdown like this that EVERYONE is well aware of.

I cant understand why Trump is playing right to the Democrats. We know this virus is not really worse than other seasonal viruses we have had and suddenly he is wearing masks, stating things will get worse, and shutting down the convention. Is he giving up? If he has no rally’s then he cannot speak to the people. I think the new campaign manager is going to lose this election for him if he is the one promoting this new behavior!

Seriously? Oh come on! Get out there and win this election!