One of his secretaries accused him of sexual harassment. 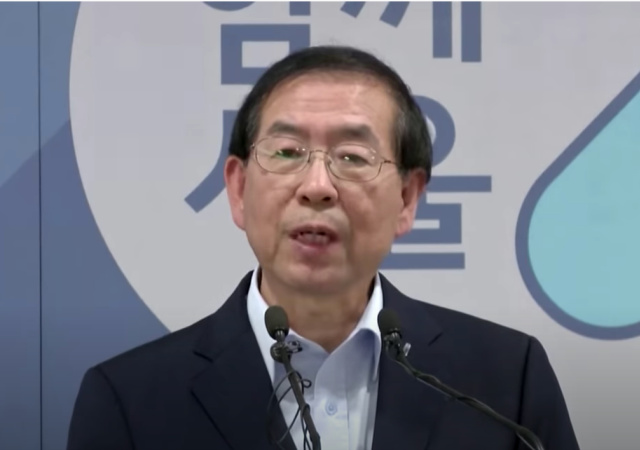 Seoul Mayor Park Won-soon went missing on Thursday before they found his body on a mountain. Police found a suicide note:

“I send my apologies to everyone. I thank everyone who shared my life. I am so sorry to my family to whom I only gave pain,” read the apparent suicide note left on the desk of his official residence and released by the city government with the permission of his family.

Park left behind a wife, son, and daughter. Park became well known and rumors swirled he might have run for president in 2020.

Park once worked as “an activist, women’s rights advocate, and a lawyer.” NBC News continued:

As a lawyer in the 1990s, Park won one of South Korea’s earliest cases on sexual harassment. During his career, Park also strongly advocated for the cause of “comfort women” who were forced to work in Japan’s wartime military brothels during World War II.

In addition, Park was an outspoken advocate of gender equality. Amid the #MeToo movement in 2018, he had praised South Korean women for their courage after a series of women accused powerful politicians of sexual wrongdoings.

One of Park’s secretaries filed a complaint with the police on Wednesday night, alleging he sexually harassed her since 2017:

A programme on the previously unreported accusation was due to be aired on Thursday.

A document purporting to be the statement from Won-soon’s victim, who worked as his personal secretary from 2015, alleged he committed ‘sexual harassment and inappropriate gestures during work hours’.

The claims include insisting she hug him in the bedroom adjoining his office.

After work, she said, he sent her ‘selfies of himself in his underwear and lewd comments’ on a messenger app.

‘I brainwashed myself, bearing tremendous fear and humiliation, that all of this was in the interest of Seoul City, myself, and mayor Park,’ she claimed in the document.

What’s his connection to the Clintons? To Epstein?

beat me to it by moments.

If only US politicians could find this sense of honor

If US politicians had such honor, we would be conducting special elections. Think about the swamp committing suicide in mass.

Unlike most fake male feminists, he actually did some good work it appears to advance their cause.

Like them, it appears that he might have used his work as a shield for his own issues.

Hell, I never trusted the women who took them, either.

Though having a code of honor that would drive one to suicide over the mere threat of public familial humiliation is extreme, it seems to me it might be better than the apparent complete absence of honor in our society. People in the U.S. are no longer taught a set of morals unless it comes from the family (a structure that is increasingly uncommon here, obviously), or a theological institution. As much as the Catholic Church has failed children over the years, I give private Catholic school much credit for giving me a moral compass that allows me to plainly see the pervasive and growing Godlessness in our society. I’m still no Saint, and I certainly had my share of running wild as a youngster, but there is no denying how bad things are and appear to be heading. Gone are the days of common sense and respect for others, and true righteousness has been twisted into something incomprehensible and unrecognizable.

Either hold office, or break all the critically important, inviolable rules.

Just don’t do both, unless, like Mayor Park, you’re honorable to a fault.

Which invites the question: was he clinically depressed well before his suicide? If so, that might explain his norm-and-honor-violating behavior, then, as “logical” — planned and implemented toward its intended, albeit irrational, coda.

I wouldn’t be surprised if, assuming it could be determined, a quarter or more of Seoul’s political leaders are similarly afflicted, given the stress and strain of daily existence there, just 35 miles south of the DMZ.

Perhaps the South Koreans possess an inordinately high degree of personal responsibility, and conscientiousness, and maybe further, decency and the ready capacity to feel shame.

And he didn’t think him committing suicide would bring painters family?