“You are talking drug-fueled parties, overdoses, deaths, people are being assaulted. You have sexual assaults going on, it is pandemonium” 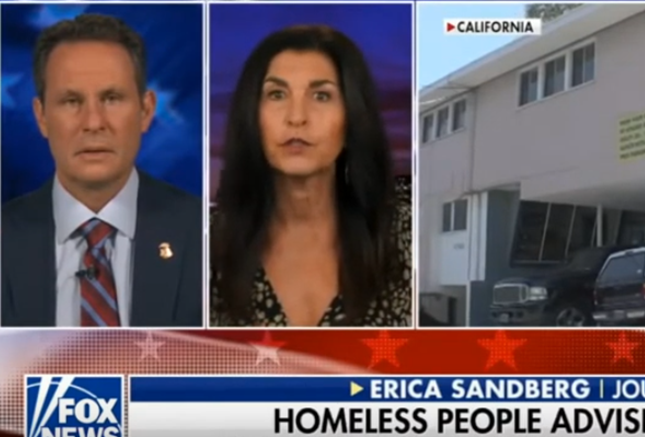 During the initial phase of California’s Wuhan coronovirus closure, San Francisco and state officials decided it would be a great idea to use taxpayer dollars to rent hotel rooms for its homeless.

The experiment is working out as well as most sensible people expected.

Thousands of homeless people have been housed in San Francisco’s empty hotels in an effort to slow the spread of coronavirus.

However, City Journal contributor Erica Sandberg told “Tucker Carlson Tonight” on Wednesday the policy has been an “absolute disaster,”

“It’s solving exactly nothing and as a matter of fact, it’s making all the problems worse,” said Sandberg, who described the scene inside the hotels as “about as bad as you can imagine, only exponentially worse.”

“You are talking drug-fueled parties, overdoses, deaths, people are being assaulted. You have sexual assaults going on, it is pandemonium,” she said. “It is extremely bad and it needs to stop.”

City officials reportedly secured close to 5,000 rooms at several city hotels that signed up to house homeless and other members of at-risk populations who need to quarantine.

The plan is called “Project Roomkey.” Three-quarters of the funding for the hotel rooms comes from the Federal Emergency Management Agency, while the remainders is financed by the state government.

It is also being reported that the homeless residents of these hotels are also receiving alcohol and cannabis bought by tax dollars as well.

The city’s Department of Public Health is giving alcohol to guests struggling with addiction and facilitating the delivery of cannabis.

“I just found out that homeless placed in hotels in SF are being delivered alcohol, weed, and methadone because they identified as an addict/alcoholic for FREE,” Thomas Wolf, a drug counselor in San Francisco, tweeted on May 1. “You’re supposed to be offering treatment. This is enabling and is wrong on many levels.”

According to San Francisco’s health department, which staffs the hotels, funding for these substances in the hotels comes from private donations. But Contra Costa County, about an hour outside the city, has spent up to $1,000 in public funding so far on substances for vulnerable residents sheltering in hotels.

Officials from both health departments say the practice of administering drugs and alcohol has prevented people from leaving the hotels to retrieve substances, thereby limiting the potential for the virus to spread.

“This program was put in place in order to support isolation and quarantine practices for patients under investigation or those who were positive for COVID-19, so that they do not break their isolation and expose other members of the community,” Dr. Ori Tzvieli, Contra Costa county’s deputy health officer, told Business Insider.

San Francisco had leased 2,407 hotel rooms as of Tuesday — 1,860 of which were occupied, according to state data. Now, there are plans to relocate 200 homeless into rental units.

San Francisco will move 200 homeless residents out of the hotels where they’ve been temporarily sheltering during the pandemic, and into housing, Mayor London Breed said Thursday.

The announcement marks the city’s first step toward answering a question that has plagued activists and experts for months: What will happen to homeless community members once the coronavirus crisis is over, and temporary shelter programs end?

Likely, many more affordable units will be opening up as well-paid tech workers leave the city to work remotely on a permanent basis.

Coronavirus-related work-from-home policies at the country’s biggest technology companies appear to have caused an exodus from Silicon Valley, which has sent rent prices in San Francisco plummeting.

Rents for a one-bedroom apartment in the major metro area were down 9.2 percent in June when compared with the same period last year, according to data from rental site Zumper. That is the largest decline since at least 2015 and brings the price point ($3,360) down to where it was three years ago.

In the U.S. overall, one-bedroom rents fell by just 0.2 percent. No other major metro city’s data came close to the decrease in San Francisco.

Its hard not to laugh at their stupidity

Insanity is the new pandemic !

“Three-quarters of the funding for the hotel rooms comes from the Federal Emergency Management Agency, while the remainders is financed by the state government.”

Yes, it is OUR stupidity.

WTF has that GOP hack Rhona Romney done for us lately??? Or EVER??? WHY is she the head of the GOP – other than to sabotage us??

Not “our stupidity”. It’s our money, stolen from us by badges and guns of a government our founding fathers would never have tolerated.

“We” (the sane ones) keep electing these criminals.

Perhaps we should revisit our definition of “sane”.

How can you be sure it’s unintended consequences? The left love abuses being fueled to keep those votes firmly bought for the plantation.

I am sure they will all be registered to vote before December and will continue to vote even aftyer overdose deaths for many years.

how much per night is the taxpayer ponying up per room?

Probably more than any of us pay for our houses or apartments on a per night basis.

Side-note: California would probably make this illegal, but there should be a website dedicated to listing all the places where they housed the homeless. Would any of us ever want to go to one of these hotels–even if they claimed it was fully-cleaned?

Milhouse, are you sure about that? I mean, look at what they have done to the Second!

California courts enforce the second amendment, at least to some extent. And they certainly enforce the first amendment. So do federal courts in California.

Why are we subsidizing Newsome’s blatant stupidity?

We have a choice?

Our will is our only obstacle.

Time for our wull to, well… triumph.

We do not have functioning government in any democrat controlled state as far i know. Please name one.

So the hotel is now a Section 8 property?

The idiots in charge don’t care! It’s not their money! If you pay taxes, and only about half of the population does, you are paying for this foolishness.

This is the communist takeover plan of private property.

If you own a hotel or motel: your property will be taken and WITHOUT just compensation.

The army of street people is being built for a reason.

$3,300 a month for a 1 bedroom apartment? Yikes. That’s more than 4x my mortgage on a pretty nice house. I knew prices were higher, but that’s insane.

A six-digit income goes pretty far in most parts of the country. On the urban west coast, it’s barely enough to get by.

And good luck finding decent real estate, and even better luck closing a mortgage deal on it before some millionaire celebrity or tech corp executive ponies up a cash offer and buys it out from under you.

Liberals screw up a fine idea like private property.

…to further spiral into their self-destructive tendencies.

Another Democrat dystopia…you can’t make it up…

Housing prices have ‘plummeted’? Not sure if a less than ten percent drop counts as a plummet.