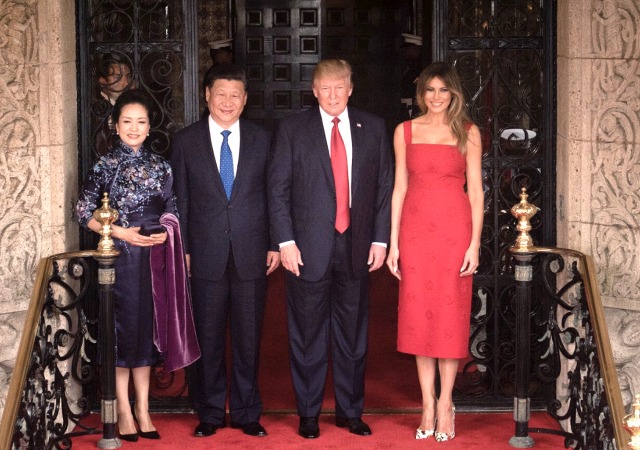 A Pew Research Center poll found the majority of Americans blame China for its role in spreading the Wuhan coronavirus.

The poll also revealed most Americans have an unfavorable view of China.

From The Pew Research Center:

Americans’ views of China have continued to sour, according to a new Pew Research Center survey. Today, 73% of U.S. adults say they have an unfavorable view of the country, up 26 percentage points since 2018. Since March alone, negative views of China have increased 7 points, and there is a widespread sense that China mishandled the initial outbreak and subsequent spread of COVID-19.

Around two-thirds of Americans (64%) say China has done a bad job dealing with the coronavirus outbreak. Around three-quarters (78%) place a great deal or fair amount of the blame for the global spread of the coronavirus on the Chinese government’s initial handling of the COVID-19 outbreak in Wuhan.

More Republicans and Republican-leaning independents think “China has done a bad job” and a very bad job at handling the coronavirus outbreak:

Republicans and Republican-leaning independents are significantly more likely than Democrats and Democratic leaners to say China has done a bad job dealing with the coronavirus: 82% vs. 54%, respectively. And they are about twice as likely to think China has done a very bad job (61% vs. 30%). Older people, too, are more critical, with 73% of those ages 50 and older finding fault in China’s pandemic response, compared with 59% of those 30 to 49 and 54% of those under 30. But education has little relationship to how people think China has handled the novel coronavirus: Around two-thirds of those with and without a college degree say China has not done well in its response.

The unfavorable views of China went up 7% from March.

Those who have very unfavorable views of China hit a record high of 42%. The same question only saw 23% of Americans with that view.

The other thing is that the negative view spreads across all demographics.

The economic ties between the U.S. and China influenced some answers:

More Americans also think the U.S. should hold China responsible for the role it played in the outbreak of the coronavirus (50%) than think this should be overlooked in order to maintain strong bilateral economic ties (38%). But, when asked about economic and trade policy toward China, Americans are slightly more likely to prefer pursuing a strong economic relationship (51%) to getting tough on China (46%). Still, more support getting tough on China now than said the same in 2019, when 35% held that view. 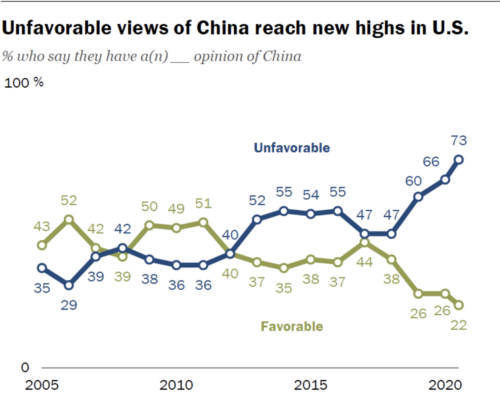 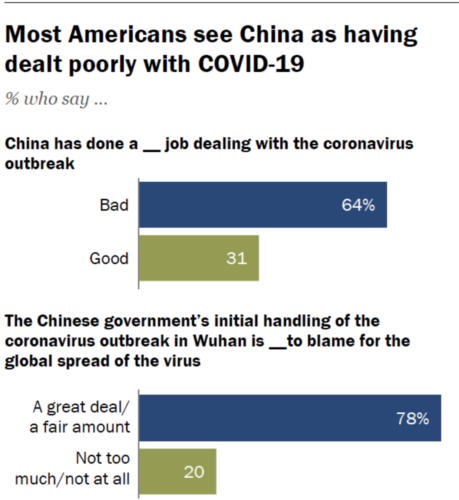 It pleased me to see that 77% of Americans prefer to promote human rights in China over economic ties.

Communist China threw down its iron first in Hong Kong with a national security law. The world is finally paying attention to the detention of Muslim Uighurs and the mistreatment of Africans.

That poll is nothing to sneeze at MSN and DNC!

notamemberofanyorganizedpolicital in reply to legacyrepublican. | July 31, 2020 at 2:05 pm

legacyrepublican in reply to notamemberofanyorganizedpolicital. | July 31, 2020 at 2:45 pm

henrybowman in reply to notamemberofanyorganizedpolicital. | July 31, 2020 at 9:04 pm

My Senator, Martha McSally, is all goo-goo in her newsletters about how she’s ramming through a bill to “Allow Americans to Sue China over the COVID-19 Pandemic.” I, for one, cannot wait to instruct my strip-mall shingle to pull out all the stops and take on the largest country on the globe. On a contingency basis of course.

Any story with a picture of our First Lady is worthwhile.

Here is a story from Newsweek about CV19 from before the entire media was trying to pin it on Trump. According to this report, WHO paid the Wuhan Institute of Virology to preform GAIN OF FUNCTION experiments with Respiratory Viruses.

The devil imp lying Dr supposing gave 3 million, he’s up to his eyeballs in this murder virus

The Chinese committed one of the worst sneak attacks in history with the Wuhan virus. The minute they shut off transportation in and out of Wuhan, domestically, and not only kept it open internationally but berated countries that tried to ban travel with China they used the Wuhan virus as a bio-weapon in one of the most outrageous (and certainly the costliest) attack on the world, and the West, in particular. This was an intentional attack by the Communist Chinese on America. A bio-weapon attack. There is no question about this.

It is a shame that there will not be a commensurate retaliation – which would, at the very least, leave Beijing as a sheet of glass. China is making a note of the West’s refusal to retaliate for a clear attack and they will take care to make sure the next one be something much more than a virus with a Black-Death-like 0.26% kill ratio that hates octogenarians.

Even so, the Wuhan virus (and subsequent copying of the communist Chinese response by our leftist politicos) has caused America to incinerate close to $10 TRILLION … the effects of which have not even begun to be felt, yet. People have no idea what’s coming. When they do they might all change their minds about what sort of retaliation Communist China deserves for the attack.

Eye of bat and toe of bat /
Wool of bat and tongue of bat /
Fire burn, and cauldron bubble /
Lunch for two, if it’s no trouble /
That’s our story and we’re sticking to it.

China has bought Biden and Pelosi which guaranteed that there won’t be a united response to their attack with a WMD.

Communist China threw down its iron first in Hong Kong with a national security law. The world is finally paying attention to the detention of Muslim Uighurs and the mistreatment of Africans.

I have to say, I really don’t care about any of that. Hong Kong belongs to China. Everyone knew this was going to happen back in 1997. Those who stayed were idiots.

As to the muslims in China, I really could not care less. Honestly. There are 57 muslim nations in the world and trillions of dollars at their disposal. They can take care of their own.

And the Africans are not my problem. They invited the Chinese in. Tough. They have to solve their own problems at some point.

All I care about China is how they are an enemy to America, cheats in business and commerce, and how they have carried out one of the worst Acts of War in intentionally allowing the movement of Wuhan infected people back and forth to us in a sneak attack that makes Pearl Harbor look like a frontal assault that was called in with a warning a week ahead. Those are my problems with China and they are HUGE.

Maybe there is hope for us yet. Not sure, however, how much.
.

Wow. 73% of the population is racist. I guess the shame campaign (to make us be better people) hasn’t worked.

No, it’s just provided incentive to the tarred to become the best racists we can be.

Some, more palatable facts not as easy to deny to fit worldview. Of course, if this was a Trump vs China poll it would go the other way.