Three weeks ago, 100,000 gathered for LA’s BLM protests. Now, for some strange reason, the LA area is seeing a surge in coronavirus cases. 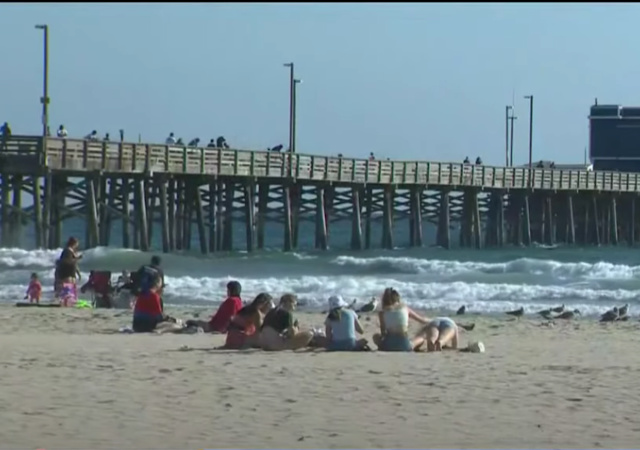 Three weeks ago, the Hollywood media proudly proclaimed that over 100,000 attended the Black Lives Matter rallies in Los Angeles.

After more than a week of protests against police violence following the death of George Floyd, Los Angeles saw its largest demonstration so far flood the streets of Hollywood on Sunday. An estimated 100,000 people attended the march, according to Black Lives Matter Los Angeles, which organized the action along with BLD PWR and the rapper YG.

Early crowd size estimates by the LAPD placed the number around 20,000, though the throng of protesters stretched unbroken from the TCL Chinese Theatre all the way to Vine Street and beyond. In addition to the march in Hollywood, Sunday saw dozens of other protests throughout the city, including in downtown Los Angeles, Beverly Hills, and Compton.

Therefore, it should come as a surprise to nobody with even a modicum of reasoning ability that cases of the Wuhan coronavirus are surging in Los Angeles now.

There were new danger signs Tuesday that the novel coronavirus is spreading more rapidly through Los Angeles County as officials reported the third straight day of more than 2,100 additional confirmed cases.

“The L.A. County community needs to come together again to slow the spread of COVID-19, and we need to act with haste and urgency,” L.A. County Public Health Director Barbara Ferrer said in a statement.

I am not among the risk-averse who are worried at this point. The Centers for Disease Control now says the country has ‘way too much virus’ to control the pandemic. Additionally, it looks like herd immunity may be achievable with fewer infections than initially thought. So, protect the vulnerable, practice good hygiene, and use common sense until scientists develop a vaccine.

Despite the fact the experts now deem that the virus can no longer be contained, California Governor Gavin Newsom is pulling the COVID-trigger. He canceled fireworks and other activities enjoyed by millions of non-protesting and social-distance-practicing Californians ahead of the July 4th holiday.

The governor is imposing the restrictions on indoor activities in advance of the July 4 holiday weekend, when officials fear disaster if Californians continue to ignore safety guidelines and businesses remain open in areas already experiencing significant spikes in COVID-19 infections. Newsom is also recommending the cancellation of all fireworks shows on the Fourth of July in the affected counties, and is urging all Californians to rethink having large get-togethers with friends and neighbors to celebrate the holiday.

“This doesn’t mean restaurants are shut down,” Newsom said. “It means that we’re trying to take the activities, as many activities as we can — these mixed activities, these concentrated activities — and move them outdoors, which is a way of mitigating the spread of this virus.”

In California, the only fireworks that can go off are those associated with looting and rioting.

Los Angeles County beaches will also be closed during the holiday. However, many good people are tired of the clearly useless and political restrictions and are beginning to push back against the new rules….including the Los Angels County sheriff.

Los Angeles County Sheriff Alex Villanueva said Monday that he will not enforce the county’s order to shut down beaches over the July 4th weekend, according to Bill Melugin of Fox 11.

Villanueva told Melugin that his department was not consulted before the order was put in place.

“We were not consulted on the beach closure, and will only assist our beach cities in closing parking lots and traffic enforcement on PCH. In regards to enforcing the beach closure, we will not be enforcing it because we are ‘Care First, Jail Last,’” Villanueva told Melugin, according to a tweet.

I suspect the sheriff will not be the only Californian ignoring the latest pandemic panic inanity.

The open space is an effective distance multiplier (no greenhouse effect) without the social distancing forced by masks (with progressive value) and physical separation. Also, there is evidence that the virus, formerly from Wuhan, is spread primarily through manual, not aerosol paths. Wash your hands, keep unsanitized hands away from the mouth, nose, eyes, lesions, and open holes, especially after contact with fecal deposits.

It is a scientific Socialist fact that the COVID-19 cannot infect communist protectors. Ask the Union of Concerned “Scientists” or even CNN. I’m sure Lancet will publish an article as credible as its hydroxychlorquine study on the subject.

It is the first known virus with a political affiliation.

I’ve been assured that the BLM riots had no discernible impact on Conoravirus case counts according to a study published by the National Bureau of Economic Research.

Meanwhile back at the ranch …
In MN, the cases have been declining for all age groups, except 20-29 (age of Antifa child-adults) which is now twice as large as two weeks ago.

The recent discussions about mask wearing seem to revolve about how you are slowing the spread of your coughing to others. Slowing – but not eliminating the spread since the masks are not good for blocking the small virus particle.

With the protests, there are many people with masks but I sense the primary purpose is to avoid recognition, not to impact the C19 spread. There are many without masks and yelling, some directly into the faces of the police and others.

I don’t see a lot of hand washing stations or sanitizer bottles out there. And, I have to wonder what the spread of the virus is to the unprotected eyes and faces. How many people are pulling down their damp masks and then wiping their faces, etc. I would have to wonder how clean those masks are after a couple hours of protests and how they take them off and dispose or clean them.

Those people on the beaches – many seem to have their 12×12 tents, which gives them some social distancing. Of course, the news people use the photo lens which shortens up the distances to make it seem like there is no distancing.

They were defunded, so officers are taking the day off. Probably to go the beach.

(hoo hoo see what I did there?)

I think the sheriff’s refusal might have a little something to do with his ongoing feud with the Board of Supervisors. The board has limited his authority to some extent and just cut his budget. Villanueva has rehired deputies fired for misconduct and he’s an arrogant … ; the supervisors are power-hungry feudal ladies (ladies used for parallel construction purposes only) and lord. It’s hard to know which party to support, but the preponderance of the evidence favors the supervisors by the proverbial weight of a feather.

The conversation must have been fun. (paraphrased)
Board: We want you to shut down the beaches.
Sheriff: That’s going to be quite unpopular, and require a lot of overtime. Why?
Board: Evil virus.
Sheriff: You know, sun-soaked beaches with people a fair distance apart don’t contribute much to C19 spread.
Board: Do it anyway.
Sheriff: By the way, we still have an enormous overtime bill for my deputies pending with the city. When will that be paid?
Board: We’re out of money. They’re not getting paid. Now get to work.
Sheriff: Bite me.

Totally agree. He was a made man and now he’s pushing back against a weakening Garcetti and Sups. He will look good to the voters, too, and that’s what counts.

Good for him.
He’ll probably get re-elected.

Unless your mask in n95… it aint stopping shit.

It’s about the theatre of seeming to do something. It’s also about control; they have control of you and you will comply.

It is my understanding that if your n95 has a valve, it most likely doesn’t do anything to keep your germs in, just keep others out, and that only if properly fitted.