“The number of unemployed persons who were on temporary layoff decreased by 4.8 million in June to 10.6 million, following a decline of 2.7 million in May.” 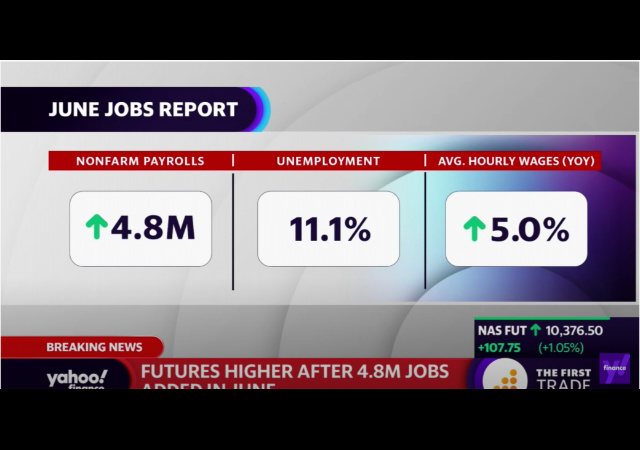 The U.S. economy is picking up after the coronavirus pandemic!

The June jobs report revealed the economy added 4.8 million jobs while the jobless rate fell to 11.1%

From the Labor Department:

Asians remained about the same at 13.8%.

The unemployed numbers continue to go down. It decreased by 4.8 million in June after a 2.8 million decline in May, but the number of permanent job losses continued to increase:

The number of unemployed persons who were jobless less than 5 weeks declined by 1.0 million to 2.8 million in June. Unemployed persons who were jobless 5 to 14 weeks numbered 11.5 million, down by 3.3 million over the month, and accounted for 65.2 percent of the unemployed. By contrast, the number of persons jobless 15 to 26 weeks and the long-term unemployed (those jobless for 27 weeks or more) saw over-the-month increases (+825,000 to 1.9 million and +227,000 to 1.4 million, respectively). (See table A-12.)

Those who want a job also declined:

The number of persons not in the labor force who currently want a job, at 8.2 million, declined by 767,000 in June but remained 3.2 million higher than in February. These individuals were not counted as unemployed because they were not actively looking for work during the last 4 weeks or were unavailable to take a job. (See table A-1.)

Persons marginally attached to the labor force–a subset of persons not in the labor
force who currently want a job–numbered 2.5 million in June, little different from the prior month. These individuals were not in the labor force, wanted and were available for work, and had looked for a job sometime in the prior 12 months but had not looked for work in the 4 weeks preceding the survey. Discouraged workers, a subset of the marginally attached who believed that no jobs were available for them, numbered 681,000 in June, essentially unchanged from the previous month.

Some negatives include a decrease in average hourly earnings for all employees. That went down 35 cents to $29.37.

I was wondering why all the frantic panic to get everybody locked in their basements again.

That’s absolutely right. Lots of talk here about how Austin has the HIGHEST INFECTION RATE in the whole country! Not a peep about the death rate.

Some doctors in Houston finally came out and called BS on all the hype. ICU occupancy is at 97% they screeched! Yeah, it ALWAYS runs around 95-97% the doctors said… you know we’re a business and that’s how we keep it profitable.

Also, have you noticed how they’ve started to talk about the new SWINE FLU? The Mu-Shu-Flu. Once everyone finally wises up to this Wu-Flu nonsense, they’ll start trying to panic us over the Mu-Shu-Flu.

It’s all about GET TRUMP. Nothing more, nothing less.

Think you will enjoy this.

During the Cultural Revolution in China doctors who stayed on the job to treat the huge number of sick and dying were attacked by Mao’s fanatical supporters. They were accused of “using work to suppress revolution”.

I suspect that as the economy picks up steam we will hear similar attacks here.

LOL, are you serious? He was losing when unemployment was 3.5%, now he’s super losing. His election was a complete statistical fluke, he’s acted like a chaotically insane moron for three and a half years, and you think he’s going to win.

Hillary and Dukakis were both ahead by more than 10 points on July 1 of their respective election year, yet they lost when it counted. And I doubt the current polls are any more accurate that they were in 2016.

Biden is benefiting by being a empty slate, where all of the different factions can project their own desired on to him. Once he selects a VP, and comes out of his basement, he’ll turn off a lot of voters.

Finally, the dems have picked the one candidate who is worse than Trump on major issues, like age, being a womanizer, being a white guy, etc., and they’ve abandoned major policy issues like law and order, optimism, and patriotism.

More good economic news. The headline unemployment numbers are jarring but when taken in context they are not so bad.

This is not a depression. Most of these job losses will be coming back. Service sector workers might have a different employer due to one restaurant closing and another entrepreneur buying the equipment etc.

Finally NAFTA was finally ended this week. USMCA went into effect on Wednesday. China and others can’t ship parts for assembly to Mexico/Canada using a back door loophole. That door has narrowed considerably with PDJT fighting for USMCA.

Workers benefit from this and from the temporary visa halt. Americans will be gaining jobs and wages will be rising.

And I expect they’re lying the numbers down. Anything to make Orange Man Bad look even badder.

They see a fearless Honey Badger ravaging and rooting out the deep state and they point their finger and cry out, “Orange Man bad.”

I hereby denounce all the people who have hired others, or who have been hired, thus contributing to these numbers. They are selfish racists, who put their own petty well-being ahead of the common interest in defeating Literally Hitler™. Couldn’t they exercise just a tiny bit of self-sacrifice, and wait until the second week of November before creating or taking a job? We need a recovery, but we need it in December, not now. President Superwoke (whoever she turns out to be) will need the boost; instead these selfish people waste it on that Hatemonger. (How we hate hate hate him.)

You are a white supremacist. We know this because your post contains multiple instances of the letters “w” and “p”, which stand for White Power. You also wrote the sword “Superwoke”, which contains the letter string “ok”, which is a White Power symbol. Nowhere in your post did you express enthusiastic support for Black Lives Matter, still more proof of your White Power worldview. Finally, there are exactly 616 characters in your post, and the number 616 is a Sacred Number in White Power numerology (the other is pi, because everyone knows mathematics is an insidious manifestation of White Power designed to keep the bruthas down).

And don’t bother denying any of this – if you were not guilty you would not stand accused.

Before everyone gets excited, it is best to go beyond the superficial edifice (and artifice) of the numbers.

Those numbers are bought and paid for by trillions of dollars in federal liabilities through the PPP.

Every year, beginning in May, gas prices go up and remain up until after Labor day. And every 4 years, just before the presidential election, the economy takes a dive.

The latter is early this year. So on to the powers that be. So over their shenanigans.

In my home state of Virginia, several people who were making more on unemployment tried to stay home and not go back to work. I’m surprised the Northam admin had the balls to tell them to go back to work.

Of course, him and his cronies have now passed legislation to push min wage to 12/hr, which is shameful for a state like this.

Yes, the economy is recovering.The question is still how much is it recovering? Now we are seeing another round of shutdowns for selected industries in various areas. How will this affect the recovery?