Our new non-profit, founded and organized by members of an up-and-coming generation of passionate Jewish activists, will counter ill-informed “efforts by anti-Zionists to separate Judaism and Zionism” 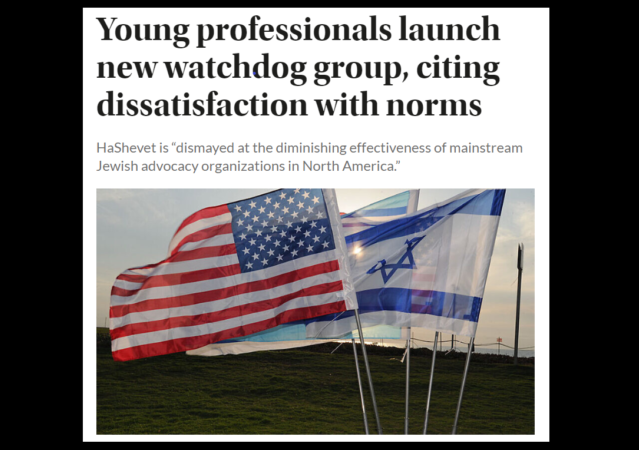 Against the backdrop of a rising tide of anti-Semitic incidents across the country and the failure of many mainstream Jewish organizations to condemn anti-Semitism emanating from the left, communities of color, or Islamists, I’ve joined a group of Jewish-American millennials in founding a brand-new non-profit organization called HaShevet.

It is my honor to serve on HaShevet’s founding board of directors with a cadre of brilliant, ambitious, and passionate Jewish leaders.

HaShevet is not a part of or affiliated with the Legal Insurrection Foundation.

[Our new logo, which derives its design from one of the meanings of the Hebrew word ‘hashevet’: ‘the stick’.]

On Monday, June 30, we published our first press release, announcing HaShevet’s launch and explaining our mission. JNS reported on our project:

Amid dissatisfaction with mainstream Jewish advocacy organizations, a new alliance of young Jewish American leaders was launched on Monday: HaShevet (Hebrew for “The Tribe,” which is also a nickname for the Jewish faith and people).

The organization seeks to “represent a diversity of political opinions and professional backgrounds” and “come together, united in our dedication to promote moral clarity within the Jewish advocacy sector, strengthen and mobilize young Jewish professionals to publicly oppose all forms of anti-Semitism (including anti-Zionism), and take up the mantle of Jewish community leadership to safeguard the future of the Jewish people,” said the organization in an announcement.

We believe so strongly in our mission that all of us on the founding board are volunteers, working on this project in our spare time:

In its statement, HaShevet said it is “driven by an unwavering imperative: the preservation, in safety and security, of the State of Israel and the Jewish Diaspora in North America. We are unabashed Zionists. Our Zionism is inspired by the courage and energy of the Jewish State and our unwavering belief in its legitimacy and enduring value to the world of nations.”

…HaShevet said it was formed out of being “dismayed at the diminishing effectiveness of mainstream Jewish advocacy organizations in North America,” as “strident and divisive fringe voices are taking advantage of a trend toward groupthink, hypocrisy, and virtue signaling within the mainstream establishment,” resulting in “Zionism is losing the culture war, as it increasingly becomes relegated to a narrow portion of the American political spectrum.”

The group also highlighted the rise in support for the Boycott, Divestment and Sanctions (BDS) movement on American university campuses, accusations of dual loyalties leveled at American Jews and the perpetuation of antisemitic and hateful content on social media website.
Similarly, the group also referenced the internal disputes within the American Jewish community, including the Conference of Presidents of Major Jewish Organizations, and between Jewish organizations, such as those on the political Left, including If Not Now, Jewish Voices for Peace, and J Street, and those on political Right, such as the Zionist Organization of America.

You can see HaShevet’s full press release here or below.

Today, HaShevet was quoted in another JNS piece; we have strongly criticized Anti-Defamation League CEO Jonathan Greenblatt for working with the Reverend Al Sharpton, who has a history of vicious anti-Jewish statements:

Bryan Leib, chairman of HaShevet, a new alliance of young Jewish American leaders that was formed amid dissatisfaction with mainstream Jewish advocacy organizations such as the ADL, echoed Klein as it pertains to Greenblatt and Sharpton, though questioned the Facebook boycott.

“We are committed to dialogue that unites communities rather than divides, like Reverend Al Sharpton has done for decades. It is hypocritical for the Anti-Defamation League’s head to work with someone who has long defamed Jews—and put on Congressional Record for references to ‘Bloodsucking Jews’ and ‘Jew Bastards’—without apologizing,” said Leib. “Surely, Mr. Greenblatt can find more a suitable partner in policing hate speech than someone whose rhetoric once fueled a targeted, lethal attack on Brooklyn’s Jewish community.”

Happily, responses to our fledgling enterprise have been overwhelmingly positive; my fellow board members have reported numerous inquiries from other Jewish young professionals from all over the country looking to get involved. Each of my fellow board members are equally excited—not least about the opportunity we’ve created to build strong relationships with each other. In an e-mail to me at LIF, Chairman Leib enthused, “I’m incredibly honored to serve as our organization’s first chairman. We have a smart, dedicated, and passionate board to advance our mission!” President and Vice Chair Nachman Mostofsky similarly expressed the importance of “working with young Jewish leaders from all walks of life and ideals, as long as they are founded in the precepts of Judaism.”

For my part, one of the best aspects about working on this project so far is the emphasis we’ve placed on preserving Jewish values—not only by defending those values within Jewish organizational circles, but also by consciously modeling them in our own lives. As the legendary Rabbi Hillel instructed, we are committed to loving our neighbors (and HaShevet colleagues) as ourselves, to performing acts of gemilut hasadim (‘loving kindness’ in Hebrew) for each other, and to beginning our tikkun olam (‘repairing the world’) work by working to improve ourselves.

I can’t wait to see where HaShevet takes us!

(For more information, check out HaShevet’s Facebook and Twitter accounts. And stay tuned; I’ll continue to write about HaShevet’s development and progress.)

at first glance, i read your nick as “rabbi wombat” and LOLd…

this goyim is firmly on your side.

A local news station is reporting that Kanye West has thrown his hat into the ring, announcing he is running for US President in the 2020 election.

I recognize that Jews are a staggering asset for all of humanity and wish all of you success success.

The pervasive and evil mythology-propaganda by which Arab jihadist belligerence against non-Muslims is rationalized/excused/enabled by Leftist dhimmis, while said dhimmis simultaneously vilify Jewish self-defense against jihad and the resurrection of a Jewish state which pre-dated the establishment of the supremacist and totalitarian ideology of “Submission” by several millennia, must be combated at every turn.

Good luck to you and your team, Samantha.

The best thing you can do if you are Jewish, is make Aliyah (immigrate to Israel). Israel needs you in Israel.

because someone needs to be the LRRPs for them?

and why concede territory to the enemy? an attack is the best form of defense.

or the IDF, for that matter.

ever read “Heights of Courage”?

LRRP? Do you know how small Israel is?

-The majority of those other organizations are corrupt & their voice was bought long ago in deals withe devil they will say whatever the puppet masters tell them to. Thank you for having the Courage to stand up to that. May Hashem Bless the Spirit & Purpose of your group & independent thought WorldWide

Good luck, but why didn’t you just call yourselves The Tribe? Much easier to remember and leaves no doubt as to purpose.

A worthy endeavor. I have found the rising Anti-Semitism to be very disturbing. I find the lack of any support against the leftists who spew their hateful rhetoric even though a large majority of Jewish people support the party known as Democrats appalling.

Why aren’t there a majority of the Jewish people making a big noise against this renewed trend we are seeing here and in Europe? Haven’t we seen this behavior before and known about the outcome of the pogroms which destroyed millions of lives, and is that not justification to be alarmed about it?

I don’t understand how our Country tolerates the words of hate that flow from the evil members of congress, particularly Ilhan, let alone encourage further like comments after all the lives lost in fighting the Nazis who grew their power through similar means. Never forget, yet the left apparently has, and openly encourage Islamic anti-Semitic hate to continue.

This work is noble and just. It is dangerous to ignore this growing trend, it needs to be stamped out, it should have no place in our society.

In some regards, even if all Jews joined in unison on the issue, would it curtail the antisemitism of Christians, Muslims and atheists? There are less that 15 million Jews worldwide.

That’s not to say that far too many Jews pretend they are immune, or justify and enable antisemitism. However, these other groups, which number in the billions, need to get themselves in check to have a transformation that eliminates the threat.

I wish you the best in your endeavors.

This is only “ill-informed” if Judaism and Zionism are synonyms. Which they are not. “Zionism” can reference a hill in Jerusalem, or it can refer to a movement founded in 1897, or perhaps it’s some arcane thing unknown to the goyem at large, including me. But “Judaism” is obviously a bit larger and older than any of these.

Now if, for modern political reasons, someone wants to make them synonyms, inseparable objects like, say, Great Britain and India (and we all know how well that worked out), or France and Algeria, or some such product of wishful thinking, then it’s not clear that contrary efforts are at all ill-informed.