Cain was in the hospital for a month. 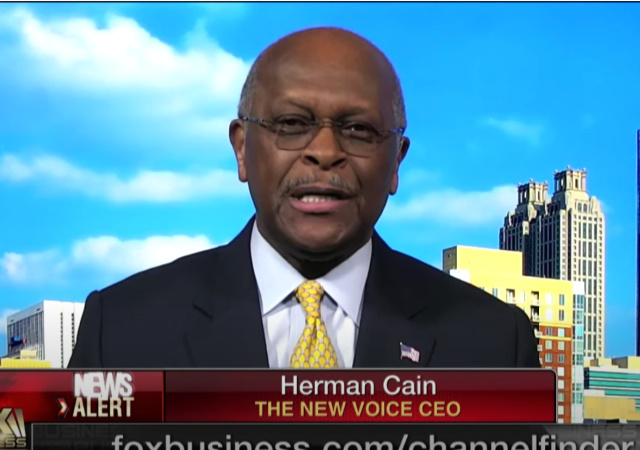 Former GOP presidential candidate Herman Cain died from the coronavirus at the age of 74.

Cain’s death was announced Thursday on his website by Dan Calabrese, who edits the site and had previously written about his colleague’s diagnosis.

“Herman Cain – our boss, our friend, like a father to so many of us – has passed away,” Calabrese said in the blog post.

Cain was among the highest-profile public figures in the United States to have died from Covid-19. A 74-year-old survivor of stage 4 colon cancer, Cain had been a business executive and the board chairman of a branch of Kansas City’s Federal Reserve Bank before moving into Republican politics and eventually becoming a presidential candidate.

Last year, Trump briefly considered picking Cain as his nominee to join the Federal Reserve Board. Cain remained a vocal supporter of Trump’s after his nomination was withdrawn, and he attended the president’s controversial reelection rally in Oklahoma in June, shortly before being diagnosed with the coronavirus.

Cain launched a presidential campaign in 2012. He suspended his campaign after he faced accusations of sexual harassment, but always denied the allegations.

Cain grew up poor and worked hard for everything he earned:

A stellar student who worked hard, Cain graduated from Morehouse College with a mathematics degree in 1967. A year later, he married Gloria Etchison, who he had met when he was a sophomore at Morehouse and she a freshman at Morris Brown College.

Cain went on to earn a master’s in computer science from Purdue University in 1971, and helped develop fire control ballistics for ships and fighter planes for the U.S. Navy.

Next, he joined the Coca-Cola Co. as a systems analyst, and after considerable success, moved to the Pillsbury Co.

After serving as regional vice president of Pillsbury’s Burger King, Cain then took on the biggest challenge of his career as president and CEO of Godfather’s Pizza, a national chain teetering on the edge of bankruptcy.

In 14 months, he returned Godfather’s to profitability and led his management team to a buyout of the company.

The world is less for his passing

notamemberofanyorganizedpolicital in reply to 2smartforlibs. | July 30, 2020 at 1:06 pm

I read he had been battling a cancer.

Cancer never kills anyone does it?

HImmanuelson in reply to notamemberofanyorganizedpolicital. | July 30, 2020 at 2:20 pm

LOL, no, not in this case. That report was from 14 years ago and he was declared cancer free 11 years ago.

Milhouse in reply to notamemberofanyorganizedpolicital. | August 2, 2020 at 3:11 am

Look it up, you idiot. It’s not exactly secret.

We have lost a good and decent man.
RIP

Good and decent, an outspoken Conservative and patriot. Exactly the sort of man that we need right now.

Got it by attending the Trump rally will be the meme…

I’m sure the concern and grief by those sharing this “info” will be obvious.

The news is reporting that he was hospitalized for it 2 weeks after attending the Trump rally so it’s quite likely that he did pick it up there.

He was a fine man, I’m really sorry to see that he is gone.

That seems to be a favourite dream of the death cult believing liberal left ??

Although funny how no one has died while attending any or the many Democrat rallies in cities like Portland, Chicago or Seattle isn’t it??

He was flying all over the country, meeting all kinds of people. He could have got it at any of those events. There’s no reason to single out this one.

Herman was the keynote speaker at a fundraising dinner for a convention I planned and executed in 2011, when he was running for President. A real class act and the only presidential candidate to accept an invitation to a Tea Party event in a swing state (Ohio). We had about 300 at the dinner and about 600 at the convention. He will be missed.

Of his cancer diagnosis, I remember Herman’s telling of the story:

His doctor had just broken the news that his cancer was advanced and that there was nothing that could be done, that he was going to die.

There was a brief silence and the doctor asked, “What do you think?”

Mr. Cain replied, “I think I’m going to get a new doctor.”

Years ago, my dad was in Florida for a conference. It was Saturday, Nebraska GameDay. He was sitting at the hotel bar in Husker gear by himself. Herman Cain walks by, sees my dad, and pulls up a chair. They watch the game together, share some drinks and food, and Cain insists on picking up the whole tab. He was a normal guy, just wanting to watch his Huskers play with another fan. RIP.

RIP Herman Cain – He was a proud Graduate of Purdue and was very supportive of the Boilermakers.

The best Man at my wedding [many years ago] passed away from Stage 4 Colon cancer this June. His death was listed as Covid. My neighbor who is a nurse, told me the family cannot get the death certificate changed.

Interesting that Herman Cain was a survivor of Stage 4 Colon cancer.

I voted for him.

He’s the first black president we should have had.

Herman Cain was a descent and honorable man. He was a gentleman in very sense of the word, a role model to all young black men. His loss is a far bigger than that of John Lewis but unfortunately he will not receive the accolades as he was a Republican.

With due respect and courtesy to his family, John Lewis heroically walked across a bridge and thereby closed a wide, interracial chasm.

By contrast, Herman Cain bridged seemingly irreconcilable sides in a way that harmonized their untuned chords to chime in unison.

Both men were great, but only one thought and acted always and only for the better welfare of the whole, rather than his own group, and that was Herman Cain.

Herman Cain, sprung from the great idea of E Pluribus Unum, was, therefore, the larger American of the two.

I don’t believe a single thing Lewis ever said.

He was the OAC of his day.

Sad news — I’m sorry to hear of this.

dang. this is sad.

Herman was recovering from stage 4 colon cancer. Any flu would have done him in.

He was declared cancer free 11 years ago, LOL. You have a funny definition of recovery.

Herman took his brand of grit to a higher, more human level.

Read that as: Why talk about race when that simply doesn’t matter? Anyway, we’re all pink on the inside; and as Americans, we need to talk more about, and, more importantly, do more, based on our commonalities, not our differences.

I’ll miss his unique voice, his fertile mind and kindly charm. He was a class act without equal. Too bad for us, we weren’t perceptive, substantive, and, group-wise, unselfish enough in our quests to elect him our president.

You’re with the Great Geometer now, HC; may you always RIP.

I mourn the passing of Herman Cain. He was very intelligent and did not focus upon race to the exclusion of all other aspect of human life.

Deeply saddened by the passing of someone who, by most accounts, was a fine human being. May God comfort his family in this time of mourning.

We need a Herman Cain now in the worst way!
.