As the U.S. pushes extending an arms embargo against Iran, explosions at two sensitive sites remind us of how ineffective the nuclear deal was. 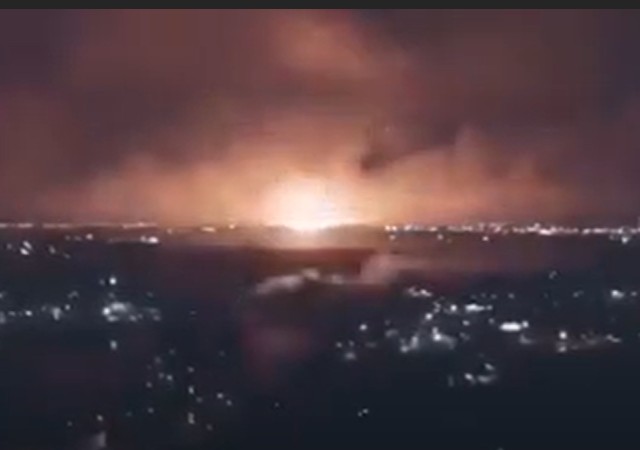 During the past week, there have been two explosions that highlight the regime’s illicit weapons programs.

The most recent blast damaged part of the Natanz complex, where Iran enriches uranium.

The early evidence strongly suggested on Thursday the damage was in fact sabotage, though the possibility remained that it was the result of an industrial accident. …

The Persian language service of the BBC reported that several members of its staff received an email from a previously unknown group that referred to itself as the Homeland Cheetahs several hours before the fire broke out, saying there would be an attack at Natanz around 2 a.m. The group claimed responsibility and said it was composed of dissidents in Iran’s military and security apparatus. They said the attack would target above-ground sections of the targeted facilities so that the Iranian government could not cover up the damage.

The Times noted that it isn’t clear if the Homeland Cheetahs is a real group, and if it is, if its domestic or foreign in origin. But the report cited an unidentified “Middle Eastern intelligence official,” who said that the blast was caused by a bomb. A photograph released by the Atomic Energy Organization of Iran (AEOI) — the Times called it “Atomic Energy Agency of Iran” — “showing what seemed to be destruction from a major explosion that ripped doors from their hinges and caused the roof to collapse.”

Previously, a huge explosion lit up the night sky overnight Thursday (early Friday) last week in Tehran. No cause has been identified with certainty, but it is believed to be related to Iran’s illicit conventional and nuclear weapons programs that have recently come under increased scrutiny.

The video of the huge blast raises questions as to the source of the explosion. The official Iranian explanation is that the blast was the result of a gas tank exploding.

First video report of a massive explosion with red light around Tehran, heard by many residents. Reports of a military outpost around there. #Iran pic.twitter.com/lQT4CPFLUC

A report at Radio Farda questions the Iranian identification of Parchin — a military base where Iran has carried out nuclear weapons research and which it has refused to allow the International Atomic Energy Agency (IAEA) access to inspect — as the location of the blast. The report observed “a closer examination of videos posted on social media seemed to suggest that the blast took place in the Khojir region of Tehran, something finally confirmed by satellite pictures a day later,” not Parchin.

Khojir is not as well-known as Parchin, and it is reported to be the site of Iranian ballistic missile research. The Radio Farda report speculates that Iran’s “reluctance” to mention Khojir is due to “operational secrecy,” as “Iranian officials have barely acknowledged Khojir.” The Radio Farda report also notes that the evidence on the ground suggests that what exploded was related to one of Iran’s “solid propellant production sites.”

The Radio Farda report acknowledged that it may be impossible for outsiders to determine if the explosion was an accident or due to sabotage.

An Israeli website, IntelliTimes, identified the blast as occurring at Hemmat Missile Industries Factory, which is responsible for Iran’s production of precision-guided missiles (PGM).

#BREAKING : We Can Confirm By Satellite that the blast in eastern Tehran occurred in a complex in #khojir that belonging to Hemmat Missile Industries Factory of Iran's AIO that her Ext' Unit also responsible for establishing SSM Precision Missile Factories in #Syria and Lebanon pic.twitter.com/HQ6Ou28alH

There has been related speculation that the blast was caused by Israel — Iran’s PGM are thought to be a major threat to Israel — possibly by cyber sabotage.

Reports: Explosion in Iran’s eastern mountains was caused by a cyber attack that turned the facility on itself, destroying Iran's Shahab long-range missile force stored in the Khajir tunnel base complex as well as the solid fuel production facility. pic.twitter.com/WBo88jRduJ

If I didn’t know any better, I’d say Israel just attacked the PGM threat at its source. https://t.co/iQymvjU9Bz

In addition to the nuclear and missile facilities, there have been other destructive fires and blasts this week in Iran including one at or near the Sina hospital in northern Tehran, attributed to a gas leak, and another in Shiraz.

The explosions at Khojir and Natanz come at a time when Iran is under increased scrutiny for its illicit ballistic missile and nuclear weapons research. In addition, the United States is pushing for the rest of the world to extend an arms embargo — forbidding Tehran from selling or purchasing weapons to or from other nations. The embargo is to be lifted in October as part of the 2015 nuclear deal. (Iran is suspected by the United Nations of violating the deal and sending ballistic missiles to the Houthi rebels in Yemen.)

Secretary of State Mike Pompeo was very clear about the consequences of lifting the arms embargo, “If Iran is allowed to buy weapons from the likes of China and Russia, more civilians in the Middle East will die at the hands of the regime and its proxies. It’s that straightforward. Tehran will become an arms dealer for the Maduros and Assads of the world. Sworn enemies of Israel like Hamas and Hizballah will be better armed. European nations will be put at risk.”

In remarks to the Security Council this week, Pompeo continued his campaign of exposing Iran’s violations of the nuclear deal:

While still claiming to remain in the deal, Iran, by its own admission, and as confirmed by the IAEA, is showing no signs of slowing its destabilizing nuclear escalation.

Iran is also accumulating dangerous knowledge. For example, late last year Iran announced that its scientists were working on a new centrifuge – the IR-9 – that would allow Tehran to enrich uranium up to 50 times faster than the IR-1 centrifuges allowed under the JCPOA.

Even as Iran pursues research that could threaten its breakout time to a nuclear weapon, it’s also denied IAEA inspections access to locations Iran is obligated to provide.

This council cannot simply hope that Iran acts in good faith, given its indisputable fact pattern.

At the Muslim training academy,

This one made it through the academy, but when showing off his new skills,

They are dumb POS, glad to see that one receive justice.

Won’t show the video unless I sign up for google.

From the guys that shot down their own passenger plane to show us they aren’t messing around this time.

The Obama legacy in China and Iran, too.

Obama’s legacy is treason on a scale unheard of in world history. The credit really goes to Soros, who should get Satan’s highest honor.

Soro’s evil accomplishment just might rival Hitler’s and Stalins’, because if America is destroyed as we know it, the world will see genocide on a scale never see in world history.

For those of a certain age, wisdom from Shelly Berman….

The pallets of cash that obama sent to iran were not all used to fund the iranian program of terror, some was used to help pay for the development of a nuclear weapon.

Sustainable development through stretching and diversifying redistributive change… greenbacks. How green are the advocates NOW for social justice adventures, denial of counterclaims, and support for transnational terrorism.

And a portion went to the Taliban, found out by US intelligence. To cover up the Obama cash, CIA operatives and the NYT fabricated a story that the money was Putin’s for bounty on US Servicemen.

whether we do anything about it or not, the israelis will never allow tehran to acquire/deploy nuclear weapons–never

Mossad has been busy.

It was nice of the Israelis to conduct a fireworks display for us on the Fourth….Bibi is a class guy! 🙂