Doing this once could be considered a mistake. Maybe. But this is the second time this has happened recently on Meet the Press, and it’s something that shouldn’t be forgiven even in the event Todd issues another apology. 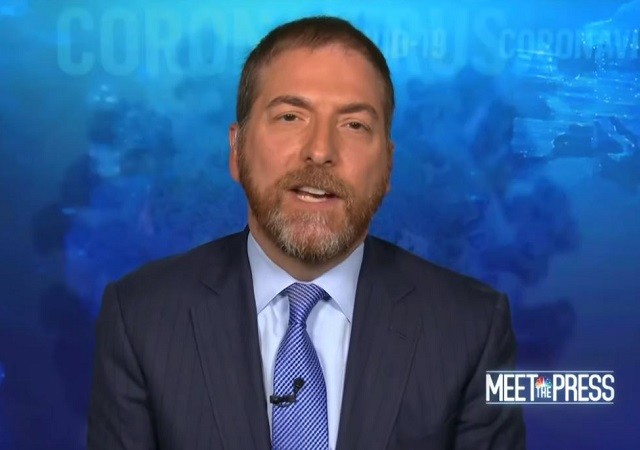 Last week, several mainstream media journalists ran with an out-of-context quote from White House press secretary Kayleigh McEnany. At first glance, it made it look like she was saying President Trump was willing to ignore science to get kids to return to public school classrooms in the fall.

To quickly recap, here’s an example courtesy of CNN’s Jim Acosta of what many reporters posted to their Twitter feeds shortly after the Thursday press briefing:

The White House Press Secretary on Trump's push to reopen schools: "The science should not stand in the way of this."

McEnany’s full quote, which you can read here, was two paragraphs long. The essence of what she said was that the science is on the side of those like Trump, who wanted to reopen schools with in-person attendance fully. Even Acosta’s colleague Jake Tapper, another reporter who is prone to displaying liberal bias, stepped in to correct all of the false reports about what McEnany said.

As of this writing, though, Acosta and the other reporters who misreported the quote left their tweets up. Acosta’s has nearly 50,000 RTs to date.

Fast forward three days to Sunday. Meet the Press anchor Chuck Todd hosted a special edition of his show titled “The COVID Crisis,” which was little more than a 45-minute “bash Trump’s handling of the Wuhan Coronavirus outbreak along with the red state Republican governors who support him” program.

During the first seven minutes of the broadcast, the shortened clip of McEnany’s comments about how science “should not stand in the way of this” ran twice. First at the 1:08 mark and then at the 6:10 mark, as you can see below (I’ve set the video to start at the first instance of it being shown):

In both cases where they played remarks, Todd gave no context. He used the deceptively shortened quote to lend credence to a claim Todd made at the opening about how Trump was allegedly “continuing to deny the reality on the ground” about the Wuhan Coronavirus. Except for the reality of it was that McEnany said more than what Todd included in the video montages shown at the start of Meet the Press.

George Washington University law school professor Jonathan Turley called out Todd’s deceptive use of McEnany’s quote in a post published at his website, as well as in a Twitter thread Sunday morning not long after the episode aired:

…Todd is fully aware that the McEnany said the exact opposite of what his edited clip suggests. The quote was McEnany referring to a scientific study and, right after the line quoted, she said “The science is very clear on this” and later added, “The science is on our side here.”

…Todd played this clip and then immediately interviewed Dr. Francis Collins on whether the public can trust the “watered down” and manipulated facts offered by the White House.That would be far more compelling as a criticism if you did not just play a knowingly misleading clip.

This clip is days old so NBC was fully aware that it created a false image of McEnany’s statement. Yet, it was decided not to let the actual facts stand in the way of a false narrative. Todd took a statement on a scientific study and made it sound like a dismissal of all science.

…Many disagree with the White House, but they still want to receive an accurate account of what is being said and done in Washington. Instead, they are given news tailored to fit a narrative. There comes a point where you are no longer informing but indoctrinating the public.

“There comes a point where you are no longer informing but indoctrinating the public.” Sadly, American journalism hit that point a long time ago.

There is an irony of Todd using the edited quote to prove his biased point about Trump supposedly living in an alternative reality. Last Wednesday, he claimed on live TV with a straight face that “there is no editorial view here on any of these newscasts on MSNBC in the daytime.” He said this just seconds after MSNBC anchor Katy Tur editorialized for a good 60 seconds after a heated back and forth with Trump campaign communications director Tim Murtaugh:

After @KatyTurNBC editorializes about why BlackLivesMatter marches are OK but not Trump rallies, MSNBC’s @chucktodd bizarrely claims “there’s no editorial point of view here on any of these newscasts on MSNBC in the daytime” pic.twitter.com/7bKuMhHweJ

Some people on Twitter took it as a veiled scolding of Tur, suggesting Todd’s disclaimer was an example of him showing a commitment to objective journalism. In reality, the only thing Todd was upset about was the fact that Tur was so open with her display of bias and made no attempt to hide it, as Todd often tries and fails to do himself on his Sunday shows.

Case in point: Two months ago, Todd was caught doing the exact same thing he did with the McEnany clip. Except in the May example, it was a shortened clip of comments made by Attorney General Bill Barr during an interview he did with CBS News’s Catherine Herridge.

Two days later, Todd apologized and stated that he and the Meet the Press staff should have checked the transcript instead of relying on two shortened clips, which he claimed were the only ones he’d seen of the Barr interview.

I didn’t give Todd the benefit of the doubt then, and I’m certainly not giving it to him now. There comes the point when you begin to understand that these are not merely innocent mistakes, especially when you consider staffers, and the anchors themselves have access to the full videos and transcripts for just about every public figure they quote.

Doing something like this once could maybe be considered a mistake. Maybe. But doing it a second time and so soon after the first constitutes a pattern, and it’s something that shouldn’t be forgiven even in the event Todd issues another apology.

NBC leads all other networks in cleverly crafted edited videos

How convenient for DEMS…………

What do they care? They suffer no consequences. Certainly no media peer pressure to clean up their act — to other media, this is admirable, exactly what they should be doing; the collective agenda is to destroy Trump. Traditional ethical journalism means nothing next to bagging Trump. Trump and his people exert absolutely no pressure or punishment (if you think the 10,000th Trump tweet on “fake media” or the 175th headline about how Trump’s press secretary “owned” Acosta make a difference, think again). Trump continually, gladly submits to interviews from their hacks and liars.

Until there is real change in how we deal with the media, meaning real pain to the media, expect this to go on and on.

I have not watched NBC for years now, and I consider ABC and CNN to be almost as bad.

“Misleading” is a very generous way to put it. They are downright, intentionally lying.

And little Chuckles should be treated like every other child who lies; spanked and sent to bed without dinner.

US media has completely discredited themselves. The same is true for most of Europe.

Trying to figure out if UpChuck is more like a douche-y hack, or a hack-y douche.

F CHUCK In full disclosure how my was your wife paid by the Sanders campaign this cycle? It was millions last time while you gave crazy Bernie softball interviews. A bit of Advise F Chuck. Don’t let your mouth write check out backside can’t cash.

Chuck Todd’s wife, Kristian, is co-founder of Maverick Strategies, an agency that services progressive candidates and causes. When the left has more money to spend, the Todd Family’s lifestyle improves.

On the other hand Todd usually apologize and owns up to his mistakes.

When the mistakes all skew against one ‘side’ though, it demonstrates bias. Maybe Todd should consider bringing all his media colleagues to a political and policy bias training session. Not that any of them would admit bias…they are all objective, fact based reporters in their own eyes.

“Once is happenstance. Twice is coincidence. Three times is enemy action.” – Ian Fleming

Fifty times a day is the US media, at their best.

notamemberofanyorganizedpolicital in reply to georgfelis. | July 20, 2020 at 1:05 pm

Having someone as biased and dishonest at Chuck Todd as its political director, who can NBC expect to have any credibility, not that it cares?

Church Todd is not a journalist. His actions are that of political opposition.

Todd is not a journalist (or even a college grad). He was a Democratic congressional staffer prior to joining NBC.

Does Mr. Toddler have any shame? No. None at all.

He’s a street rioter in waiting.

FChuck is too much of a p*ssy to ever be a real street rioter. Unless he’s the kind that hits people from behind and then runs away. Kind of like he does in his “regular” job.

Catch Chuckles in a lie, he just repeats it and turns up the volume. What a scumsucking toad.

NBC is notorious for falsely editing recordings. Again and again.

Tim Russert’s spirit was imagined recently to have expressed the following:

“Todd,” he chimed, “stop these continued tricks, not in the service of of journalism, the American people, and the nation, but partisan, political advocacy.

“They are shameful, and frankly, I’m embarrassed by your conduct. Meet the Press, for example, used to mean far more to, and positively energize, even lead in the political arena than any of these little acts of mischief you repeatedly commit, and always prior to your perfunctory, programmed, remorse-attempting apologizing. Nobody believes them, Todd, for the simple reason, they aren’t facially genuine.

“Stop the gimmicking, Todd, or excuse yourself from anchoring — whether it’s Meet the Press or anything else at NBC. Being an anchor or host on a political special requires committed journalism at its best. Your level of achievement doesn’t come close, my friend. Please, then, give it a rest.”

Regarding your headline, the clip was not merely “deceptively” edited. It was “deceitfully” edited.

Mr. Toddler should read this:

The Power of Healthy Shame: How Shame Can Be Our Friend:

“Sociopaths and pathological liars are people who feel no shame….healthy shame that informs us when we’re violating another’s boundaries and dignity can help us become more sensitized to how we’re affecting others.”

Toddler is a sociopath, pathological – or both?

In either event, he’s paid to betray our country.

notamemberofanyorganizedpolicital in reply to TheFineReport.com. | July 20, 2020 at 3:08 pm

IMO there are no sociopaths, they are all Psychopaths.

Sociopath is simply the lie psychopaths tell when they are caught.

The last time I watched meet the press the first five minutes was like watching a sleazy campaign ad, it was cartoonish.

The plan of the enemies of liberty: 1. disinformation, 2. demoralization, 3. destabilization, and 4. destruction. We are somewhere between 3 and 4.

Chuck Todd and Jim Acosta are like bull dung and moose dung. Different flavors of the same thing – dung.

The most punchable face, by far.

NBC literally blew its credibility all to hell when they rigged Chevy trucks to explode for its weekly Dateline disaster show back in November 1992 and subsequently had to settle a lawsuit with GM over misleading practices! That certainly didn’t seem to stop them though, did it?