China Sends Its First Domestically Built Icebreaker to the Arctic, Moves to Procure Gold Mine in Region

China Sends Its First Domestically Built Icebreaker to the Arctic, Moves to Procure Gold Mine in Region 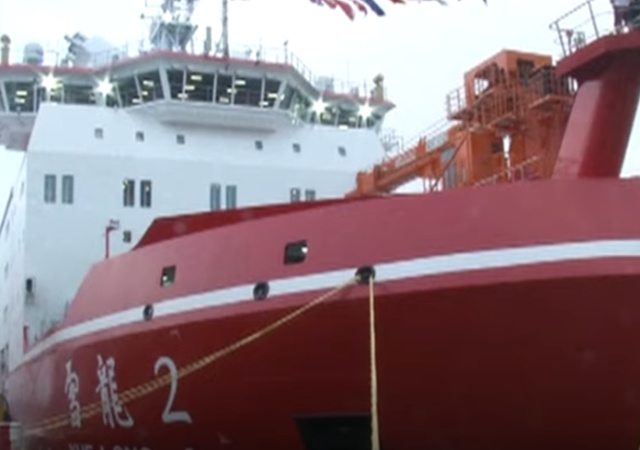 About a month ago, while our nation focused on BLM-drama and COVID-panic, President Donald Trump’s order for new ships and resources for a push into the Arctic went under the radar.

Trump issued a memorandum on “safeguarding US national interests in the Arctic and Antarctic regions” which calls on the administration to come up with a plan within 60 days that would include at least three heavy icebreakers to be built by 2029, and recommendations for locations to build two support bases in the US and two on foreign soil.

The memorandum appeared designed to expand and inject extra urgency into a longstanding US Coast Guard plan to build three heavy and three medium icebreakers. It suggests the US look into leasing arrangements while the new fleet is being built.

“This appears to be another rapid study to confirm or perhaps expand what the US needs,” said Heather Conley, senior vice-president for Europe, Eurasia and the Arctic at the Centre for Strategic and International Studies. “Again, how to pay for it is another question that will need to be answered another day.”

The US currently has just one heavy icebreaker, the ageing Polar Star, and one medium. Russia currently has 40 breakers in total, Finland has seven, and Canada and Sweden have six each.

And while our relationship with Russia has its challenges, it is evident with the recent consulate closures, China’s interest in the Arctic has become a concern to our policymakers. In fact, China’s first domestically built icebreaker is on its way to the Arctic.

Xuelong 2, or Snow Dragon 2, left Shanghai on July 15 for a scientific expedition to the Arctic and is expected to return in late September. Scientists aboard the ship plan to research Arctic biodiversity and ecosystems to improve China’s understanding of climate change in the Arctic, according to state media.

The Xuelong, which China bought in the 1990s, has already traveled to the Arctic. While Xuelong 2’s trip isn’t a first for Beijing, it adds credibility to China’s polar ambitions, according to Dr. Elizabeth Buchanan, a lecturer at Deakin University in Australia.

Meanwhile, China made a move to procure a gold mine in the region, which has concerned many Canadian officials to block the intended purchase.

The purchase of a gold mine in the Canadian Arctic by a state-run Chinese company is triggering alarms in Canada over China’s expanding presence in a region that is growing in strategic importance for its shipping lanes and resources.

Mr. Trudeau’s cabinet has final say over the deal, but members of the Liberal Party government have stayed silent about it while it remains under review.

In a related subject, Trump’s quest to purchase Greenland has not progressed much beyond opening up a consulate in the autonomous Danish territory. Secretary of State Mike Pompeo has just visited Denmark, meeting his Danish counterpart Jeppe Kofod and the country’s prime minister, Mette Frederiksen, as well as foreign affairs representatives for Greenland and the Faroe Islands, also a Danish autonomous territory.

In Kofod’s words, Denmark considers the US its “absolutely closest ally” and has contributed troops to NATO missions in Afghanistan, Iraq and Libya.

…Leading up to the visit a statement from the US Department of State highlighted the importance of a partnership in the Arctic, “particularly as we see increased activity in the region from Russia and the People’s Republic of China”.

Our Ambassador to Denmark, Carl Sands, provided some details on the free market wooing of Greenlanders and contrasted both the Chinese and Russian approaches to the region.

The U.S. private sector is looking to expand commercial ties with Greenlandic businesses like Royal Arctic Lines, KNI, and Air Greenland. We are also working with partners in Maine and Alaska to increase trade in goods and services between the United States and Greenland, as well as investment.

U.S. diplomacy in Greenland is committed to pluralism just as American society is at home, and seeks to respect the aspirations and cultural heritage of Greenlanders. American diplomacy is vastly different from the political and ideological submission demanded by authoritarian regimes in Russia and China.

The situation is “developing,” and we will keep you updated.

Ice Dragon is a cool name.

It would be a shame if that icebreaker were to suffer some sort of mishap, and sink.

That will probably happen without help, it is a cheap Chinese knockoff.

The last thing we need is a Chinese military base in the Arctic, and that’s what this “gold mine” would be, regardless of whatever else is happening there.

I think the idea of buying Greenland is kinda cool, but I’ll believe it when I see it.

Wouldn’t it be near NORAD’s (or whatever is running them today) northward looking ABM radars?

Who did they steal the blueprints from?

China Stole At Least $1 Billion In Trade Secrets & Research From US: State Dept

alaskabob in reply to notamemberofanyorganizedpolicital. | July 27, 2020 at 2:45 pm

Russia. The Arctic could become a “lake” for both Russian and Chinese ships. Hum….gee with “global warming” guess who isn’t betting the bank on that?

The Friendly Grizzly in reply to notamemberofanyorganizedpolicital. | July 27, 2020 at 8:16 pm

I’m hoping from the same people who designed the littoral ships, or the Gerald Ford. That’ll teach them!

Did everyone forget that all that ice will soon be melted and the small portion of dry land remaining will be littered with polar bear carcasses. I saw that on the internet.

Those ice breakers will be obsolete.

“The US currently has just one heavy icebreaker, the ageing Polar Star, and one medium.”

The Polar Sea, the Polar Star’s sister ship, is mothballed in Seattle, and the USCG operates nine icebreaking cutters on the Great Lakes (only one is consider to be a heavy icebreaker, although not heavy with respect to polar conditions.

During 8 years of the disease known as ‘obama’, the US fell behind in EVERYTHING.

Obama was – and remains – a traitor.

notamemberofanyorganizedpolicital in reply to TheFineReport.com. | July 28, 2020 at 1:00 am

But not to the boy coddling muslims…….

Yeah, the Obama administration did make many mistakes of commission and omission resulting in a less favorable strategic map and less capable military.

In fairness, blaming the lack of icebreaker capable vessels on Obama is not correct. The class was put in service in 1976. That’s 45 years and seven Presidents ago. Though PDJT did ask for funding in the 2017 defense bill for additional capacity.

IMO, this is one of the nice to have capabilities that get deferred until it’s critical to have. Simple cost/benefit budget mechanics were at play not some scheme to prevent the build out. These are CG vessels. CG gets routinely short changed, this intensified as Iraq and Afghanistan drew resources.

“Is the Coast Guard’s new Heavy Icebreaker Program in trouble?”

I’m a weird guy. I appreciate ice breakers. They are vital for our national security. And I’m probably the only man in Texas who appreciates this. Maybe because I’ve hunted a lot in Alaska, where the ocean freezes (north coast; the Black Current or Kuroshio keeps Anchorage ice free). Or cruised the waters around the Aleutians.

Well, maybe my Ted Cruz does.

You know what would look really nice on that ship? Guns.

You mean like the “Winds” class of USCG icebreakers? All four (North, South, East and Westwind) launched with 2 5″-38 caliber guns in a forward twin turret, plus AA and depth charge armament. Seems that WW II had something to do with the armament.

No. I meant the Polar class.

Good on you for bringing up the Winds class. You’re a good egg.

I have to laugh.