The disagreement smacks of China’s aggressive approach to dominate the region by any means necessary. 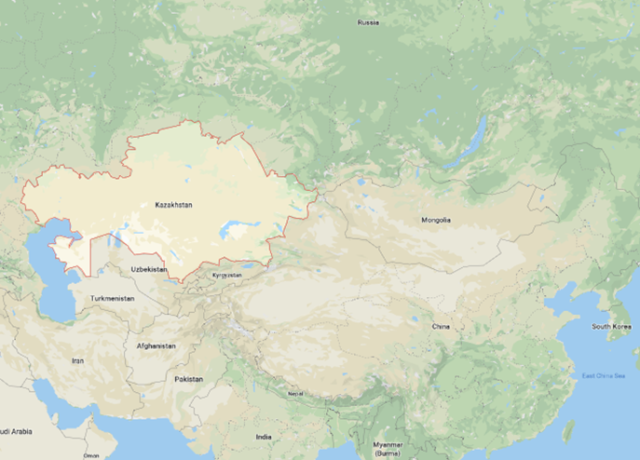 Several days ago, news broke that a new virus hitting the Central Asian nation of Kazakhstan was worse than the Wuhan Coronavirus.

An “unknown pneumonia” that is “much deadlier” than COVID-19 has killed scores of people in Kazakhstan, according to an ominous warning from the Chinese embassy in the country. In a statement to its citizens who live in Kazakhstan, the embassy claimed the mysterious disease has killed 1,772 people this year—including Chinese citizens—and 628 of those deaths took place in June.

The claims have not been verified by the Kazakh government, according to CNN. “Kazakhstani Health Department and other agencies are conducting comparative research and have not defined the nature of the pneumonia virus,” the embassy statement said, adding: “This disease is much deadlier than COVID-19.” A Kazakh news agency reportedly cited government data showing that hundreds of people are being hospitalized with the unknown disease every day.

Kazakhstan’s health ministry officially dismissed the Chinese government’s warning of a strange pneumonia, saying the information given by the Chinese embassy was “incorrect”.

The health ministry did say, however, that the pneumonia cases in the country all showed clinical symptoms of abnormalities. So, something is awry with this pneumonia, whatever that may mean.

George Gao Fu, director of Chinese Center for Disease Control and Prevention, was quoted by the China New Service today saying the Chinese authorities were still investigating it.

Aizhan Esmagambetova, chief sanitary doctor for Kazakhstan, was quoted in Informburo — a state run news portal — saying the death toll from pneumonia this year was 50% higher than it was last year.

Furthermore, a top official at the World Health Organization asserts that the pneumonia outbreak in Kazakhstan is likely to be the novel coronavirus.

The executive director of the WHO’s Health Emergencies Program, Michael Ryan, said in an online briefing from Geneva that he.thinks the cases “just have not been diagnosed correctly.”

The upward trajectory of COVID-19 in the country would support this, Ryan added.

On Thursday, the Chinese embassy in Kazakhstan warned its citizens of a deadly unidentified strain of pneumonia, after a “significant” rise in cases in June.

Initially, the statement released through its social media WeChat channel referred to “Kazakhstan pneumonia,” before changing the wording to “non-COVID pneumonia.”

Why would China promote the idea of a deadly, new disease breaking out in a country with which it shares its border? Perhaps it is China’s attempt to continue the pandemic panic within the U.S. and other countries that are economic competitors.

Additionally, a look at recent Kazakhstan-China relations reveals some strain between the two countries. Paired with China’s recent moves along the Indian border, it appears like it is attempting to aggressively extend its regional influence.

For example, in April of this year, Kazakhstan summoned the Chinese ambassador in protest over an article that asserted the Central Asian nation wanted to actually become part of China.

Kazakhstan’s foreign ministry summoned the Chinese ambassador on Tuesday to protest over an article saying the country was keen to become part of China, the ministry said.

In a statement the Kazakh ministry said the article titled “Why Kazakhstan is eager to return to China” and published on privately-owned Chinese website sohu.com “runs counter to the spirit of permanent comprehensive strategic partnership” officially declared between the two countries.

The ambassadorial summons is an unusual move since the neighbouring countries usually avoid criticising each other.

The article does not reflect the position of China’s government, and the two countries’ friendship shall not be shaken by any matter, said China’s foreign ministry in a statement sent to Reuters.

The article retells in brief the history of Kazakhstan, noting that leaders of many Kazakh tribes had pledged allegiance to the Chinese emperor.

While it is difficult to believe WHO officials without proof, it is easy to believe that this disagreement over the virus smacks of China’s aggressive approach to dominate the region by any means necessary.

“The article does not reflect the position of China’s government, and the two countries’ friendship shall not be shaken by any matter, said China’s foreign ministry in a statement sent to Reuters.”

I don’t believe that for a nanosecond: that article was a trial balloon to see how strong a reaction it would provoke.

DHS has better have our borders shut tight, not a single person allowed in to our nation. Protect us, DHS, do your jobs.

I don’t usually get my news from the Chinese Communist Party, but when I do, I always assume it is the exact opposite if the truth. It is a deceptive defensive deflection and intentional defensive subterfuge by the CCP to hide its colossal fiasco of mismanagement of COVID-19. The CCP naming of the “Kazakhstan Pneumonia” is transparently cynical, given their claim that the terms “China flu“ and “Wuhan flu” are racist. And the fact that China is reporting it strains credulity, when they never actually reported Covid to the WHO.

They share a border. Identify the Kazakhstan issue as COVID19 would suggest 2 things: more evidence of viral cases originating from China, China losing control of the infection in their own provinces and shaking the faith of its people.

Reading this and about Hong Kong remind me of how crappy neighbors caused everyone who could move to get the hell out of the city. CCP is much like our inner city trash, both CCP and our ghetto dwellers turn nice places and stuff into crap.

No one wants to live anywhere near them.

All CCP is (or any communist party) is just organized crime under the auspices of “government”
Prove me wrong.

China has to pay in some major way, something that hits so hard they will never release murder viruses again

I dunno, gonz. Commie Sue, or the CCP, doesn’t take kindly to upbraids, constructive criticism, negative agency findings, and especially new, open and fully transparent trade deals by which she, or they, must pay new duties, can’t steal intellectual property or spy on us surreptitiously via our phones, and, overall, deserved comments that might do any kind of material, physical, reputational, or other damage to its self-avowedly faultless intentions and outcomes.

So, simply put, they’re just not likely to say the following at any time or event, as far as I can figure about the near-term future.

“We get it, America, as well as our dear friends worldwide. And not only are we truly sorry for the damage our arrogance and negligence has caused you, but you’ll know that we sincerely mean it when we open negotiations next month to establish the international framework needed to fully restore and make whole again the status quo ante between your nation and ours.

“In being so committed to repairing our damaged relations with you, our trading and peace-sharing friends, we hope you see, then, that our responsibility-guided, conscientious, compensatory civil response to your expression to us about the harm we caused you and your people will exceed in all relevant measures and forms our mere words of regret, remorse, and true sadness resulting from the current state of tragic misgivings.

“China wants to continue helping lead the world by keeping your trust in us and our people, and thus remaining your friend.”

In order to support the most important political objectives of the DNC writ large in the 2020 election, COVID-19 hype is essential:

Without COVID-19 panic Democrats cannot easily achieve ‘mail-in’ voting; which they desperately need in key battleground states in order to control the outcome.

Without COVID-19 panic Democrats cannot shut down rallies and political campaigning efforts of President Trump; which they desperate need to do in key battleground states.

Without COVID-19 panic Democrats do not have an excuse for cancelling the DNC convention in Milwaukee; thereby blocking Team Bernie Sanders from visible opposition while protecting candidate gibberish from himself.

Without COVID-19 panic Democrats do not have a mechanism to keep voters isolated from each-other; limiting communication and national debate adverse to their interests. COVID-19 panic pushes the national conversation into the digital space where Big Tech controls every element of the conversation.

Without COVID-19 panic Democrats cannot keep their Blue state economies easily shut-down and continue to block U.S. economic growth. All thriving economies are against the political interests of Democrats.

Without COVID-19 panic Democrats cannot easily keep club candidate Joe Biden sealed in the basement; where the electorate is not exposed to visible signs of his dementia.

Without COVID-19 panic it becomes more difficult for Big Tech to censor voices that would outline the fraud and scheme. With COVID-19 panic they have a better method and an excuse.

GatorGuy in reply to notamemberofanyorganizedpolicital. | July 12, 2020 at 1:53 pm

‘ Makes perfect sense to me. Good find, notam; thanks.

The Truth About Mortality Rates | COVID-19 Facts from the Frontline

This is a gentle reminder that this situation is why Tony Fauci was willing to fund research on coronavirus in China. If we had required that the research be done in the US, there would have been droves of samples and researchers between China and us.

The initial outbreak would have been here.

A great journalist’s scoop about a hopefully unclassified memo between NIH and, say, DHS or the IC to that effect would be nice.
The theory certainly does have some instant appeal facially, however.

All nations need to institute a worldwide travel ban to and from China and ban all exports from China immediately and until the world is free of all viruses.

Stanford Prof: Median Infection Fatality Rate Of COVID-19 For Those Under-70 Is Just 0.04%