My appearance on WSJ at Large with Gerry Baker on Fox Business: “Those are the people who are really suffering” 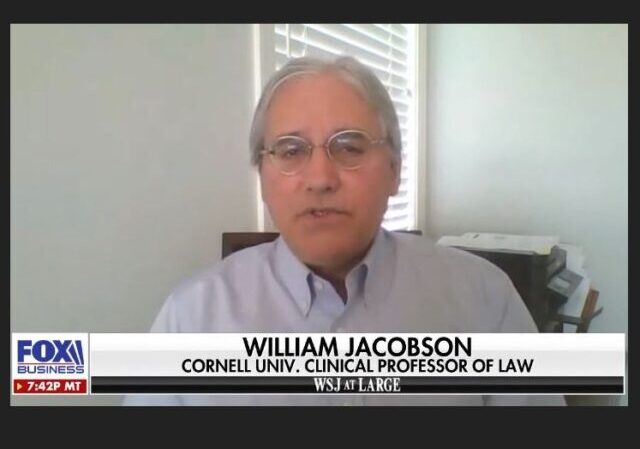 On Friday, July 24, 2020, I had the pleasure of being interviewed by FOX Business’ Gerry Baker on “WSJ at Large” regarding cancel culture.

The interview was enjoyable for at least a couple of reasons.

First, the interview was 8 minutes, which in network TV time is like forever, so I had a chance to go into deeper discussion than usual.

Second, Baker didn’t take the easy road, he raised issues — for example the claim that people who complain about cancel culture just don’t like being criticized — I hear repeated all the time; so I was able to address accusations raised by my detractors.

Here is an excerpt from the Fox Business story, Fighting back against the cancel culture:

It will take the strength of those being attacked to put an end to the “cancel culture” in our society, according to a university professor who says he was targeted himself.

Cornell University Clinical Law professor William Jacobson told FOX Business’ Gerry Baker on “WSJ at Large” people need to stand up to the pressure from those who try to silence and humiliate them for taking positions that don’t align with the “progressive” agenda.

“What we have to recognize is that you can’t just view things at the surface,” he argued. “The people speaking out don’t necessarily represent the majority of people. And therefore we need to gear our efforts towards emboldening people who are silenced to feel comfortable in speaking up.” ….

Jacobson said he’s been advised by the dean that he has academic freedom and won’t be fired. And he notes that while he’s received no support from the other faculty members, he has gotten backing by many students.

“[Students] have emailed me and said I have a lot of quiet support in the building,” he noted. “But everyone is afraid to speak up.”

So what does he think it will take for those facing the so-called “mob” to push back?

“I don’t have a magic answer to that,” he explained. “But I think shedding a light is the first step. But it’s a real problem in institutions like in academia, which are overwhelmingly controlled by one political ideology — which is liberalism, leftism, whatever you want to call it – -but it’s almost a uniformity of opinion and that’s at the heart of the problem.”

But Jacobson thinks it won’t be easy to reverse the current situation in colleges.

“Until we diversify the ideological foundation of academia, we’re not going to change this cancel culture on campus,” he said.

"I may be the target, but I'm not the victim here, the victim here are students that are bullied into silence and the culture of the law school, which as it relates to BLM is completely repressive."

I was able to make another point about how the victims of cancel culture are not the high profile targest, but the people without protection:

BAKER: People out there who say, this talk of cancel culture is over overdone. You know, you expressed your opinion, you got criticized for it. A lot of people didn’t like it. They told you they didn’t like it. And you’ve still got your job. You’ve still got your academic position. You’re still free to say, we want you on this program and others. And that this whole thing is just, you know, people don’t like what’s going on. And don’t like being told that people don’t agree with their views. Tell us, explain exactly why that’s wrong.

WAJ: Well, it’s very different. This is not merely criticism, what I’ve received. It’s an attempt to get me fired. And the fact that it was unsuccessful so far, doesn’t really mitigate the maliciousness of that attempt. It’s an attempt to interfere in my employment by having people boycott my course, and most important, it’s an interference with students’ education. Why should a student have to make a political decision whether to take my course? If they feel my course is good for their education, they shouldn’t have to cross a virtual picket line.

Nice interview, as was yours of the other night on Breitbart.

Yet again we see it. In The Coming of the Third Reich (2003), historian Richard J. Evans explains how, in the early days of National Socialist Germany, Stormtroopers (Brownshirts) “organized campaigns against unwanted professors in the local newspapers [and] staged mass disruptions of their lectures.” To express dissent from Nazi positions became a matter of taking one’s life into one’s hands. The idea of people of opposing viewpoints airing their disagreements in a civil and mutually respectful manner was gone. One was a Nazi, or one was silent (and fearful).

To call themselves Antifa, anti-fascists, is straight up Orwellian.

Antifa actually originated in 1930’s as the Communist street enforcers fighting the National Socialist street enforcers (Brownshirts). Today’s “Antifa” use essentially the identical logo as their 1930’s counterparts. So in the current lexicon their “anti-fascist” is really their Commie-speak for anyone who opposes Communism.

READERS of LEGAL INSURRECTION DO WATCH THIS VIDEO (I’ve been trying to spread the word):

A woman from the former Yugoslavia recognizes the the attempted revolution currently underway in this country, because the same playbook was used in her (no longer existent) country in the 1990’s. There the evil agenda was successful.

She lays it all out, the step by step, hoping that we can avoid the same fate.

And provides sound recommendations about what we should do, so that the fate she and her countrymen lived does not also happen here.

She concludes without direct reference Ronald Reagan’s “Time for Choosing” speech, but poignantly echoes him: she says that if we Americans don’t stand up and prevail now, the whole free world will be lost.

A POWERFUL POWERFUL VIDEO THAT YOU SHOULD WATCH AND PASS ALONG TO EVERYONE YOU KNOW!

Dead is dead. The totalitarian ideology of your killer matters not.

Nazism and Communism imagine themselves as exact opposites. They are at each other’s throats wherever they exist all over the world. They actually breed each other; for the reaction against Communism is Nazism, and beneath Nazism or Fascism Communism stirs convulsively.

Yet they are similar in all essentials. First of all, their simplicity is remarkable. You leave out God and put in the Devil; you leave out love and put in hate; and everything thereafter works quite straightforwardly and logically.

They are, in fact, as alike as two peas. Tweedledum and Tweedledee are two quite distinctive personalities compared to these two rival religions.

One is reminded of the North Pole and South Pole. They are at opposite ends of the earth, but if you woke up at either Pole tomorrow morning you could not tell which one it was. Perhaps there might be more penguins at one, or more Polar bears at the other; but all around would be ice and snow and the blast of a biting wind.

Thank you, Professor Jacobson, you are quite correct, the purpose is to shut up everyone else.

notamemberofanyorganizedpolicital in reply to rabid wombat. | July 25, 2020 at 11:09 pm

Until the Spanish Inquisition!

Nancy and her DEMS are not expecting the Spanish Inquisition..

It may be a worthwhile investment to hire an independent outside polling organization to survey Cornell Law Students’ attitudes on freedom of speech and academic freedom. Cornell and many other law students offer classes on the rights of students. I wonder if there is a statistically significant difference between the students who have taken that class (or the First Amendment Law Clinic) in comparison to the law students who had just taken first year constitutional law.

Suppose the New York State Bar exam uses Prof. Jacobson’s situation as the basis for an essay question. How many protests would that create? Everything that students are taught in law school and in the bar review courses indicate that the correct answer is that Prof. Jacobson was well within his rights. Extra points would be given if the exam answer also raised “tortious interference with contract” as an issue that could be raised against the petition organizers. I can’t think of a single public policy argument on the other side, other than objectionable speech should be met with “more speech.”

Here Is Your Redpill – Question Everything | Jeremy Elliot Monologue

If there is anyone else out there daring to even try to make these points against cancel culture, I haven’t heard them. At best, they’ll protest being targeted as individuals, like JK Rowling. But no one is making the case that the true victims are the students and more broadly, the citizenry at large. We aren’t merely banned from participating in the discussion, we are not even allowed to hear it.

It would seem axiomatic that only those who believe they possess dominant political power would be opposed to free speech.

For the assertion that speech restrictions can or do somehow protect “the oppressed” makes no sense, for when have oppressed peoples ever had the power to control anyone else’s speech?

Yet the claim seems to be, “I’m so powerless I have to shut you up (to protect myself).” If you’re truly as powerless as you claim, how could you possibly think you could do this?

Take care. You’re using logic, similar to asking a suppressor of free speech the simple question, “What are you afraid of?” If they get mad, you just asked them a question they can’t comfortably answer. Be prepared for an entertaining dialog.
.

Thomas Sowell, a Prof.of Economics at Cornell from 1964-1969 penned an anniversary critique in 1999 “The Day Cornell Died” as a rebuttal to Alexander Downs who was a student in 1969 at the time of the militant 3 day take over at Willard Straight Hall and to his facts and memory in his published book; “Cornell ’69: Liberalism and the Crisis of the American University”. At the age of 90, Prof. Sowell is still speaking, writing and recently had this article was re-posted which remains relevant, not just at Cornell but on all campuses.

Prof. J. has, here at L.I., made known what is happening to conservatives not only at Cornell, but on all campuses. His commitment to truth to power stands him in great company with former Cornell U. Prof. Thomas Sowell. I wish him the same blessing to be as vocal and active in the same way 30-40 years from now.

NBC News, with authors Ben Collins and Brandy Zadrozny, have released a piece detailing Twitter’s latest attempts to stomp out the flickering embers of the QAnon ‘conspiracy’ group on their platform.

QAnon Quashed – Twitter “takes down” QAnon-related accounts
In the piece, Collins and Zadrozny highlight the broad strokes the social media company has taken to take down more than 7,000 QAnon related accounts, citing that all of these accounts participated in “targeted harassment”,

Twitter suffers from the communist disease same as DEMS…

It’s not “liberalism, leftism, whatever you want to call it.” It’s leftism. Liberalism is something else entirely and to conflate the two terms is to yield to the destruction of them and on the leftist’s terms.

Why do all you people keep calling cancer culture cancel culture?