The press and Democratic politicians continue to wage war on common sense in the name of control.

Coronavirus death rates are declining, and the medical system can handle more severe cases. California Governor Gavin Newsom is rolling back the economic reopening, which will severely hurt many small businesses that were beginning to recover from the initial shutdowns.

Bars, both indoor and outdoor, will be forced to close down statewide. Restaurants are being told to cease indoor operations. Outdoor dining and takeout are still allowed.

In counties on the state’s watch list — including Los Angeles, Orange, Riverside, San Bernardino and Ventura counties — even more businesses are being required to close their doors. That includes gyms, hair salons, barbershops, other personal care services, indoor malls, offices in non-critical sectors, and places of worship.

Additionally, several of the primary school districts are opening with online-only schedules when school resumes in late August.

California’s two largest school districts announced Monday that they would not be opening its facilities to students in the fall but will resume classes online.

In a letter to parents, Los Angeles Unified School District Superintendent Austin Beutner said the nation’s second-largest school district had decided to resume online classes due to a resurgence of the novel coronavirus.

“We made the decision to close school facilities before there was any occurrence of the virus at our schools, and this proved to be the right call,” Beutner said. “Science was our guide then, and it will continue to be. Unfortunately, Covid-19 continues to spread in the Los Angeles area and the virus is going to impact how we start the new school year.”

The decision was made even though several European nations have reopened schools without a surge in cases.

Part of California’s problem with the “surge,” in addition to its ignoring a drop in the fatality rates, is that the coverage is lumping total cases and deaths together…instead of focusing on the trends.

The cumulative case count in the U.S. crossed 3.3 million over the weekend, while the death toll climbed to 135,000, according to Johns Hopkins University. In California, the virus has taken more than 7,000 lives and infected 323,000, including 33,000 cases and 640 fatalities in the Bay Area.

A peak of the Centers for Disease Control weekly COVID-19 death totals reveals a substantially less grim picture. Here are the weekly totals of COVID-deaths nationwide, which show a significant drop from the mid-April highs of 17,000/week. 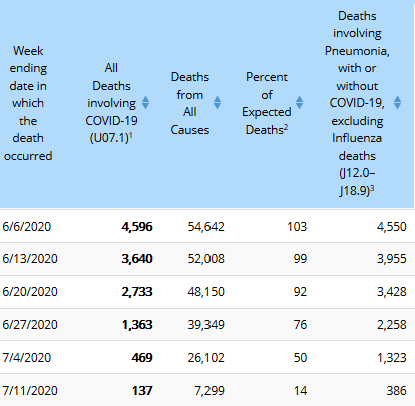 And, if you want to compare annual death totals, here are some real killers to address in California: 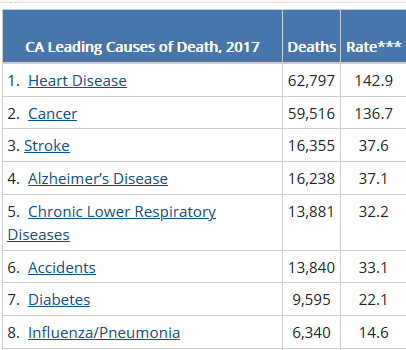 Looking at the totals, there have been 7,000 pneumonia-like COVID deaths so far, with the rate of death plummeting. And, in 2017, there were about 6300 pneumonia deaths for that year. While needless death is tragic, shutting down the state’s economy for COVID based on the numbers that are occurring seems ill-considered at this time. Furthermore, continued closures will likely lead to far more physical illness and mental health issues due to the consequences of unemployment.

But, no matter. Few people can viral virtual signaling better than Newsom.

“This virus is not going away anytime soon,” the governor said, emphasizing that COVID-19 doesn’t take weekends or the summer months off.

As officials try and curb community spread of the virus, Newsom said that part of the goal in closing indoor spaces is to encourage residents to “take it outside.”

He urged Californians to limit or avoid mixing with people who are not members of their households, but that doing so outside is preferred.

Can’t allow not being totally dependent on the left.

notamemberofanyorganizedpolicital in reply to 2smartforlibs. | July 14, 2020 at 1:49 pm

Governor gruesome is going down along with his extended family relatives of political Democrats which includes Pelosi.

Our governor rolled back as well. Restaurants that had just been allowed to reopen with limited indoor seating had the rug pulled out from under them yesterday. They had just pulled back employees, ordered food and then were told they had to once again close indoor dining. This is the final nail in the coffin for many of them.

When the dust settles, states need to reevaluate the amount of power they’ll allow governors via public health orders and hopefully, not allow them to be indefinite in nature. You’ve got two weeks to deal with an emergency and then the legislature is going to step in and take over.

I have always been interested in the legal authority for a governor to close businesses wholesale, control or impede interstate commerce, or restrict the rights of the people in any manner without due process or the regular order of legislation. This “pandemic” has laid bare either we have fascists that govern us, or that, in truth, we have no actual rights as free people.

The stupidity required to incur the obvious costs of these transactions is so apparent, it must be a politically based act. Newsome himself says “this virus is not going away anytime soon,” therefore, we need to start living with it.

CA will soon be a failed state with dangerous prisoners released from its jails, a defunded and emasculated police force, a failed economy with endemic poverty (except for the international financial, political and techno-elite), a totalitarian mindset of conformity, and a mass of uneducated children heading towards adulthood with no prospects for any other future other than a life of poverty and violence.

Just when I thought my business would make it through this debacle Newsom pulls this shit. If last night is any indication we’ll be back on life support in a couple of months. And for what? Here in San Diego County through 7/4 we have had 387 ‘Covid’ deaths in a county of 3.3 million people. Of those 387 only 20 (!) had no underlying conditions. Seriously WTF!

Currently hospitals are not an issue so this is all about ‘cases’ which can be easily manipulated: https://sdcounty.maps.arcgis.com/apps/opsdashboard/index.html#/30b5e0fa2a5f4404b1219d8cd16b2583

Meanwhile my liquor license renewal is due at the end of the month (jacked up from $747 to $1,010…they did ALLOW us an extra month to cough up the money). Can’t wait to call my representative (Juan Vargas) again to bitch about this.

To paraphrase Bluto from Animal House: 34 years of hard work down the drain!

Annoying. I live in the FL Panhandle and there is no mando mask policy. Thank God!

Got a taste of it, though, when I was in San Diego, CA this past weekend. I found out that you have to wear a mask at all times in the airport and that translates to all “indoor public places.”

It sucked, but at least I wasn’t in Oregon where now you have to wear a mask OUTDOORS! Idiots.

SE Florida is mandating masks indoors and out, plus no walking on the beaches. The fake jump in “cases” was the justification.

Small business owners (i.e. Trump voters) survived the riots, so it’s back to Plan A.

I guess the economy was coming back too fast and people were starting to look forward to their kids going back to school.

I had no idea the masculine form of “Karen” was “Gavin.”

Why on earth would you think Gavin is masculine?

Californians is a small price to give up all your lives just to unseat Trump, so just keep telling yourselves that.

Another year of keeping the schools closed, and California will have the dumbest children in the Republic…. Wait, they may ALREADY be there. Highschool graduation rates are already the lowest in the nation and also has the lowest ranked high schools for of any state.

Having dealt up close and personal with the products of the Hawaii public school system, that is saying a LOT.

Being kept out of California public schools can only make them smarter.

So we can’t arrest illegals crossing the border, but we can arrest everyone already here for trying to live their lives? Do I have to go to the hairdresser in the shadows? Will I have to take communion in the back alley behind the church? Once all the prisoners are released from prison, will the rest of society be locked up instead? Will the trannies and I be allowed to sing in the prison showers? Who will be out in time to vote in November? I bet I get stuck in solitary–with a crummy mask.

Old Gruesome Newsom is perfectly coiffed–but the rest of us can’t go to the barber shop or the hair salon. Laws and executive orders are for the little (and now hairy) people. Fortunately I got my first haircut in three months when the first lockdown was lifted–and was thinking about getting a haircut this week. Oops–won’t see my barber for a while. But Newsom can see HIS barber!

Near us an upscale family owned Italian restaurant that has been in operation for 43 years just threw in the towel. In our small town east of the SF bay many small businesses are shuttered.

The parents of school age kids are up in arms. Last semester the teachers just gave pass/fail grades so nobody would be stressed due to the remote learning. Good luck getting into a decent university with P/F grades, but the teachers were not stressed so that is all that matters.

Tough to believe this has anything to do with safety. It’s all about destroying Trump.

Soon they’ll be putting masks on corpses. Hopefully they’ll be Newsom and Pelosi’s

No more Federal bailouts for states that close down!

My son and daughter-in-law are in negotiations with their employers to either work at home a few days a week or have some time off to help with their kids’ schoolwork this coming semester. Their district has released a schedule already – older kids who change classes with be in school 2 days a week and study at home the other three. With three high schoolers my daughter-in-law has put in a request that all three teenagers be put on the same schedule or she’ll face transportation issues. The high school is too far away to walk (10 miles) and it is hundreds of dollars a semester to pay for busing, especially when you have a driving student in the family. Now – multiply this scenario out by millions and you have an idea of Governor Gav’s impact on families in California.