I wonder when DC will remove the one in Lincoln Park. 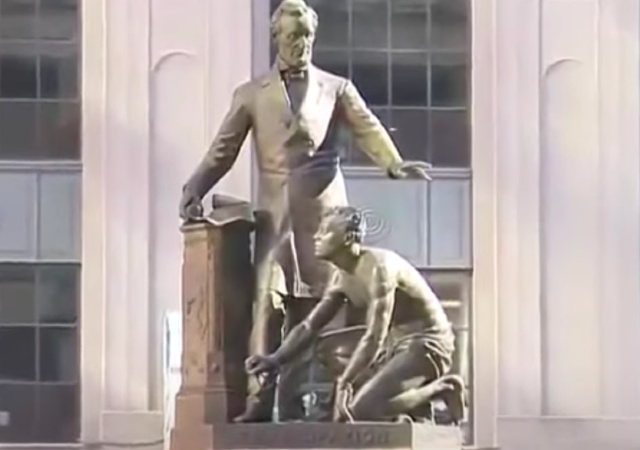 The Boston Arts Commission voted 8-0 to remove the Emancipation Memorial out of Boston’s Park Square and into temporary storage.

At least professionals will take it down instead of the mob?

The motion called for bringing in an art conservator “to document, recommend how the bronze statue is removed, supervise its removal and placement into temporary storage.”

It also includes commissioning detailed documentation of the memorial into Commission archives.

The memorial is a copy of the one located in Lincoln Park in Washington, DC. Freed slaves paid for that statue while “white politician and circus showman Moses Kimball financed the copy in Boston.”

Not that it matters, but it’s important to note that the freed slaves only paid for the one in DC.

Boston media said that the design has made people uncomfortable for awhile. It was not designed by blacks and people “objected to the optics of a Black man kneeling before Lincoln.”

The black man, modeled after Archer Alexander, has broken shackles. It looks like Lincoln is holding out his hand to lift him up.

But before we say Boston pandered to the mob I have to remind you that the city kept the statue on its “radar at least since 2018, when it launched a comprehensive review of whether public sculptures, monuments and other artworks reflected the city’s diversity and didn’t offend communities of color.”

Frederick Douglass was the keynote speaker at the dedication of the one in DC. He had some hard truths for those who place Lincoln on a pedestal, reminding everyone his motives were not so pure, but in the end, slavery came to an end (emphasis mine):

“Truth compels me to admit, even here in the presence of the monument we have erected to his memory. Abraham Lincoln was not, in the fullest sense of the word, either our man or our model. In his interests, in his associations, in his habits of thought, and in his prejudices, he was a white man.”

“It was enough for us that Abraham Lincoln was at the head of a great movement, and was in living and earnest sympathy with that movement”

The mob also wants DC to remove the one in Lincoln Park.

A Douglass descendent came out against the removal. His great-great-great-grandson Kenneth B. Morris, Jr., spoke to FOX 5 DC:

Kenneth B. Morris Jr. says his wanting to keep the statue in place has to do with the history around it, which includes who paid for it — and the important speech his great-great-great-grandfather Frederick Douglass gave at the unveiling of the statue.

“I don’t put this statue in the same category as Confederate monuments that were put up in the early 19th century as badges of servitude, badges of white supremacy,” he said in a Zoom interview from the West Coast.

He tells FOX 5 he would like to see another statue or something added alongside it that would tell the story how Black people in America liberated themselves.

“When we look back at the history of this country, Black people self-liberated themselves and that’s not a story that has been told properly,” said Morris.

But alas we are shown once again this isn’t just about the Confederacy memorials and statues.

It’s another reason why you cannot give in to the mob. Give them an inch they go 500 miles and then 500 more.

Wouldn’t it be up to the so called “community of color” to decide what is or is not offensive to them?

I have a problem with a bunch of bureaucrats deciding what I have to be offended for.

notamemberofanyorganizedpolicital in reply to Exiliado. | July 1, 2020 at 1:32 pm

Wanna bet that BAC is almost all white?

Rogan O’Handley ??
@
Oh look, another white Democrat violently assaulting a black man for not doing or thinking what he wants

henrybowman in reply to notamemberofanyorganizedpolicital. | July 4, 2020 at 4:41 pm

Wow, that guy is the spitting image of South Park’s P. C. Principal!

Especially since that particular statue was funded by freed slaves. Who certainly should have known what actual discrimination was all about.

According to WRKO in Boston, the removal is based on 50 people complaining they were offended. So 50 random people can force a City or State to change 120 years of History.

Of course Boston has Moron Marty Walsh as Mayor. Marty would be hard pressed to count all the way up to 50.

The mob wants nothing less than the destruction of American civilization. They have no clue as to what will follow if they get their way.
The Democrats are using the mob as their own “brown shirts”. They believe that they can obtain and keep political power by using the mob. They aren’t worried about the mob turning on them, but it will.

notamemberofanyorganizedpolicital in reply to johnny dollar. | July 1, 2020 at 1:34 pm

He tells FOX 5 he would like to see another statue or something added alongside it that would tell the story how Black people in America liberated themselves.

There was minority black participation, but mostly it was white privilege of unprecedented reparations in blood and treasure.

That white privilege is still, when they could kneel, standing against the insidious progress of diversity (e.g. racism) and other classes of bigotry.

Why don’t we just tape a banana to the side of the statue. Then it will become a modern art masterpiece, and unassailable in universal praise and admiration.

If any group of people were going to be accorded the much-touted-from-the-left “absolute moral authority” to decide something like this, I’d have though it was the freed slaves who commissioned the original of this statue.

The left would call them “White Supremacists” in a heartbeat, no matter how ridiculous the claim.

Lincoln along with generals, Grant, sherman, Thomas who did more to free the slaves than are white and therefore should be expunged from the history books.

On the other hand, those progressives bow down to the muslim religion – -“Co-Exist” – the last major religion that still practices slavery

Whether statues are destroyed by a violent mob, or, removed by a municipal “Commission,” the end result is the same, and, is just as disturbing — the censorship of works of art and expression, merely because a group of Maoist, totalitarian, goose-stepping Dhimmi-crats who view themselves as the exclusive arbiters of morality, cultural norms, historical interpretation, linguistic propriety, etc., have decided that it doesn’t adhere to their narrow and subjective worldview.

Frederick Douglass’ great-great-great-grandson has the right idea, but it will never fly. The D party does NOT want to remind people, especially blacks, how black people liberated themselves.

Much easier to keep people enslaved when you feed them a steady diet of victimhood and “it’s all Whitey’s fault.”

“Boston media said that the design has made people uncomfortable for awhile.”

Lincoln (a Republican) waged war to free slaves held in bondage by Democrats.THAT is what makes the Boston media uncomfortable.

Really? I wonder if the 300,000+ white union soldiers that died in the effort would agree.

The quote does raise a valid question though: can a people be self-liberated by someone other than themselves? How does that work?

I am tired of people acting as though the South was evil.

300,000 plus southerners died in the War of Northern Aggression.

Saying that has a pernicious purpose: dismissing the (mostly white) dead soldiers of the Union army. Critical race theory proposes that nothing whites do is good and if by chance they do good they do it for selfish reasons. Ergo, a few hundred thousand dead whites can make no claim to moral rectitude and their deaths have no historic meaning.

We all can learn a lot from Fredrick Douglass.

Lincoln, like us all, was a complicated mix of good and bad. Over time, history has seemingly omitted most of the bad while lifting up the good. Now, it appears that an over reaction the other way is going to go after Lincoln’s head, too.

Similarly, I took the Freedom Tour in Boston last year. The guide, who was black, have the greatest presentation of Boston Revolutionary history I have ever seen, read, or heard. He captured exactly the fact that people are complicated and we must present all of them….no hiding….and with objective eyes, we’ll be able to know if they have real virtue or are villains. Lincoln, though not perfect, had virtue.

Lincoln was the president most responsible for turning the original concept of a “federal” caretaker government into the “national” nanny government we have today. After you read Douglass, read DiLorenzo.

If we’re now supposed to repudiate Abraham Lincoln, does that mean that these things are all “fruit of the poisonous tree”?

Leftists had better be careful what they wish for.

Obama and Biden were orchestrating the coup

against Flynn and Trump.

But sure, let’s keep trying to reform the police
and let arsonists burn our cities.

Just can’t help but feel like continued absolute travesties such as this are going to culminate in some sort of backlash. Maybe a big one, even.

Boston Mayor Moron Marty Walsh is in a race to the bottom with Mayor Lighthead of Chicago. Both are trying to destroy their cities at a rapid pace.

notamemberofanyorganizedpolicital in reply to Frank Hammond. | July 1, 2020 at 1:42 pm

Is Marty a lesbian for Hillary too?

Why not save money in these times of no incoming tax revenue. Just get a torch and cut the African-American out of the statue. Now no one is the wiser and Lincoln still looks very Presidential and emancipating.

Who were made uncomfortable? Black people? More likely it was a bunch of hand-wringing, sniveling white Prius Pansies.