Holy Mary, Mother of God, pray for us sinners. 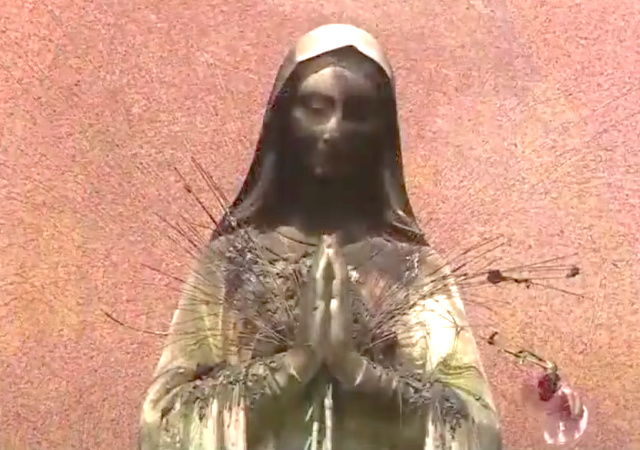 Someone set a statue of the Virgin Mary in front of St. Peter Parish in Boston, MA, on fire:

Police spoke with Boston firefighters, who said that an unknown suspect had set fire to plastic flowers, which were in the hands of the statue, causing the face and upper body of the statue to be burned.

“I was shocked. (There’s) disappointment, sadness,” said Fr. John Curran, the pastor of Saint Peter Parish. “The image of Our Lady is so important for us and our faith. It’s such a contradiction to her love. Mary would never desecrate anyone, never hurt anyone, only offer them the peace and love of Jesus. I think that’s where it really hits us in our hearts.”

A Boston firefighter, who said he was among those who responded to the fire, shared a photo of the burned statue with NewsCenter 5.

The church placed the Blessed Virgin Mary statue outside “just after the end of World War II to welcome back soldiers who were returning to Dorchester.”

I love my Catholic faith so much. No matter who wrongs us we always reach out to them:

Curran hopes whoever started the fire will come forward and said that the church would be there for them if they were looking for help.

It saddens this Baptist to see such things.
.

“Many are the afflictions of the righteous:
but the LORD delivereth him out of them all.”

Was it just an attack on a statue or was it an attack at the catholic faith?

This will loose a lot of votes that come from the liberal Catholics.

I’m not sure it will be very easy to separate the two. But I’m also not so sure that the Catholics on the Left value their religion so highly as to interfere with their voting.

But what do I know, I never dreamed we would have a Pope who I believe is “only” a Socialist. But then I grew up with Pius XII with his anti-Communism and praying for Cardinal Mindzenty as he sheltered in asylum from the Communist government of Hungary in the US Embassy.

I don’t believe progressive Catholics will desert the Holy Democrat Party any more than progressive Jews will.

I’d like to think that not long ago, this action would be considered a hate crime.

Perhaps this has nothing to do with hate or anti-Catholic or anti-Christian. These Marxist are well trained in revolutions.

Perhaps this is just another test to see where the patriots will draw the line. So far, we continue to accept the escalations. Those with a sworn duty to defend the Constitution are MIA as are those politicians who were to defend the USA from all enemies. The Marxists are trying to see if the good people are a paper tiger or a sleeping bear. Treating a battle in a war as though it were a law enforcement (reactive only) situation is effectively to surrender. Actually, we are not even engaged in law enforcement if Seattle and Minneapolis and other centers of Democrat control are examples.

You trigger a thought, TX … there’s an old testament story (Numbers 25) of a plague among the Israelites when they ignored God’s command and intermarried with the Baal worshiping Moabite and Midianite women. When an Israelite man brought his Midianite woman to the entrance of the tent of meeting, Phinehas was engraged and taking his spear ran the man and woman through which stayed God’s wrath and stopped the plague. It’s written up to that point 24,000 died in the plague.

I do wonder from time to time when a Phinehas will rise up and say enough! Metaphorically, as a people of faith, we seem to put up with a lot of crap from the Goliath’s of the land, only to discover when one of us does stand up to them, they are easily dispatched and their blasphemy is silenced when finally we get over our fear, remember the One from whom our strength comes, and act in His righteousness. Would that I knew better in context of Ephesians 6 how to take the fight to the real source of wickedness. I don’t get the impression there are very many Christians who are practiced in spiritual warfare of the confrontation type.

Benny
@bennyjohnson
Christians at Grace Baptist Church in Troy, NY we’re gathering to worship Sunday when BLM stormed their sanctuary and took over their church.

The Friendly Grizzly in reply to notamemberofanyorganizedpolicital. | July 13, 2020 at 11:25 am

Note that this took place in a state where the peasantry is disarmed. This wouldn’t have been tried in Texas or Alabama or Tennessee.

Three Churches Have Burned in Just Over 24 Hours,
But You Wouldn’t Know It If You Watch National News

sickening–mary, a symbol of love and grace for over two thousand years and defiled/disfigured for what purpose? to gratify the insecurities of some wannabe ” activist? ” to prove that NOTHING is sacred, NOTHING is untouchable?

soon these activists are going to discover, to their collective shock, that they aren’t untouchable either

If you don’t stand up now when will you take a stand?

If we don’t take a stand how, we’ll be taking a stand in front of a wall, being shot.

Any who thought this would end with Confederate statues is hopelessly naive.

Commies hate all religion, because truly religious people have a moral compass that resists them.

The attacks on our heroes, on our history, on our common culture and on our religions has a single purpose: to isolate people, make them miserable, and convince them that their government should be replaced.

Not that these lunatics have credibility, but they make complete frauds of themselves by by bowing to islamists (obama) and covering their heads in contrition (pelosi):

notamemberofanyorganizedpolicital in reply to TheFineReport.com. | July 13, 2020 at 2:53 pm

Barrack is Communist and Muslim
and an Epstein Island visitor.

TheFineReport.com in reply to notamemberofanyorganizedpolicital. | July 13, 2020 at 6:06 pm

What in the world was there for obama to do on Epstein Island? It’s a paradise for men who want to have sex wit young women.

Then again, myaybe he thought the entire island was michelle’s ass.

They do. Both Antifa and Muslims have motivation for these attacks, though the media would never dare suggest the latter.

Now and at the hour of our death, amen.