West moved to Texas in 2015 to serve as an Executive Director for the National Center for Policy Analysis, which shut down in 2016. 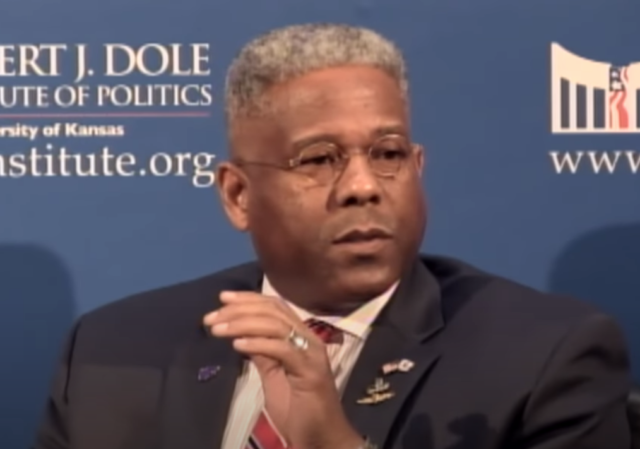 Former Congressman Allen West was elected in the wee hours of Monday morning to serve as the Texas GOP’s next chairman, unseating current chairman James Dickey.

I just want to say how truly humbled I am by this honor, and that I will work hard for Texas and Texans.

I would like to thank my amazing and dedicated team, as well as an incredible number of supporters.

The Texas Democrat party released an official statement and decided to go the racism route, which is just a little curious: 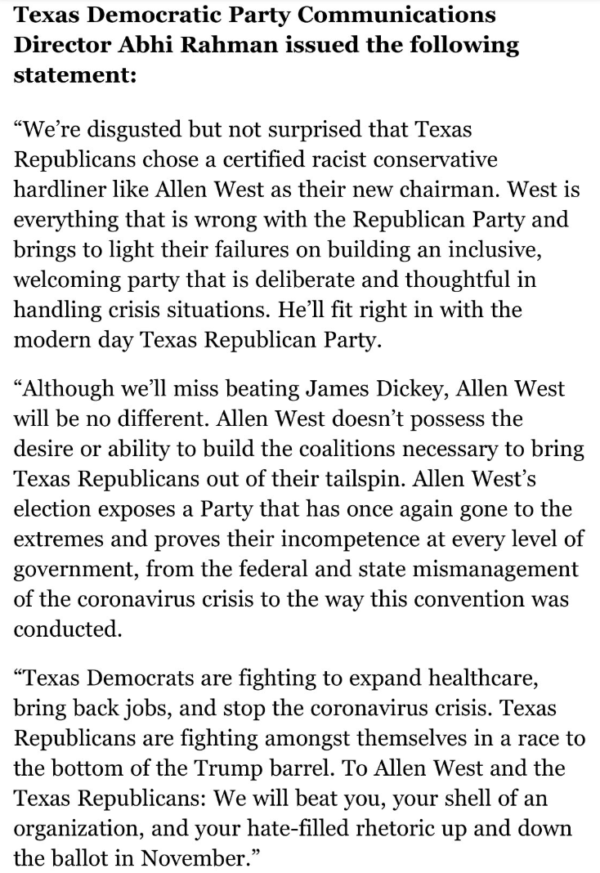 West moved to Texas in 2015 to serve as an Executive Director for the National Center for Policy Analysis, which shut down in 2016. He served one term in Congress before being unseated in the most expensive Congressional races of that season.

Was that Democratic “statement” from The Onion?

Does the fool who wrote that realize Col. West is black?

What “tailspin” is the writer referring to? The one where Republicans have been thrashing the Democrats in every statewide leadership position since the mid-1990s?

What incompetence? The “incompetence” that has made Texas one of the most desirable places in the USA to live and build a business?

In short, whatever Dim wrote that is either a complete moron or terribly weak at gas-lighting. Possibly both.

I agree with your sentiment but it’s not 100% accurate. Believe it or not there are a few county positions that have statewide power, in particular the DA. That county is Travis County, home of Austin. It’s a convoluted way it ended up this way but it’s true. That is one of the reasons that the Dems focus so hard on ATX. Statewide power from a country position and a very large university to draw votes from. Also, this had a lot to do with Rick Perry controversy when Lemrech was busted for DUI and he told the Dems to get her out. Perry was in the right because it had to do with statewide jurisdiction.

Also, the transplants (I being one, but not left) are turning the state a bluer shade of purple. I left last year because I was fed up with the ATX nonsense and am dealing with some family health issues. I do miss Texas immensely and earlier today I was looking at properties online in much more conservative Hays County.

I’m prone to hyperbole when I get agitated.

I was thinking of the “major” offices such as Gov, Lt. Gov, etc, but yes, you are correct.

I’m also a transplant living in Austin off-and-on since 1986 after leaving Illinois. I love it here, but sometimes the liberalism getting a bit overwhelming. I just got done donating a few bucks to the group fighting to get the sidewalk camping ordinance overturned.

Lemrech… what a joke. Can you imagine if a Republican got pulled over with an empty bottle of vodka in the car and started threatening the officer’s job?

There is a lot to like about the Dripping Springs area, especially lately with all the breweries, wineries and distilleries popping up out that way.

I don’t know Abhi Rahman’s background, but Rahman is a common Muslim surname.

West is well known for taking no shit from CAIR.

Thus, to keep the indoctrinated from ever listening to West, the Party labels him as “racist”.

Cruz did not trounce O’Rourke; he should have beat O’Rourke a lot more handily than he did. It should have been a wipe-out, but Cruz just barely eked out his win: 50.9% to O’Rourke’s 48.3%. It was just barely out of the “automatic recount” range. As everywhere else, the Dems have the cities, and the cities have the population. That’s why the Dems are drooling over the – all too real – prospect of turning Texas.

The Democrats had their official statement written beforehand. They just filled in the name [Allen West] after their standard qualifier “certified racist conservative hardliner”.

They expected Hutu, they wanted Tutsi, but, alas, they got American, conservative, no less.

Insanity is running deeper with the left Marxist party.

Too bad he can’t replace Rhonda Romney, or whatever her name is ) who is the seemingly useless head of the GOP.

West is a warrior – literally.

If you read the democrat statement with a north Korean newscaster accent it makes perfect sence.

Seems like that Democrat statement was written with someone else in mind eh?