All 4,000 cadets are returning to the U.S. Air Force Academy for the fall semester

All 4,000 cadets are returning to the U.S. Air Force Academy for the fall semester

The Class of 2024 has spent the summer on the frontline in the war against the pandemic. 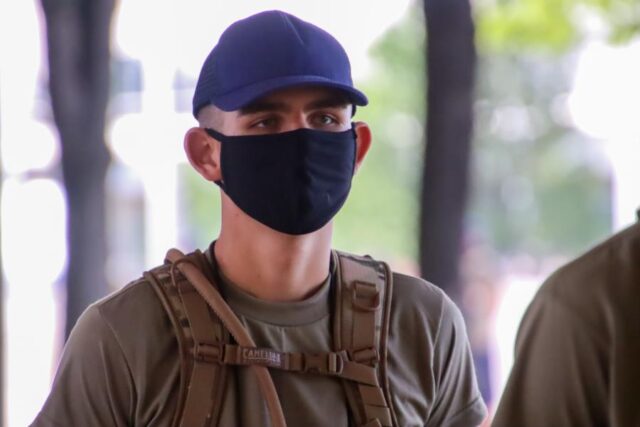 Legal Insurrection readers may recall that my son accepted an appointment at the U.S. Air Force Academy.

It turns out that USAFA has been using their Basic Cadet Training Program to determine how best to bring the entire campus back to the institution for the next academic year. My son and about 1200 of his fellow “doolies” have spent the past several weeks social distancing, wearing masks, and being tested for COVID-19 periodically . . . on top of the rigorous program that was already in place.

Now USAFA is bringing back all the cadets back to campus, for a mix of in-person and online training.

The U.S. Air Force Academy announced Thursday that its entire cadet student body will be returning for the fall, making it one of the first universities in the country to have its full student body on campus by the end of July.

Classes at the Air Force Academy will begin in mid-August in a hybrid format, combining in-person and online learning. The Academy said in-person classes may involve outdoor classes or using larger classrooms if there is a small class size.

USAFA officials said that as one of the key Air Force accession sources, it has been deemed mission essential by the Secretary of Defense. The rest of its cadet class will be returning to the Academy in the next week, according to officials.

The USAFA-program for the fall was prepared by a “Pandemic Math Team” of faculty who are experts in statistics, mathematical modeling, biology, virology, and public health.

The team also consulted with officials and guidance from the Colorado Department of Public Health, local public health organizations, the Air Force, the Defense Department, and the Centers for Disease Control and Prevention.

Faculty members developed a testing program to lessen the chances of a “runaway” outbreak of COVID-19 at the academy, the release said. And they gave the academy’s leadership tools and guidance on how they can adapt to changing conditions in real time.

Since cadets began being brought in from across the nation, the academy said, the rate of positive cases has stayed within the 1 percent to 2 percent that was expected. At that rate, the academy can still properly house and care for infected cadets, and those who had contact with them, in the quarantine and isolation space set aside for them.

The plans include housing 400 cadets in hotels off base for the fall semester to maximize social distance living. However, this will be no “Delta House” with toga parties.

The select group of healthy cadets living off-base will be subject the same stringent military training and academic standards, and safety protocols as the cadets remaining on base. Academy supervision will be at the hotels as well.

According to USAFA Commandant Brigadier General Michele Edmonson, the policies that have been established for the Basic Cadet Training program and the fall semester have been the subject of interest by many other administrators across the country. Schools planning in-person programs are likely using the lessons learned by the Academy.

The parents of the Class of 2024 have organized a fund-raiser to provide each new cadet a goodie basket as they transition to the next phase in their Academy career on Acceptance Day.

Good. This is the U.S. military. If they were too afraid of a disease with a very low mortality rate to even show up, they would not be worthy to serve.

But they apparently are worthy and I’m proud of them.

It’s less a matter of fear than having a pragmatic assessment, and willingness to use, the available tools.

The Academy can open up, in part because we now know how to avoid hospitalization for COVID-19, particularly among youngsters.

The Navy got hit earlier, and apparently its chain of command failed to authorize use of a drug very familiar to Air Force officers.

I have eight years USAF, sixteen years Air National Guard, that ended in 1995. I’m proud of them too.
.

There might be a connection between discipline and responsibility and the military academies.

What about the other military academies?

I have a friend with a son at the Merchant Marine Academy (yes, it is a thing), and he went back on July 5 for InDoc. They were met by the school cuz NYS is a jerk and wants to quarantine everyone.
She said that West Point is also opening for students.

I guess the government being in charge means that they can do what is right and not be afraid of snowflakes boycotting them.

I’m not sure we’ve covered that, gonzotx, but Leslie’s son is at the USAFA, so that’s something near and dear to her heart (and therefore to ours). There’s no pro-USAF to the detriment of other military branches here at LI, I can assure you. We are pro-all branches of the military, we just don’t have a mom of every branch member. I’m pretty sure that’s okay, right?

How not to do leadership.

“If you can’t treat someone with dignity and respect, then get out,” Lt. Gen. Jay Silveria told the group at the culmination of a forceful five-minute lecture on the “power of diversity…”

OK. What did this guy just do? Apparently the Air Force Academy is a Klan meeting.

If I remember correctly the incident that led the Air Force Academy Lt. Gen Silveria to make that speech later turned out to be just another race hoax perpetrated by a black cadet.

Of course, when that came to light Silveria never apologized to any of the white cadets, faculty, staff and cadet candidates for accusing them all of being racists. But I guess when your a General (even a Lt. General) you don’t have to apologize. Ever.

You remember correctly. Which is why I said you don’t do leadership that way. I don’t run toward thinking my guys are drooling, knuckle dragging racists. First off. At the risk of getting emotional I wouldn’t have anyone on my team who couldn’t or wouldn’t put up with a Sailor who didn’t look like them. That Sailor just might save their life.

I have been retired for a long time. I got a lecture shortly after Tail Hook when a couple of chicks decided to preach me about sexual harassment.

Like my mother and father didn’t raise me right. And the example was some poor guy at Naval Supply Center San Diego who did nothing wrong but they SH%T CANNED HIM ANYWAY.

Because that’s just how serious they took sexual harassment. As in, “hey! Can you put a shirt on over the halter top?”

There is nothing more dangerous than an old man. She didn’t expect push back. I really had nothing left to lose. So I shot back at the female JAG officer. “Seriously?” I sez. “You fired a guy for telling a woman to put a shirt on?”

The JAG officer is staring at me mouth agape. Finally she blurts out “don’t you think sexual harassment is something you need to protect you’re people against?”

“Honey” I sez, and I chose my words carefully, “Honey, you’re the danger I need to protect my people against.”

I got a standing ovation. Because I said what everyone was thinking.

He can’t be too big. The USAF doesn’t accept cadets that can’t fit in the cockpit.

Congratulations, Leslie. My son accepted an appointment, and is a 2024 cadet, too. From what we’ve seen online and heard from him, he’s having a great time and looking forward to finishing up BCT, and getting back onto the football field.

The thing about me and the Air Force.

I give them sh^t. But when the SEALs or Green Berets need help, when they are no sh*t looking death in the face, they call the USAF.

You don’t know how much it pains me to say this.

nordic_prince in reply to notamemberofanyorganizedpolicital. | July 27, 2020 at 1:17 am

Yay – that means all those students can get counted as multiple cases of Wuhan Flu throughout the semester. That ought to inflate the statistics nicely.