U. Alabama-Birmingham Egyptologist Tweets Instructions for Pulling Down Monuments During Protests

U. Alabama-Birmingham Egyptologist Tweets Instructions for Pulling Down Monuments During Protests

While she protects ancient sites from looters, there is no compassion for fellow Americans who were having their heritage erased. 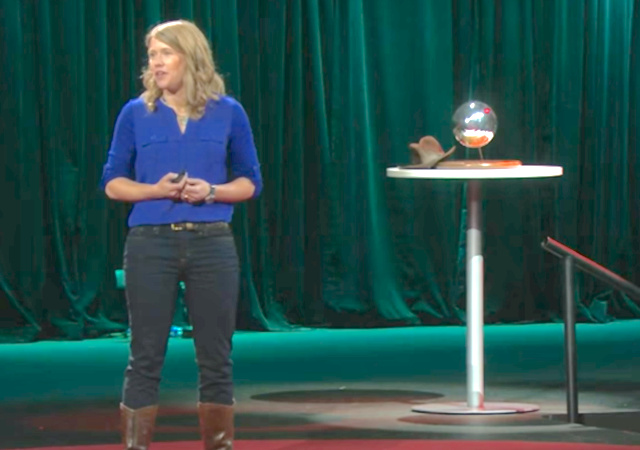 While most Americans were worrying about their communities, preparing to protect themselves from continued civil unrest, and attempting to restore peace, a University of Alabama -Birmingham professor fanned the flames of hate.

The University of Alabama at Birmingham archeologist Sarah Parcak tweeted details for bringing obelisks down as demonstrators defaced a Confederate monument and tore down a statue of Confederate Naval captain Charles Linn Sunday night.

Parcak’s tweets did not point to any specific protest, but hinted at the Confederate monument in the park, which is an obelisk, and her awareness of the demonstrations that followed the police-related death of Floyd in Minneapolis more than a week ago. She started by saying her comments on Twitter were a public service announcement.

‘PSA For ANYONE who might be interested in how to pull down an obelisk* safely from an Egyptologist who never ever in a million years thought this advice might come in handy,’ she wrote, explaining in a footnote that she was referring to any obelisk that ‘might be masquerading as a racist monument’.

Her tweets are below, which I have screen-captured, in the interest of posterity and as evidence, if needed. 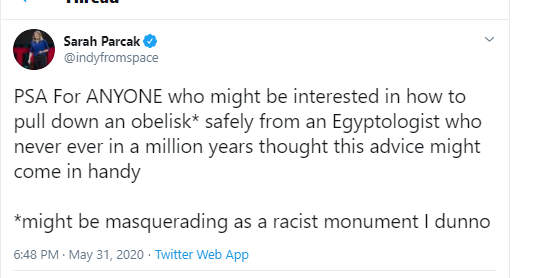 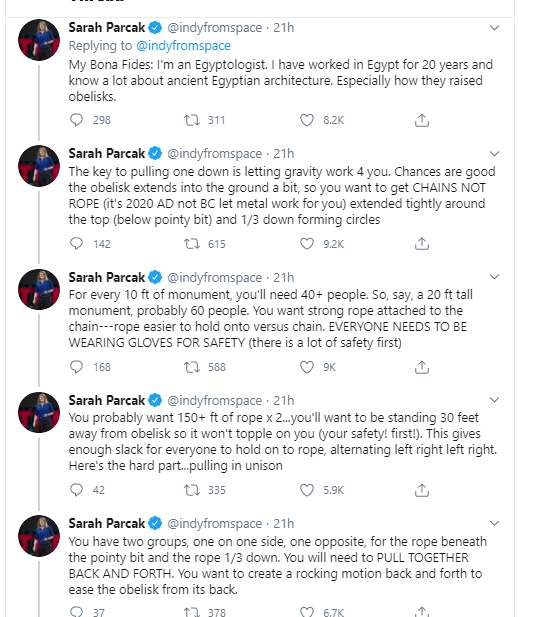 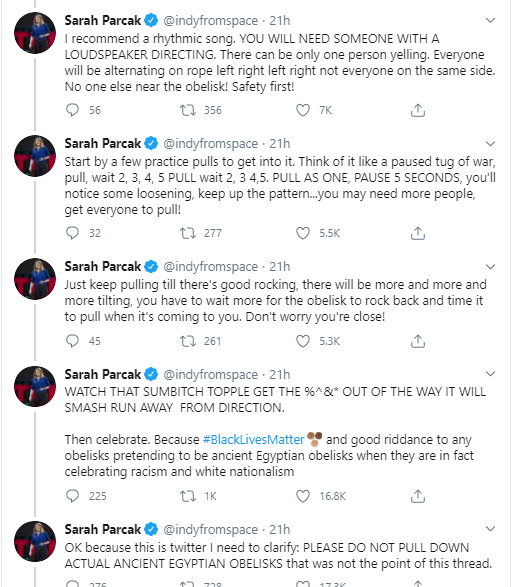 Now, to be fair, ancient Egyptians were notorious in tearing down monuments to ancestors they wished to forget. It took years for Egyptologists to determine that Hatsehpsut was a female pharaoh, as her heirs made a valiant attempt to destroy her legacy. Ramses the Great was notorious in replacing former kings’ names with his own. Perhaps Parcak was in a position to truly offer expert advice.

However, her recommendations have now earned her notoriety that she perhaps will not enjoy nearly so much as being awarded the John Simon Guggenheim Memorial Foundation 2020 Fellowship.

No nation can survive a situation where this is normalized. And America will not. pic.twitter.com/Q6GxmU1oE8

“Leave it the left to go full ISIS with destruction of historical monuments!” — Dave W https://t.co/aZEqadvxGu

@DHSgov @TheJusticeDept ANTIFA destruction given directions how to do it by Sarah Parcak @indyfromspace https://t.co/e8L6pgnrzb

Many who spotted Parcak’s instructions on social media contacted the University of Alabama. The officials appear to be distancing themselves for this thread.

The University of Alabama at Birmingham issued a disclaimer, saying her tweets don’t represent “the opinions of the university.”

Parcak’s ill-considered thread is shameful. I did a search, to determine what her thoughts might have been on the destruction of the Buddha statue in Afghanistan and determined she is an expert in using satellite imaging to track looted objects.

It’s too bad she didn’t show the same compassion for fellow Americans who were having their heritage erased and their properly looted when she decided to become a social media star on top of being an award-winning archeologist.

What goes around, comes around. Sometimes anyway. In some fashion. We can hope.

I’ve lost hope. Nothing happens to these people because the people above them are just as bad.

notamemberofanyorganizedpolicital in reply to TheOldZombie. | June 3, 2020 at 4:01 am

Thanks for the update and research, Leslie.

So another example of a liberal having no standards unless they are double-standards.

And the double good news in all this – she’s on a PUBLIC payroll.

We’re paying for the rope handlers who will used their rope to destroy us.

The theme is the same,

Attributed variously to Stalin, Lenin, Marx. Whoever, you get the point.

Basically it’s true. They will sell the rope.
All I see is small business owners cowering in fear of opening in case the government comes along to arrest them and take away their business license and then they’d not be making money.
They should be coming out and starting recalls and putting up money to get the criminals out of office.

Funny how in the faculty directory, her email has been deleted, unique among her colleagues.

Nothing like a Yankee (she’s from Maine) to tell people how to destroy Southern heritage. Phil Sheridan approves.

The lack of self-awareness and failure to appreciate culture and history is astounding in someone who works in this space. But then academic rigor left the academy long ago.

I’m sure that she’s ok with the Taliban blowing up World Heritage Sites as well… because feelings.

“The University of Alabama at Birmingham issued a disclaimer, saying her tweets don’t represent ‘the opinions of the university’.”

Well that’s a lame response. They no doubt have much harsher words for someone who supports traditional marriage (for example), I bet.

We can only imagine the response from UAB if an ardent Trump supporter had said, “Shoot the motherfuckers”.

Her lack of self-awareness should be surprising, but really isn’t. The Egyptians used a lot of slave labor to raise their monuments. Slavery in Egypt didn’t fade away until the last 20 years of the 19th century. Well after it ended in the US. Maybe next time she’s in Egypt she can put together a group of like minded anti-slavery people and pull down monuments to Egyptian slave holders.

Polentone
My intention was to upvote, not downvote. please retabulate accordingly.

So tear down all the mosques?

This is why Twitter is a pox on society. It’s inherently a tool of speedy and superficial self-promotion and self-aggrandizement, employed mainly by infantile and pathological narcissists in the Dhimmi-crat Party, in the entertainment industry and in pro sports. Now, the Dhimmi-crat morons in academia are getting in on the act, to sate their desire for relevance and attention.

By the fallacious Twitter standard, narcissistic, sanctimonious, self-promoting and self-congratulatory idiots such as Alyssa Milano, Lebron James and their ilk represent our greatest and wisest contemporary philosophers.

Not to mention authors who wish to “write” an extended article while copying and pasting to get it out quickly without much work. On the positive side, because I don’t read twittercrap I can breeze through this by reading the introduction and skipping to the comments.

Lack of awareness of history? There is no history, there is only “now” and The Party. …as Orwell pointed out in 1984. The mayor had the oblisk removed. The cleansing of history continues.

The Republic is being destroyed. There has to be a winner. However, there will be no place for the loser. This is now for keeps as the Left is seeing their grasp at power fading. A lot of money has been given these instigators so victory will be tough. The end point? Who loses, those still living, will and must be deported or permanently disenfranchised.

This shows that no matter how much life has been improved it can never appease those that take rather then make. We are in a world conflict and our enemies are allied with Antifa..and by extension portions of the Left.

Going to be a lot harder with snipers.

I sent an email to the University and got the same disclaimer–time to put pressure on the Board or whoever oversees that place–she’s clearly inciting terrorism while being paid, presumably, by taxpayers.

She didn’t break any laws, and even if she has no tenure a public university can’t fire her for exercising her first amendment rights.

How this woman is not arrested – or at least fired – is incredible.

Arrested for what? Her tweets were not incitement, so they’re protected by the first amendment. Remember incitement means speech that is both subjectively intended and objectively likely to cause the audience to commit a crime immediately upon hearing it. Basically that means speech that whips the audience into such a frenzy that they don’t make a conscious decision to act on it, but simply act on the speaker’s behest as if they were robots. Speech that merely advocates a crime and persuades its audience that it is right and proper to commit it, is protected.

And since it’s a government university the first amendment applies to firing her too.

I was in eastern Washington (state) a few weeks ago and noticed some graffiti on a cliff in the Columbia National Wildlife Refuge. I said to my lady traveling companion, “Today that’s considered vandalism. Yet somewhere nearby there are probably Native American petroglyphs that are considered of historical and cultural significance. Should some modern-day graffiti persist for two hundred years, it too will become of historical and cultural significance. But we insist it’s vandalism and try to remove it wherever it appears.”

Sorry, under the circumstances that is a dumb comment

We need to get the bytch fired!!

It appears that the anarchist movement was successful in pulling down the statue of the Park’s namesake, himself a Confederate veteran. The City of Birmingham began removing the much large Confederate Veterans Monument, 52 foot high obelisk.

FYI this particular monument was erected in 1905, and is privately owned, paid for and maintained as a condition of the City accepting the grant of 200 acres for the park.

This monument was put up to mark the 50 year anniversary of the end of the Civil War. Thus it was not one of the more controversial monuments put up during the Civil Rights movement era.

Other monuments in the park are dedicated to the fallen from the Spanish American War, WWI, WWII, Korea, Vietnam, Gulf War, etc. In other words it wasn’t out of place at all.

I grew up in Birmingham and have taken my wife and daughter to the park. Memories I won’t be able to share with my future grandchildren.

what amazes me is that the left is so afraid of old statutes. They are relics of an earlier time that we can’t understand – but to tear them down. I find Malcolm X offensive (antisemitic). does that mean i get to burn down Malcolm X college in Chicago? Of course not, it means that different people have different values. God help us when nuts like her and Biden are back in power. The will literally stomp on all of our necks – we need quarantine and you get arrested (or fined) for going to church but burn the city shoulder to shoulder – that’s fine.

They better trace her.

She may have been in this car.

White. Liberals. Are. Not. Your. Friends.

The Friendly Grizzly in reply to notamemberofanyorganizedpolicital. | June 2, 2020 at 5:01 pm

Like so many white leftists, they have “the help” do the actual work. In some sections of NYC, the leftists call.them,”the schvartzers”.

TheFineReport.com in reply to notamemberofanyorganizedpolicital. | June 2, 2020 at 5:30 pm

I can’t believe the University could keep her on, especially as an expert on Egyptian antiquities, now that she has incited rioters to destroy historical artifacts. Leftist hypocrisy knows no bounds.

She appears to be a Yankee carpetbagger whose contempt for the South and its people has blinded her to the need to preserve its history.

She should go join her kindred spirits in ISIS and help them to destroy Egyptian historical monuments. They were created using black slave labor, so they are racist monuments more so than the obelisk commemorating the 50th anniversary of our nation’s most destructive war.

Methinks that Sarah Parcak hopes whe’ll be the one portrayed in a Pharaonic-style monument to which bowing down is compulsory.

We all were once proud of her and her accomplishments. Now, maybe not so much.
.