“I wouldn’t say it’s a political statement. I think it’s just us being sensitive about the issues many people in our audience are dealing with.” 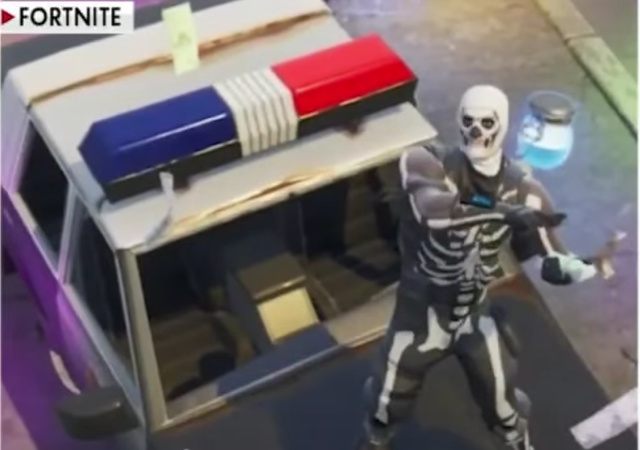 A source at Epic Games Inc. told The Wall Street Journal that they removed police cars from the popular video game Fortnite:

“Fortnite” is one of the most popular games in the world, with more than 350 million players as of May, according to its creator, closely held Epic Games Inc. The shooter-survival game, which normally features police cars and other vehicles, launched a new season last week that introduced a new map for gameplay. Many vehicles remained after the update, but not police cars, according to a person familiar with the game’s development.

“I wouldn’t say it’s a political statement. I think it’s just us being sensitive about the issues many people in our audience are dealing with,” this person said.

Epic didn’t respond to a request for comment. The Cary, N.C., company was last valued at $15 billion in 2018, and also owns the app Houseparty and licenses software to other game developers and companies.

The death of George Floyd spawned the #DefundThePolice movement. The Minneapolis City Council even voted to disband the police department.

Epic Games did not comment on the removal, but explained in a previous blog post how the Black Lives Matters movement delayed season three:

“Recent events are a heavy reminder of ongoing injustices in society, from the denial of basic human rights to the impact of racism both overt and subtle against people of color,” Epic Games said.

“The team is eager to move Fortnite forward, but we need to balance the Season 3 launch with time for the team to focus on themselves, their families, and their communities.”

People on social media noticed the removal of police cars:

“Yikes. The anti-cop sentiment is reaching everything. Sad times,” wrote a Reddit user on the social-networking site.

“Fortnite” player Morgan McNabb of McKinney, Texas, said she didn’t have an issue with Epic’s decision to remove police cars.

“I’m for it,” said the 24-year-old, who is white and just graduated from law school. “There really is major police brutality. Minorities are treated differently than myself.”

Well, technically it is a game about teenagers killing each other in lot batches, so perhaps the complete absence of any functional civil authority is appropriate?

That’s only half sarcasm. As fun/goofy as the game is, the world building behind it is very dark.

Have they inserted a Terrorist CHOP CHOP ZONE into it yet?

“The warlord of CHAZ/SPAZ/CHOP, Raz Simone, is a muslim rapper who has some financial connections to Dubai. Which is odd as I thought Mo forbade music (except drums I guess…but then again it is a point of academic contention to call most rap music actual “music”). The Gateway Pundit sleuths found that his postings were very jihadist….and he possibly produced and starred in a gangrape fantasy video of a white chick kidnapped by his character.”

The game makers are certain to stick these in as well.

Cornell U owned and had for over a century….

All the admin did was change the name when black students complained.

There should be millions in payment for all the insulted blacks for the century of time they had them.

Come on, the game is harmless. A bunch of cartoon characters eliminating each other without any bloodshed or real violence.

True. Honestly the genre mostly just annoys me probably because it feels like it is trying so hard to be “vineworthy” and “super edgy”. For a game standpount, it’s not significantly different from things I played back in the day like Tribes.

I think it’s when I run into the PUBG ” jailbait girl machinegunning her classmates” ad right next to the latest school gun hysteria, that I just want to wish a pox on all their houses.

That and the various gaming press putting on their High and Mighty Morals(tm) about how all the old fuddy duddies are not as enlightened as that are.

I guess I’m getting old…

it’s not significantly different from things I played back in the day like Tribes.

Yes it is. Tribes required you to have a plan, communication skills, team leadership and the ability to coordinate. Fortnite is just blasting until you respawn.

There is definitely some good team cooperation required to win at squads and in most variants of the game there is no re-spawning [I do play, my kids liked it so much I wanted to join in with them… don’t judge me… please].

yeah, cop cars are the problem with that game.

Much ado about nothing. The vehicles in the game play no central role they are just part of the overall landscape. The new season also features the entire island being flooded leaving 80-90% of the land under water so there are far fewer vehicles overall.

In the list of things to be upset about under the current climate this doesn’t crack the top 1000. This does however:

As violent attacks continue nationwide amid protests over the death of George Floyd, a viral video has emerged showing a man throwing a firecracker at a 66-year-old homeless man in Harlem, which explodes as the attacker trots off smiling.

How many gamers are really upset by the decision to remove police cars but will keep playing anyway? It’s like those who are incensed by the NFL kneeling to the Wokestapo but who keep watching the games and (more importantly) buying the NFL merchandise. Fortnight and NFL games are not basic necessities of life, so if what they did really bothers you then you are better off without them.

I most certainly are better off without them. They are entertainers who became obnoxious. Apparently they are planning on more of the same.

No such thing as bad publicity, apparently.

As long as our beloved boys in blue aren’t subject to the same laws the other 330 million of us are subject to, they deserve to treated as “the other”. Never saw anything about “qualified immunity” in the U.S. Constitution. Think Clarence Thomas even mentioned something about “being made up out of thin air”.

they ARE subject to different laws: imagine being fired from your j*b and having criminal charges filed against you BEFORE the investigation into your act is completed.

take your BS propaganda back to whatever slime hole you usually poast at. the audience here is comprised primarily of rational, educated adults.

Your last comment is a real howler. Oh, and your original point is also comically wrong. Police, at literally over a 99% clip, are absolved of any wrongdoing after killing a civilian. By an “internal investigation” or a local prosecutor who works with that same police officer on a regular basis.

Enjoy your Stockholm Syndrome as much as I enjoy getting down votes for simply telling the truth.

It could perhaps be implied by that same percentage that officers are often falsely accused and/ or justified in their response. This all or nothing philosophy just doesn’t fly.

got farm sim 2019 installed other day time to fire that up and learn it. may as well ignore everything else LOL 🙂

Has anybody noticed that the “new rules” for dealing with our new permanently-offended class are a lot like the list of rules you give the babysitter for your autistic kid?

“He screams when he hears sirens. If he sees an image on his cereal box that looks like him, he’ll fling the box. Sometimes, he likes to grab Grandma’s Hummels and enjoy how they smash — don’t bother to try to stop him. And remember, you have to keep telling him he’s a good boy, even when he acts out.”

Is this healthy for society, or what?