“Because the allegations in recent press articles have not been verified or substantiated by the Intelligence Community, President Trump had not been briefed on the items,” NSA Robert O’Brien said in a statement. 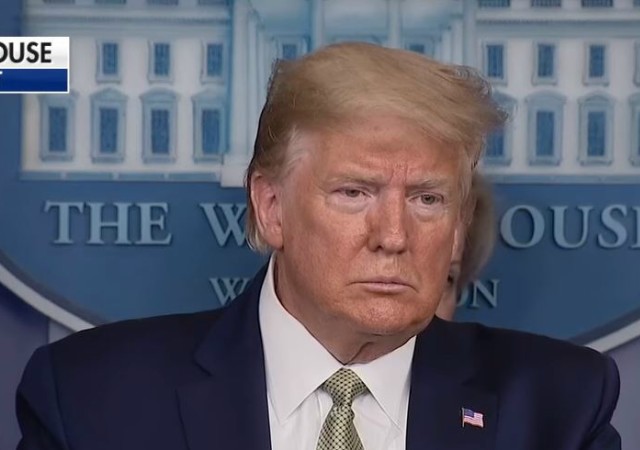 On Friday, the New York Times ran an alleged bombshell report alleging Russia had put bounties on American soldiers and other coalition forces in Afghanistan and that President Trump was briefed about it in March but had done nothing about it.

If true this is outrageous conduct by Russia. Lack of a response by @realDonaldTrump suggests he may be beholden to Putin. @POTUS is putting US troops’ lives at risk by doing nothing. Having served on active duty, I find this behavior by our Commander in Chief to be unacceptable. https://t.co/RbHpVRpqrT

If reporting about Russian bounties on US forces is true, the White House must explain:
1. Why weren’t the president or vice president briefed? Was the info in the PDB?
2. Who did know and when?
3. What has been done in response to protect our forces & hold Putin accountable?

The report was denied by Trump and flatly debunked by DNI John Ratcliffe, who tweeted that he confirmed “neither the President nor the Vice President were ever briefed on any intelligence alleged by the New York Times in its reporting yesterday.” Furthermore, he stated, the paper’s reporting “and all other subsequent news reports about such an alleged briefing are inaccurate.”

Richard Grenell, who was the Acting DNI when the alleged briefing supposedly took place, also blasted back at the various reports and ripped Lieu and other Democrats for not understanding “how raw intel gets verified” and for “manipulat[ing]” intelligence “for political gain.”

Because the New York Times doubled down over the weekend and other media outlets like the Associated Press filed reports that supposedly confirmed the alleged briefing, a full-scale feeding frenzy erupted on social media and Capitol Hill. Republicans pledged to get to the bottom of who knew what where and when, and Democrats and the mainstream media continuing to suggest this was just more evidence of Trump’s supposed allegiance to Putin over his own country.

However, more Trump officials are stepping forth on the record to confirm Trump was not briefed on the alleged bounties, including National Security Advisor Robert O’Brien:

Pentagon spokesman Jonathan Hoffman also issued a statement, noting that “to date, the DOD has no corroborating evidence to validate the recent allegations found in open-source reports,” which might explain why Trump wasn’t briefed on them:

JUST IN: Statement from the Pentagon on the intelligence that Russian GRU operatives had offered bounties for US troops in Afghanistan:

“To date, DOD has no corroborating evidence to validate the recent allegations found in open-source reports.” pic.twitter.com/Q1rOjtgQXc

Ratcliffe tweeted Monday night that members of Congress and Trump would be briefed “at the appropriate time” about the alleged bounties and what if any credible information they can obtain on them:

CBS News senior investigative reporter Catherine Herridge tweeted that a “senior intel official” told her the allegations “were not contained in the President’s Daily Brief (PDB)”:

DEVELOPING: A senior intel official tells @CBSNews the GRU/Taliban bounty allegations were not contained in the President's Daily Brief (PDB) which is the highly classified, daily summary of national security issues delivered to the President, key cabinet secretaries + advisers..

The official confirmed the NSC has been doing “due diligence,” and going back through their files since the story broke Friday, and they have not found the “intelligence assessment” described in media reporting. The official said the review is ongoing, but given current…

talks with the Taliban, intel about a GRU operation involving the Taliban, targeting US forces would have risen to the level of inclusion in the PDB. @CBSNews

In later tweets that matched up with other officials have gone on the record as saying, Herridge reported that an “intelligence official with direct knowledge” said the intelligence collected on the alleged bounties “did not go further” than “low levels” of the NSC because it was deemed “uncorroborated” and there was “dissent” within the intelligence community:

DEVELOPING: An intelligence official with direct knowledge tells CBS News there was an intel collection report and "NSA assesses Report does not match well established and verifiiable Taliban and Haqqani practices" + "lack sufficient reporting to corroborate any links."

The official said the inteligence collection report reached “low levels” NSC but did not go further, not briefed POTUS, or VP because it was deemed “uncorroborated” and “dissent intelligence community.” @CBSNews

With multiple officials on and of the record saying the intelligence was not substantiated to a level that would require the information to be in a PDB, and with the briefing White House officials gave to members of Congress yesterday, some of the Republicans who initially raised alarm bells appear to be backing down while still expressing concern:

Two GOP lawmakers briefed at the White House today, @RepKinzinger & @RepMcCaul, issue a joint statement saying they were informed of an "ongoing review to determine the accuracy of these reports" & believe this review should "take place before any retaliatory actions are taken." pic.twitter.com/BKCjtJGi1w

“After today’s briefing with senior White House officials, we remain concerned about Russian activity in Afghanistan, including reports that they have targeted U.S. forces. It has been clear for some time that Russia does not wish us well in Afghanistan. We believe it is important to vigorously pursue any information related to Russia or any other country targeting our forces. Congress has no more important obligation than providing for the security of our nation and ensuring our forces have the resources they need. We anticipate further briefings on this issue in the coming days.”

All the bluster about this story has got me wondering if it was planted by a disgruntled former (John Bolton?) or a current official as a way of distracting from something potentially damaging to Democrats and/or former officials that may be getting ready to drop in the coming weeks. Wouldn’t be the first time something like this has happened.

This thing smelled funny right from the start and was obviously another attempt to drive a wedge between Trump and his base. Thankfully most of us don’t seem to be buying it, especially now with all the denials and proof being offered that Trump was not briefed on the matter. As to why he wasn’t: if I’m reading things right it seems they don’t bother him with things that so far just seem to be unsubstantiated rumors. If that’s the case I would say that’s a wise policy.

As a member of the Gang of Eight, he would have seen this classified rumor and could then put his own fictional twist on it, like he did with the Ukraine call

More about firing up the base and throwing smoke for independents, I think.

No Trump supporters are going to think this latest is anything but dumb.

“The New York Times once again, without evidence, pushes Fake News in an effort to gaslight Americans.” – How NYT article should’ve been published.

You’ve got to accept that.

It’s Izvestia (news) on the Hudson, which prints all the fake news that fits its views, especially if Trump it screws.

notamemberofanyorganizedpolicital in reply to TheFineReport.com. | June 30, 2020 at 10:00 pm

Those news people are none too bright.
Welders, auto mechanics, sailors are smarter than them.

Comments section of this old article.

But, we all know that Barack Obama gave Iran money that was used to create thousands upon thousands of Shaped Charge IEDs that killed and maimed US Soldiers.

It is quite disturbing that the lies seem to never stop….

We will probably find out it was George Soros who offered the bounties.

One can argue that Soro’s money has caused the killing of more Americans this year alone than the Russians ever will.

Do they REALLY want to have this conversation?

Last I looked, a couple years ago, some 1600+ died in Afghanistan during the Obama Nightmare

maybe he was just more “flexible”

there’s no mcstain around this…..nope.

This unsubstantiated report has led to countless Dems seizing the opportunity to make the “IF THIS IS TRUE —-Trumps an asswipe” charge. When asked, “What if it’s not true,” they respond, “Well, then Trump still failed.”

If only Russian bounties was a problem.

We are rotting from within: the money and support to the left from soros/bezos/gates/styr/norman lear/david geffen/bloomberg/Dustin Moskovitz/Donald Sussman/Fred Eychaner/Jim Simons/Seth Klarman/Arthur sulzberger and the like seems to be used to killing more Americans than the Russians ever had, or ever will.

I don’t get it. Is the BLM stuff not working?

If the SLIMES wants to dispute it, make them produce the Classified PDB it came from. IF they cant it’s on them AGAIN.

How many “active” leak investigations are being run? Believe Barr said in the 100s, yet we’ve only seen two prosecutions and both were given light sentences. The Wolfe leaks were, in essence, covered up. The only way this stops is through heavy handed prosecution, which given Barr’s history the cover ups and non-prosecutions will continue.

The same people screaming about the alleged bounty are the same ones who cried when Soleimani was taken out. They obviously think the average American doesn’t have enough intelligence to see through their phony concern.

If the bounties existed, it would have been such a huge issue that had the attention of the top people in Defense, Justice, State, you name it. It would have been put under a microscope before briefing the President with a ton of background and options for addressing the issue, with a recommendation for action.

And I’m supposed to believe that Trump sat back and said, “Don’t do anything,” then everyone went, “okay,” got up and went on with their day. Seriously.

It just beggars the imagination.

Yet these same people don’t seem to have a problem with the US running its own bounty program. They even have a public database where you can search for the most wanted.
https://rewardsforjustice.net/english/

It would be no real surprise if our enemies had a similar program.

I still think the most likely explanation is that the low-level intel officer who caught this rumor and reported it to HQ is convinced of its importance and validity, and therefore assumes that the President must have been briefed on it, because how could he not be? And when the President seemed to have ignored it (because he never heard about it, because the officer’s superiors decided it wasn’t credible enough to pass up the chain) he got angry and went to the reporters, who have no idea how these things work, and told them all about it and they ran with it.

Without evidence, and according to unnamed sources. Sounds like #RussiaHoax all over again.

Why would an intelligence analyst report an unsubstantiated rumor to the President, unless the analyst was part of a conspiracy to make news out of it.

That reminds me of what Comey did with the Steele Dossier!