“She slammed against the fire hydrant and lay on the ground until a passerby called 911 and medics rushed her to nearby Beth Israel Hospital.” 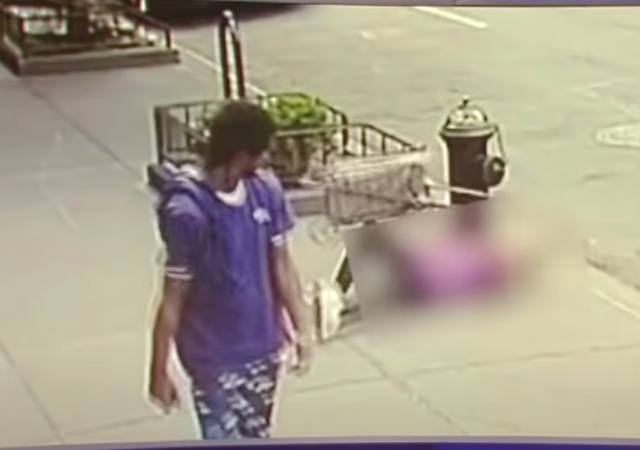 Police told many New York media outlets that Rashid Brimmage, the man accused of shoving an elderly woman into a fire hydrant in NYC, has been arrested more than 100 times.

The New York Post reported that Brimmage has been arrested 103 times since 2005. The paper outlined all of his past offenses:

“I thought a brick hit me or something hit me on the left side of my head, and I went right down and hit my head against the hydrant,” Geraldine, who asked that her last name be withheld for safety reasons, said of the attack. “Blood was coming out, not spurting blood, but blood was dripping.”

Geraldine, who has lived in Manhattan for more than 50 years, was on her way to Duane Reade when Brimmage allegedly shoved her to the ground near Third Avenue and East 16th Street in Gramercy Park at about 3:30 p.m. Friday.

She slammed against the fire hydrant and lay on the ground until a passerby called 911 and medics rushed her to nearby Beth Israel Hospital.

The attack has left Geraldine fearful to walk on the street. The super of where she lives is “trying to find somebody who will walk” with her “to a park nearby or to the supermarket.”

Yes, we so needed bail reform and prison reform. /sarc

Is he remanded to custody now, out on bail, or out on a ‘desk appearance ticket’?

And he was just turning his life around.

Has the sound of the Religion of Peace. You know the one that permits its adherents to treat the kafir as second class.

Permits it with the active approval, support, and protection of the government.

They voted for it. They got it.

In addition to 100+ previous arrests, it seems he was already out on bail on three different sets of charges that hadn’t come to trial yet.

What do you have to do in order to have bail revoked in NYC?

Averaging only 3 per year for every year since he was born…pretty impressive.

Not be a “Protected Class” or POC.

That’s because of his white privilege.

You sir are the kind of person that Google wants to ban from the internet.

A cop pushing down an Antifa instigator reaching for his gun belt and him bumping his head is a national tragedy. This old ladies story is just another day in NYC.

Sad,retired school teacher, maybe one of her students will come to her defense.

Why did this racist white woman attack this fine upstanding African-American child and then attack a public fire hydrant meant to keep us all, collectively, safe from fires?

Selective maiming might be the (only) answer for a little street justice.

Or, he should be “fixed”. That calms down many wild animals.

he’s lucky that wasn’t my mother–he’d be attempting assaults, sex crimes, etc. from a wheel chair for the rest of his life

You forgot that NY has eliminated cash bail. Either he’s been refused bail altogether, or he’s out.

My old ‘hood. I was born in Beth Israel. If I had witnessed this, I would have punched this guy in the face, repeatedly, consequences be damned. The victim could have been my mother, or, my aunt. Out-and-out racism and hate. Prosecute to the fullest extent. Which in New York State, probably means a suspended sentence and three months of probation.

… and a Starbucks Gift Card.

My question is, since Mr Brimmage’s favorite hobbies are assault and sexual misconduct…how the HELL has this guy avoided getting the crap kicked out of him somewhere along the way…????

Reverse the races of the attacker and the victim, and, of course, the Leftist media would be jumping all over it. But, the spite, cruelty and racism exhibited by many black criminals don’t merit any attention, of course. This is the bigotry of low expectations — why should black Americans be expected to comport their behavior in accordance with laws and with societal norms?

Note the quote from this CBS article, in which an “expert” reflexively deflects blame from the individual, to the proverbial “system” — true to Dhimmi-crat form:

Revolving-door justice, Dhimmi-crat style, in which career criminals are allowed to prowl the streets in perpetuity, preying upon the weak and the defenseless. This is such a profound disgrace and moral outrage.

Paging Dr. Dolittle…. only he can talk to the animals.

Cut his balls off.

If that was my grandmother….

How many kids does he already have?

this should be a campaign video for PDJT–this is a visceral, true example of what we can expect if the progressives are actually successful in ” defunding the police “–a genuine hoodrat, with over a hundred prior arrests, nevertheless released to prey on the helpless, the innocent with impunity

is this the sort of country we want to live in?