Klobuchar Withdraws From Biden VP Consideration, Urges Him to Pick ‘a Woman of Color’

Klobuchar Withdraws From Biden VP Consideration, Urges Him to Pick ‘a Woman of Color’ 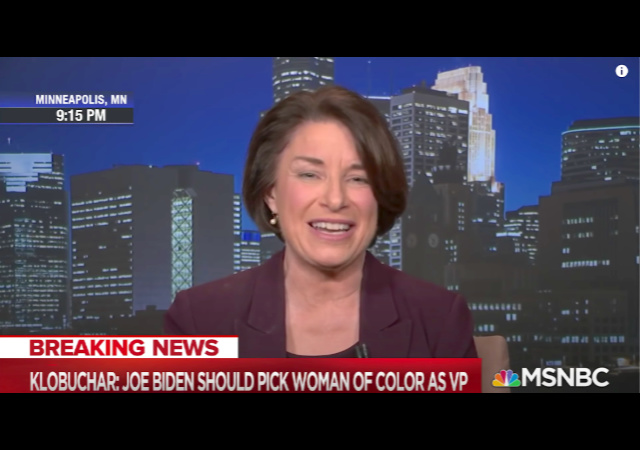 Biden promised to pick a female running mate, but Klobuchar wants him to pick a “woman of color.”

“I truly believe, as I told the vice president last night, that I believe that this is a moment to put a woman of color on that ticket.”

“After what I’ve seen in my state and what I’ve seen across the country, this is a historic moment and America must seize on this moment,” she said. “There are so many incredibly qualified women. But if you want to heal this nation right now — my party, yes, but our nation — this sure is a hell of a way to do it. And that’s just what I think after being through this in my state.”

However, Klobuchar received a lot of criticism after the death of George Floyd in Minneapolis.

As a prosecutor, “Klobuchar declined to bring charges against multiple police officers who were involved in shootings during her seven-year tenure,” including Dennis Chavin, the ex-officer accused of killing of Floyd.

Klobuchar admitted “that was wrong now” and “it would have been much better if I took the responsibility and looked at the cases and made the decision myself.”

Oh, I’m sorry Amy. I forgot that you were still here. You may go now.

Really it is Disgusting how Democrats treat Blacks
and, especially Black Women!

She wasn’t in the news any longer so this was her way to get her face back out there.
Must be pandering for some lesser position.

Sure, makes sense. You’ve got a demented old groping grifter candidate who should limit his choices for who to pick as his running make to those who have a black vag. Because “history” or something. Fucking morons.

Ya sure, it was her “choice”. Trying to restore her reputation but it won’t work. LOL. These movements end up being circular firing squads!

Ya sure, it was her “choice”. Trying to restore her reputation but it won’t work. LOL. These movements end up being circular firing squads!

As if she was still under consideration by the people making the decision (BTW, not Biden).

Yeah, I’m sure she withdrew all by herself, with nobody telling her “Girl, you are here only to occupy some space and pretend we are following a process. We already made our pick.”

Is Stacey available to be the VP?

I dunno, have you heard anything?

They should push Abrams on him, very much time with her, and he will likely commit suicide. Abrams is hideous, inside and out.

They already are pushing her!

and then Slow Joe dies of an aneurysm on January 22nd, and we have PRESIDENT TANK!

Methinks Michelle is in that Tank wearing a helmet like Dukasis……

‘Woman of color’ leaves much to the imagination:
So, Uncle Joey should pick a purple one – or a green one.

But he’ll offend somebody, no matter what his identity politics dictate.

I am withdrawing my name today as a candidate to be the nominee of the Democratic Party for the office of Vice-President of the United States in the 2020 election.

I base this on the fact that Senator Amy Klobuchar has withdrawn; since my chances were equal to hers, if she has concluded that she has no chance, it is likely (but perhaps not certainly) true that I also have no chance.

I regret that I have had to make the choice, and I look forward to serving the country in some other capacity. If I lived in Minnesota, I might run for Senator.

“I truly believe, as I told the vice president last night…”

He’s not the vice president. Mike Pence is.

Maybe she DID tell Mike Pence. All those white males are the same.

Yeah, “person of color.” I refuse to use such terms.

It’s the Dhimmi-crats that endlessly obsess over race — no one else does. You’d be a fool to not understand how the Dhimmi-crats’ dishonest, self-serving and unhealthy race obsession has prevented our country from moving forward. Remaining steadfastly and perpetually mired in past grievances inherently prevents progress. Perpetuating a mythology of contrived victimhood and perpetual grievance is similarly toxic. It’s utterly poisonous and corrosive to our civics and our society.

On a related topic: any idea when the term “person of color” will be deemed racist by those who pull society’s marionette strings?

It’s only a matter of time. The Dhimmi-crats move at light speed as they skip from their current grievance du jour, to the next alleged outrage. What is deemed acceptable now, will be verboten within the next five minutes.

As but one silly, recent example, I offer you those ridiculous “pussy hats,” colored pink, which were sanctimoniously proffered, then, dispensed with in a matter of days, for allegedly not being representative of all the color permutations of female genitalia, as well as being allegedly offensive to trannies who don’t possess female genitalia.

It is racist by design. The switch from various formulations meaning “black” to one meaning “non-white” is meant to convey that all the (ahem) diverse peoples of the earth, Tutsis and Tongans, Igbos and Inuits, are united into a single bloc by virtue of their oppression by the evil Persons of Pallor. Although in practice, some colors are more colorful than others.

“some colors are more colorful than others.”

Light color is racist. Dark colors cannot be racist. That is the crap they are shoveling.

When establishment conservatives use it too.

In other words, any day now.

Elizabeth Warren’s existence would seem to indicate that white is a color. As the oft-cited Fordham Law Review said in 1997:

“There are few women of color who hold important positions in the academy, Fortune 500 companies, or other prominent fields or industries,…In my three years at Stanford Law School, there were no professors who were women of color. Harvard Law School hired its first woman of color, Elizabeth Warren, in 1995.”

Well if you want to know what “science” (physics) says, black is the absence of color and white is the presence of all colors (light of various wavelengths). So by that definition, a white person is the ultimate “person of color.”

A “rainbow” of color… thought I saw a flag like that…

Excludes black, brown, and features the shredded remains of white.

When I see certain people sporting rainbow wear, I sometimes ask “why is God frowning?”

I hear Al Sharpton in drag is being seriously considered. It’s genius!

notamemberofanyorganizedpolicital in reply to DuxRedux. | June 19, 2020 at 2:54 pm

Sharpton is nixed then because he can NEVER
You Betta Work……..

Minnesotans ought not be entrusted in positions of authority or responsibility, in the public arena.

Better that Klobuchar might spend the next months helping her soul sister, Ilan The Harlot, protect her golden goose.

Perhaps as well hoping that by stepping aside as she did, if Biden wins in November she will be considered for a cabinet spot, Agriculture or another one that doesn’t get much press. AG might be too tough to get her confirmed (as of this typing). Or depending on what her long-term ambitions are, an ambassadorship somewhere nice for a few years.

“There are so many incredibly qualified women. But if you want to heal this nation right now — my party, yes, but our nation — this sure is a hell of a way to do it.

Right. And Fat Man was a hell of a way to encourage urban renewal in Nagasaki.

Look at the vast wasteland of American politics right now. How can any honest person claim that women make anything better?

And, although I’m normally about as sensitive as a cinderblock, if I hear that pompous “person of color” phrase again, I swear I’m going to punch something hard enough to get my name in the police blotter.

Aim for the throat

So, let us not choose on the content of character but instead focus on the color of skin? How CHAZ/CHOP of them!

I thought the historic moment was electing Obama, TWICE. Is someone lying to me?

I thought the historic moment was electing Obama, TWICE. Is someone lying to me?

Smart move by Klobuchar. She was never going to win. If she had stayed in the race, she would have looked like a loser and a racist!

The Michigan Gov is Nixed Also.

Warning: May contain humor or traces of humor.

Sex, and skin, too? Diversity!

Pick Stacey Adams: like Biden, she’s a mile wide and an inch deep. Only she has the value of being literally a mile wide.

Joe Biden better start moving around or Democrats might mistake him for a statue and tear him down!

No need to remove yourself Amy; just do like Governor of Virginia Ralph Northam did and put on some Black Face.