Jobs are Returning: Unemployment at 13.3%, Payrolls Rose by 2.5 Million

Jobs are Returning: Unemployment at 13.3%, Payrolls Rose by 2.5 Million

CNBC noted that the payroll gain in May is “by far the biggest one-month jobs gain in u.S. history since at least 1939.” 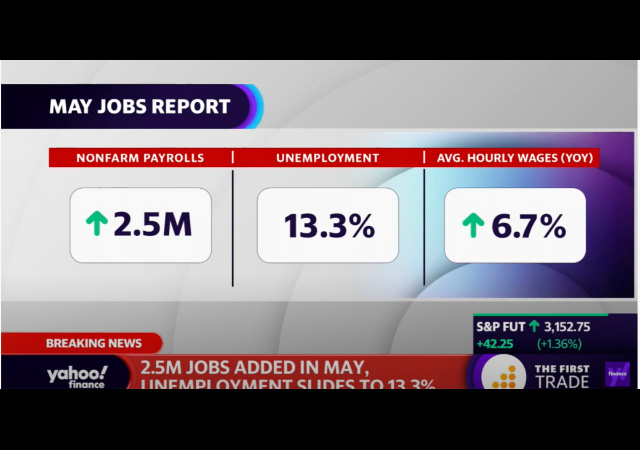 That sound you hear is all the jaws dropping to the floor!

The May jobs report came out much better than expected. Unemployment hit 13.3% while payrolls went up by 2.5 million.

The big jump in payroll indicates jobs have come back. This makes sense since we saw a “2.7 million decrease in workers who reported being on temporary layoff” the other day with the unemployment claims report.

CNBC noted that the payroll gain in May is “by far the biggest one-month jobs gain in u.S. history since at least 1939.”

States have started to reopen as the Wuhan coronavirus pandemic winds down.

We see this in the report since “leisure and hospitality workers made up almost half the increase, with 1.2 million going back to work.” The bars and restaurant sector rose by 1.4 million.

Still, May was probably the nadir for the labor market. While layoffs remained very high, they eased considerably in the second half of May as businesses reopened after shuttering in mid-March to slow the spread of COVID-19.

Consumer confidence, manufacturing and services industries are also stabilizing, though at low levels, hopeful signs that the worst was over.

“The good news is that we probably have hit the bottom,” said Sung Won Sohn, a finance and economics professor at Loyola Marymount University in Los Angeles. “But the recovery will be painfully slow. It will take years, probably a decade to get back to where we were at the end of last year.”

Unfortunately, the riots in response to George Floyd’s killing could keep the economy growth at a slow pace.

Many businesses prepared to open up. But due to looters and rioters destroying private property, some decided to board up and delay openings.

Models based on past unemployment are unreliable. Today’s “unemployment” is as high as it is because the government is paying many people an above-market wage to be unemployed, and because government is keeping many businesses closed, not because of a fundamental breakdown. H/T Instapundit.

Still too soon to know what the real numbers are and where they’ll go.
Millions were kept on the payroll due to the PPP instead of appearing on unemployment. Once that runs out we’ll start and businesses get to see how this effects them longer term and we’re not there yet.

Were the economists who predicted higher unemployment, the same guys that Modeled the CV19 Mortality Rate?

notamemberofanyorganizedpolicital in reply to MattMusson. | June 5, 2020 at 2:40 pm

Yes, of the same KKKlan.

notamemberofanyorganizedpolicital in reply to Whitewall. | June 5, 2020 at 11:29 am

There is Lots of pent up demand.

People have been saving lots for a fourth of the year now.

President Trump said that and is correct again

The jobs number are incredible.

As America celebrates, the Democrats and the media are depressed.

Trump was losing when unemployment was 3.5%.

Last week, everyone seemed to be asking how the Dow could be rising while cities burned and the lockdown dwindled.

I guess now we know the answer.

Perhaps now we can be cautiously optimistic about the economic recovery? (At least until we see what the Dems have planned next.)

I don’t think investors had some magic insight into the coming jobs data as every major firm was forecasting unemployment to be in the 18-20% range. I really believe markets have been driven by hope, TINA and FOMO.

I now appears that this hope was warranted.

This is exactly why the Dems and their Leftist media cohorts need the riots – We are going to see the fastest recovery in history over the next five months. It won’t come back fully, but it will show monthly and quarterly records as well as new records in the stock markets.
.
These figures will be compared to Obama’s recovery that will show Trump doing in 5 months what took Obama seven years to do.
.
While this is going on, Biden will be going to more events trying to woo back the sheep.

The election is probably going to hinge on millions of “swing voters” in MI, OH, PA, WI, and a few others, the ones who voted twice for Obama and then for Trump. I doubt many of them are happy with the riots.

And Slow Joe keeps spitting them out of the ball park.

This is bad news for Democrats. I wonder if the media is going to carry this as hard as the layoff numbers March through May??

notamemberofanyorganizedpolicital in reply to mailman. | June 5, 2020 at 12:20 pm

And will they cover the massive class action lawsuits they (MSM) are soon to be hit with?

Why Don’t They Donate To Small Businesses That Were Looted?

Trump was losing when unemployment was at 3.5%.

With the entire economy having been shut down for 4 months, it sure is. Is that you, Barack?

“The good news is that we probably have hit the bottom,” said Sung Won Sohn, a finance and economics professor at Loyola Marymount University in Los Angeles. “But the recovery will be painfully slow. It will take years, probably a decade to get back to where we were at the end of last year.”

Just asking, but is this from one of the economists that were predicting eight million lost?

What his communist Chinese paymasters told him so.

Well…there go any hopes of lock-down being lifted in democrat controlled states.

With Trump, all things are possible

We will lkikelybhave to wait until August before we know what the true employment numbers were for May, 2020. Furloughed workers would not appear on the unemployment rolls, as they were still being paid by employers through PPP loans. Small business owners, who do not pay themselves a salary do not appear on the roles. There was also a significant backlog of unemployment compensation claims through out the month of May, which may drive the unemployment numbers up later. And, an increase of 2.5 million jobs, when we had a loss of 28 million is less than a 10% recovery. On the flip side, the end of the increased unemployment compensation payments will like drive more workers back into the ranks of the employed. Also, as more businesses open up and workers are recalled, we will see employment figures go up.

The problem with predicting any recovery is the fact that their were organized forces at work which are determined to continue the destruction of the American economy. This report is supposed to be a feel good get well card to the American economy. It does not mean that the economy is recovering at a significant rate. We’ll just have to wait and see.

One more thing. Get ready for another big drop in the DOW, down to the 23,000 – 24,000 range in the next week or so. It is being artificially driven up and profit taking is sure to take place shortly.

“Unfortunately, the riots in response to George Floyd’s killing could keep the economy growth at a slow pace.”

As planned, of course. If the economy recovers before November, then the Bad Orange Man might be re-elected. Can’t have that. As AOC might say (if she actually knew anything), “America delenda est!”

Remember when the liberal hysterics and their press lackeys were giddy with the stock market crash at the pandemic’s beginning?

I said I believed in this President and his economy. I took every last penny I had and “bought America.” I hope you, my follower friends, took my advice

Upon hearing the news; Nancy the Wicked Witch of the West, looses oaths not uttered in an age, suddenly melts like a pint of twenty dollar ice cream dumped in a hot rhinoplasty saucepan.

The good witch, star upon her brow, turns east as the sun boldly rises.

notamemberofanyorganizedpolicital in reply to Tiki. | June 5, 2020 at 2:31 pm

I heard that clip also.

I can read it for you

Feral Donald put them in another “Heads I win; tails you loose.”

Amazing how just publicly aiming for what’s simplisticly good for the people out there short-circuits so many of the anti-people’s plans. It’s like they’re not on our side.

Donnie Orange, Mary Chastain, and others should ensure they do not injure their arms with the backpats. Those numbers are very superficial and propped up by the PPP money.

The economy has serious problems that were manifesting before the shutdown, a number of indicators told us that including the Cass Freight Index, heavy truck deliveries, PMI, manufacturing levels, auto loan delinquencies, an inverted yield curve, etc.

Banks have locked down on lending activity and are backing out on loans they had previously committed to but not contracted to make.

Some of the better news I have read is that consumers have paid down credit card debt and not run it up. That is good news because all the debt levels from sovereigns to corporate to consumer have been astoundingly high and problematic.