Residents of this San Diego suburb demonstrate who Americans really are. 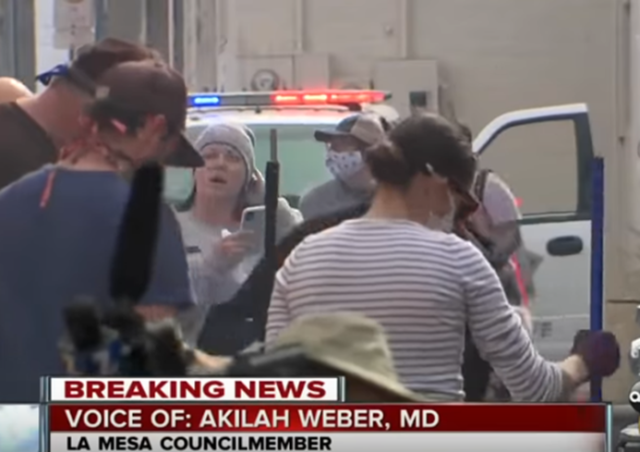 I spent the better portion of Saturday night listening to the distant wailing of police sirens responding to a protest in a community not far from my current home.

I lived happily in the La Mesa, California, area for several years before my marriage. It is a beautiful community and very special. Its quaint shops and attitude reminded me more of the Mid-West, from which I come. I had often gone there to shop, as well as to enjoy its Oktoberfest and special Christmas events.

Therefore, my heart was broken into a thousand pieces when I woke up on Sunday to read it had been burned and looted during riots dressed as race-based protests.

Video showed dozens of people, many of them wearing masks, running in and out of stores in a shopping plaza on University Avenue. Looters were seen leaving Vons with items from fans to alcohol bottles as an alarm sounded. Graffiti covered nearby walls. Others smashed the windows of Play It Again Sports, where looters ran out with dumbbells and baseball bats. At Sally Beauty, a cash register was repeatedly smashed as people left with hands full of products.

A Chase bank and a nearby Union Bank were burned to the ground, the San Diego Union-Tribune reported. La Mesa officials declared a curfew from 1:30 a.m. Sunday until 7 a.m., and Mayor Mark Arapostathis has asked for state aid, the newspaper reported.

It is essential to keep in mind that the Chase Bank in La Mesa is a cornerstone of that community. Additionally, one of my best friends has his office across the street, and their offices were endangered during this bacchanalia of progressive destruction.

I also shopped often at this Vons.

BREAKING: Looters have broken into the Vons at the La Mesa Springs Shopping Center in California. @nbcsandiego

The grocery store closed at 8 pm in anticipation of this. pic.twitter.com/IdTilPGCEd

However, the next morning, the community of La Mesa and neighboring areas came together to clean-up the destruction.

The La Mesa community joined Sunday to help clean up La Mesa Village downtown after a night of looting and arson, with roving bands of looters smashing windows, torching businesses and eluding police.

A crowd of rioters estimated to number as high as a thousand blocked Interstate 8 in both directions. What began as a demonstration escalated to vandalism and looting by nightfall, authorities said today.

A cleanup of downtown, organized by the Public Square Coffee House at 8278 La Mesa Blvd., began at about 9 a.m. Sunday with hundreds of La Mesa residents arriving with brooms and paint, owner Aaron Henderson said.

“They cleaned up in about an hour,” Henderson said. “It was overwhelming to see this community come together.”

All the graffiti was cleaned up and store windows were boarded up, Henderson said.

Meet at Vons in La Mesa. Tons of us here to help clean up the glass & debris from last night. pic.twitter.com/ItUMrRWNTl

The scene in La Mesa this morning: three buildings (two are banks) have been destroyed by fire. Community members are coming together to start the clean up. A lot to take in after protests turned to vandalism last night. @10News pic.twitter.com/3VwViJW1Nx

Here’s our community La Mesa CA coming together to clean up the mess from the rioters and looters. I have nothing against peaceful protests. I love this city. pic.twitter.com/mugLz6ZRks

I would like to commend the great people of La Mesa for this example. This is who Americans are.

And they will still vote Democrat

I am so done with these people

How about every time a white person is murdered by a black, illegals, we move Into the streets and start stealing and kicking peoples heads in?

I have to say I’ve had little sympathy for what’s happening in the big Dem controlled cities.

What little I do have is for the people who didn’t vote Dem and who for one reason or another are stuck living there until they can find a way out.

La Mesa begins eastern San Diego county. The mall mentioned is technically in Grossmont area. This is a much more conservative area, much more Christian.

East County SD was one of the targets of the HRC when they lost Prop 8. (Of course the loss didn’t matter–the courts undid it). Christians voted for traditional marriage. Atheists like to put up billboards in that area (and long the 94 East out towards Spring Valley) saying “You know it’s not real”, next to a picture of the creche at Christmas.

East County definitely DOES NOT vote for Democrats.

You need to remember there are a lot of conservatives still in California. Motor voter and vote harvesting have destroyed our elections here, along with our “jungle primary” that makes it impossible for a Republican to win statewide office.

That is how we got Kamala Harris as a Senator; she and Loretta Sanchez were the only two candidates on the general election ballot, the Republicans being knocked off in the “jungle” primary. It was a choice between Willie Brown’s little call girl or the stupidest woman in California. I chose the latter, because stupid is preferable to evil. (There’s no None Of The Above” option.)

Please pray for us in California.

“Please pray for us in California…”

Prayer is good. But “God’s work must truly be our own.

– JFK, in his inaugural address.

Remember, the people don’t get what they vote for. They get what 50%+1 vote for – but good and hard.

While I sympathize with turning your back on the progressive communities, I will gladly stand with folks like this to resist the violence.

Where were the police????? What happened to camera footage?? Who took down license numbers??? Who cares???

I lived in the area back in my college days. If things are still like they were, the police seek revenue, and they seek people to jack up about minor nonsense, while ignoring real crime. Revenue, and “able to go home to [their] family” each day comes before their job.

Traffic cops annoy me – sit in a fixed location and man the radar gun – cite people not doing the speed limit. That the car I finally was able to pass had impeded a long line of cars from doing the speed limit for miles – and when finally it opened up a passing lane and sped up to prevent others from passing – well the cop didn’t see that because he was hiding behind a ‘proverbial’ bill-board down the road. How often do they ride in an unmarked car in traffic to catch and cite that kid of thing? Rarely – because it’s not as easy and lucrative as hiding out and using the radar gun approach.

I’ve often wished cops were held accountable to a standard – that required them to apportion their time – and limit the amount of city/county funding that could be collected from traffic/ordinance enforcement. Or move to a point system and away from a cash-penalty system. I don’t have much respect for what I consider a petty and punitive approach to policing the mostly law-abiding public.

Well, the idea is to protect the Brownshirts, isn’t it, slave?

And what happens when and if they come back tonight or tomorrow night and trash the same or a nearby area? Clean up, in the absence of protection does not stop insurrection.

That is why looters should be shot on sight.

In the old days, they would have been. It’s a sign of how far gone we are as a nation that looters are not only allowed to live, but are released from jail in vast numbers, either because of bail reform or crooked AGs.

San Diego dodged a bullet in 2018 when the Soros AG candidate went down in flames. Otherwise, it would have been the city in flames this past week.

Where were the police during all of this?

Taking a knee along with the new National Guard

Stood down. By order of the terror-masters in the democrat party.

Start with soros, work down to bezos, gates, zuckerberg, norman lear, etc – just keep following the terror money, and start locking them up.

Amazing the damage obama and sessions did to our nation.

Find a place when the right didn’t clean up after the disgusting left. NArches rallies don’t care try to find one.

I’m touched. They let the looting proceed, without doing a thing. Next day, they cleaned up the glass.

This is impotence, and, perhaps, stupidity.

Instead of community, I see little people who will get kicked around until they hire a Cajun gunslinger and the six bad men he will bring with him to really clean up the mess.

Yeah, these communities need to STOP VOTING FOR SHITE “leaders”…

“What began as a demonstration escalated to vandalism and looting by nightfall, authorities said today”.

Peaceful protest my arss, it is a diversion that precludes the looting.

People at the top have to face prison, or we are doomed.

Don’t let the media and others who would divide us lure you into that trap.

So it went to neighborhoods down there?

Wow- that would have gone badly on my street.

Oceanside, another small town in San Diego County, is next, with a “peaceful” protest scheduled for Sunday afternoon.

Oceanside must have changed from what it was in 1966. I remember the midnight showing of The Sands of Iwo Jima when everybody stood and sang the Hymn. We were invincible then. It was a town that if you didn’t want people asking you to to take Christmas or Thanksgiving with their family, you better stay on base. It was that kind of town.

Oceanside went from a conservative, military town to a gang-infested rat hole (in the 90s/2000s). Now Oceanside is being “redeveloped” with restaurants and shopping around the beach area. The property values are going up and it got too expensive for the gangs: they’ve moved to Temecula.

BLM/Antifa and every other political idiocy will find support in Oceanside. The schools are PC/Common Core and lousy.

That will teach em. Come back and we’ll clean it up again. If you wonder how we got here.

I’m sorry Leslie, but instead of cleaning up after them, I think it would have been more moral to hunt down the animals who did this and bring them to justice. No, I never believed in “turning the other cheek”.

Or, gathern them up at gun-point and make them do the cleanup, all the while being watched by a gun-toting old salt or old leatherneck with a bad mood and a short fuse.

You yahoos do realize that the GOP and Democrats colonized all of California with third world immigrants, right? It’s the same thing being done to places like Idaho right now. La Mesa, Lemon Grove, El Cajon were all lily white 40 years ago. In one generation it flipped Democrat. Next is Texas and Florida. All of flyover country will be next.

So, we’re a bunch of yahoos? Let me guess: you teach at Harvard.

The climate changers can’t be happy, all these toxic fumes going unfiltered in the air can’t be good.
They need to speak uo.

The climate changers are the looters today.

Bezos just gave them 10 billion dollars. He should hang.

They remind me of the democrat media people who wiped obama’s behind every time he crapped on himself.

Leave the crap in the street. Let reality sit in.