They dragged the statue 200 yards to throw it into Byrd Park lake. 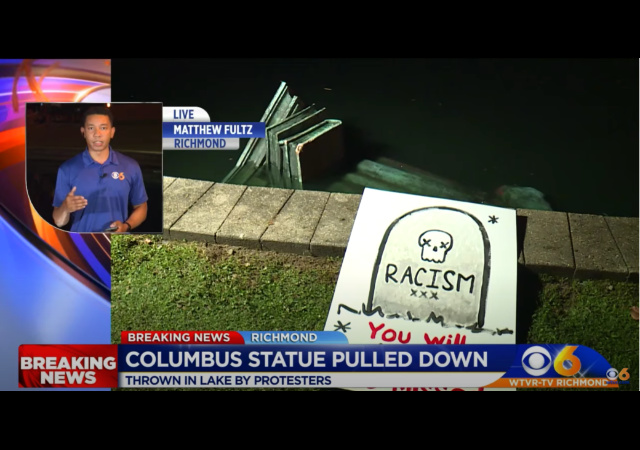 The death of George Floyd has reignited the obsession with removing statues of those with unsavory pasts.

Protesters tore down the Christopher Columbus statue in Byrd Park in Richmond, VA. They then threw it into the lake.

At Tuesday’s protest, activist and founder of Marijuana Justice Chelsea Higgs-Wise reminded attendees that, amid these discussions, “We have to start where it all began – we have to start with the people who stood first on this land.”

A few protestors stood at the base of the paint-spattered Columbus monument. “This land is Powhatan land,” read one protestor’s sign. Another: “Columbus represents genocide.”

After about seven speakers, the crowd began to march down Arthur Ashe Boulevard, chanting “take it down.” Less than two hours later, they did just that.

Upon returning to Byrd Park after the march, protesters used ropes to pull down the approximately 8-foot statue, then moved it some 200 yards across the road at the Arthur Ashe Boulevard entrance and submerged it in Byrd Park lake.

BREAKING: The Christopher Columbus statue has been pulled down at Byrd Park and thrown in the lake. @CBS6 pic.twitter.com/TtNMABgbyS

Pic of the statue in the lake pic.twitter.com/AfayVPWvSZ

Interesting how much goose-stepping, jackbooted Dhimmi-crat totalitarian thugs have in common with the Taliban and other Muslim jihadist jackboots, seeking to destroy all people who reject their orthodoxies, as well as any objects which they deem as an affront to those orthodoxies.

The ugly face of totalitarianism in America, today, is the face of a Dhimmi-crat zealot.

I was going to suggest they “do Muhammad next”; they have no statues to destroy, of course, but they could protest outside of some mosques, screaming of the unsavoriness of everyone’s most famous child-diddler and sex-slaver.

But we all know that’s not to be on the agenda, because the agenda is not about truth or justice. It is about sadism and feelings of control, power.

Muhammad was a barbarian, who murdered, looted and raped women and children as young as 9. And then he created Islam to cement his power. One has to be a special kind of stupid to by Islamic rubbish.

I pose a simple question — where were the local police, when these jackboots were pulling down the statue? This is an act of destruction that takes a long time to accomplish. Hence, ample time for police to arrive, and, to arrest the criminals responsible. So, are Dhimmi-crats in such control of Virginia, now, that the police are told to stand down when public property is being destroyed? It would appear so. This is some sad state of affairs, for a once-great state.

To ask the question is to answer it, yes?

this only happens where the local government is complicit and wants it to happen, just like Antifa taking over parts of Seattle.

These ARE the new police.

Defunding (getting rid of) the current, traditional police force is only half of their goal. They want to REPLACE them with exactly what you see here – BLM and Antifa thugs with guns & immunity.

THEY are what will be “policing” the rest of us, just like they are now…except they’ll have true legal authority over us. Don’t think it can or will happen? Look around you…was any of this believable a year ago? Five years ago? Ten?

notamemberofanyorganizedpolicital in reply to Jefferson Alexander. | June 10, 2020 at 10:24 am

“Every record has been destroyed or falsified, every book rewritten, every picture has been repainted, every statue and street building has been renamed, every date has been altered. And the process is continuing day by day and minute by minute. History has stopped. Nothing exists except an endless present in which the Party is always right.” –George Orwell

Renamed from North Boulevard, it is where the Ball Diamond is located. .
Arthur Ashe was from Richmond, they were going to.put his statue down on Monument square, but I lost track whether it was ever done.

“ Above all, during and immediately after the struggle the workers, as far as it is at all possible, must oppose bourgeois attempts at pacification and force the democrats to carry out their terroristic phrases.

“They must work to ensure that the immediate revolutionary excitement is not suddenly suppressed after the victory. On the contrary, it must be sustained as long as possible. Far from opposing the so-called excesses – instances of popular vengeance against hated individuals or against public buildings with which hateful memories are associated – the workers’ party must not only tolerate these actions but must even give them direction.” – Karl Marx

It’s well past time to start shooting these looters and anarchists.

Flame throwers are out?

Byrd Park is not very big and not really located near areas that I would consider to be , ” protest ” areas .The story made it sound as if it was not a large group
I suspect more of a stealth operation of a small group.in and out quickly .
I would.imagine the police were busy elsewhere.

For years, references to ‘1984’ and ‘civil war’ seemed like paranoia.

It’s gonna be hell if Trump wins – or, if, god forbid, he loses.

Between a rock and a hard place = the horrific new normal.

I am a quarter Native American, and at one branch of the family wallows in self pity, while milking welfare.

People have a choice, in my case I chose to embrace education, and I have a strong work ethic. I never inherited anything, but I did become prosperous.

Most certainly, my native grandparent suffered, lived in poverty. It is a fact that Native Americans were worse off than slaves.

Still, it is stupid to live disreputable, useless lives, when through hard work one can succeed, and ensure that their children succeed.

That is the choice I made, there is no acceptable excuse for those who do not do well for their children.

bet they all think colunbus actually set foot on the land we’re on.

They dragged the statue 200 yards to throw it into Byrd Park lake.

Probably the most exercise they’ve had in years.

Aside from throwing bricks through windows.

Anyone know a retail store where I can still buy a shotgun? Only 10 percent kidding.

Do not miss the real target here — George Washington.

I shall explain. Going after statues of Robert Lee and other Confederate war persona was the start point, because after all, you can browbeat people into believing that these old generals were defending slavery, and how can anyone defend that?

It then moved to going after statues of other 19th and early 20th century persona who likewise were guilty in the present-day of wrong-think. Again, the organizers of this were preparing the battle-space.

Now go after Columbus. He’s been a target for a while and now is the time to tear him down. He’s the person who opened the western hemisphere to European exploration (per the Left, exploitation, colonization, and genocide), so going after him attacks the very legitimacy of western life in the new world.

Washington is next. Why? He’s the ‘Father of the Country’. Tear him down and the protesters will succeeded in making the founding of the U.S. illegitimate. That’s the end-goal here; once the protesters have done that it’s easy to bring the country down as a whole.

To destroy a country you must make the country’s existence illegitimate. The protesters will go after George Washington next — book it.

The Columbus stature in Boston’s North End was beheaded last night. They found the head so hopefully it will be restored.

Update from Boston. The CC statue is being taken down and moved to storage.

According to our way in over his head Mayor:

“We are going to be taking the statue down this morning, putting it into storage to assess the damage of the statue.”

“Given the conversations that we’re certainly having right now in our city of Boston and throughout the country, we’re also going to take time to assess the historic meaning of the statue”

You’ve had 500 years for crying out loud.