“Nothing exists except an endless present” 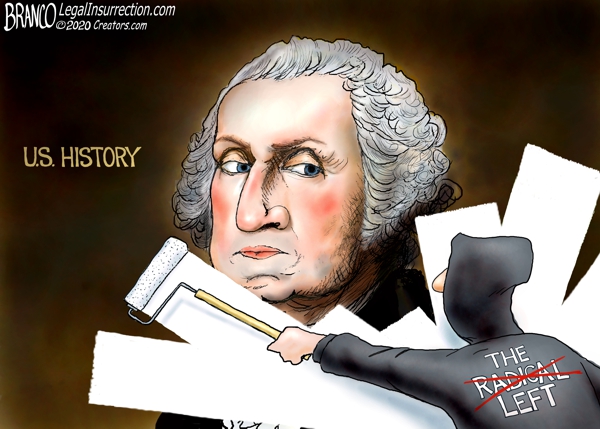 I wonder if the left would remove a Stalin statue, or a Mao statue? These are heroes to the left, their regimes and power is what the left are after.

I wonder how much longer we have to wait till the left, and it IS most of them, as Branco noted, start pushing to rename Washington DC due to the offensiveness of Washington’s name.

Rewrite history, as the left have done, and et voile, the evil history of Democrats is white washed, and their deeds are blamed on Republicans.

So the left think by trying to erase history, they won’t be subject to repeat the past?

…in which the Party is always right.

The second half of the quote deserves it’s own cartoon. Just change “Party” to “Left”.

I would have added a Kente cloth around the neck just to further illustrate their ignorance of history as they seek to enslave the American people.

notamemberofanyorganizedpolicital in reply to legacyrepublican. | June 18, 2020 at 11:12 am

Kente cloths are of an African enslaving and slave trading tribe.

“The Asante supplied British and Dutch traders with slaves in exchange for firearms, which they used to expand their empire.

Slaves were often acquired as tributes from smaller states or captured during war. Some slaves were brought across the Atlantic whiles others stayed in Africa to work in gold fields.” – USA Today

While we’re destroying statues around the country let’s prepare ourselves for the destruction of Mount Rushmore.

Can’t have a memorial to old dead white men who were slave owners….or worse, i.e., Lincoln in Boston.

The American Taliban will never stop until every bit of public art in America is gone from sight.

With each passing day we see more and more the left practicing the techniques of the Muslims. Here, Branco shows the left attempting to wipe out American history and tradition. That is, removing from memory that which went before (the period of ignorance, Jahiliyyah) and enabled us to become what we are today.

This idea of wiping out the past of other cultures is a disgusting practice of Muslims. Lots of examples could be given. I’ll just mention two. Erasing through denial Jewish history from the Holy Land, with the building of the Dome of the Rock mosque on Temple Mount, the very spot where Solomon’s Temple had once stood as a raw punctuation. The Taliban’s destruction of the Buddha statues in the Bamiyan Valley (2001).

Muslims practice destruction because destruction is inherent in Islam. No matter when in time over the last 1400 years, and no matter where in the world, Muslims destructive behavior has been consistent.

So too the left. If something comes from the period of Jahiliyyah (period of ignorance) is can and must be destroyed.

great quote in this morning’s Epoch Times newsletter that seems fitting in these trying times.

I’m starting with the man in the mirror
I’m asking him to change his ways
And no message could have been any clearer
If you want to make the world a better place
Take a look at yourself, and then make a change

It is terribly hard to consciously make changes in our lives, especially after we have been repeating the same behaviors over and over for lo these many years. Change can happen but only with constant repetitive motions, actions, or words and it takes time. Too much time for some and they quit trying to change. Some are immune to the frailties of the human condition and are quick learners. They are a very small percentage of our population though.
My personal experience is that the Holy Spirit is the best teacher and bringer of change…and it has worked for lo these many years.

They are renaming them Uncle Adolph’s Rice and
Aunt Adolpha’s Pancake Mix.

So where do we stop, every president up to Lincoln because they were slave owners or enabled slave owners to exist until the 1860’s, do we eliminate everyone since so called systemic racism still exists. That might not go over well since that would include Obama.

Notice how Branco got the White BLM rioters part right.

People used to snicker when you warned them there was a chance this day was coming.

His next illustration should show an AR16 barrel coming up to the ‘painter’s head.

You can’t change or cover up history, you can only learn from it. Only idiots would try to make previous generations, who had their own mores at the time, conform to what is appropriate today.