Biden: ’10 to 15 Percent’ of Americans are ‘Not Very Good People,’ But ‘Vast Majority’ are Decent

Biden: ’10 to 15 Percent’ of Americans are ‘Not Very Good People,’ But ‘Vast Majority’ are Decent 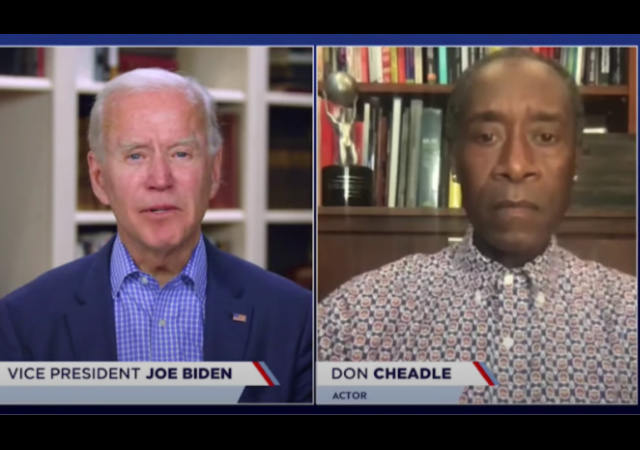 Remember when failed presidential candidate Hillary Clinton said half of Trump supporters belong in a basket of deplorables?

Well, Biden almost had a similar moment. He said 10 to 15% of Americans are “not very good people.” But you have to look at the whole statement because I refuse to slice and dice his whole comment.

Second, he said the “vast majority” of Americans “are decent.”

“The words a president says matter, so when a president stands up and divides people all the time, you’re going to get the worst of us to come out,” Mr. Biden said during the discussion, which was moderated by the actor Don Cheadle.

“Do we really think this is as good as we can be as a nation? I don’t think the vast majority of people think that,” the former vice president said. “There are probably anywhere from 10 to 15 percent of the people out there that are just not very good people, but that’s not who we are. The vast majority of the people are decent, and we have to appeal to that and we have to unite people — bring them together. Bring them together.”

If they acknowledged it they wouldn’t tax us to death and have so many social programs. They cannot accept the fact that so many of us Americans give a lot of money to charities and always willing to help out our neighbors.

Biden admitted that the hate did not “begin with Donald Trump,” but he also claimed that Trump’s rhetoric has driven apart this country.

Trump’s rhetoric doesn’t help. But we have been a divided nation for quite a while. It’s just more apparent with social media.

Plus, President Barack Obama used some pretty divisive rhetoric. He is just more eloquent with it.

But to ignore the fact that we were divided during the eight years under Obama is just stupid:

“I thought we had made enormous progress when we elected an African-American president, I thought things had really changed,” he said. “I thought you could defeat hate, you could kill hate. But the point is, you can’t. Hate only hides, and if you breathe any oxygen into that hate, it comes alive again.”

“Joe, could you put what you saying into a Venn diagram?”

Joe do those people who go to Communist China bringing your family Billion$ in Dollars back and go to a fake job in the Ukraine earning thousands and thousands a day fit in that category?

Mary is right – it is all context.

But the context is Joe Biden.

If I were Joe Biden and had a son that got kicked out of the military for doing crack, married his brothers widow and got a stripper pregnant, I would not start talking about the 10 to 15 percent of Americans that aren’t good people. but you do you joe ….

Venn do you vant him to do zatt?

notamemberofanyorganizedpolicital in reply to Mark. | June 6, 2020 at 3:32 pm

The sentiment wasn’t unique to just them….

That’s the game: trash talk to dimish the office when the opposition is in, and when he’s out, become a diaper to the dumbass fascist you get into office.

Trump won the presidency – and kicked Jeb! Bush’s ass – by trash talking back.

So now, the leftist strategy is to criticize PDJT for successfully beating down the left.

Lesson: ignore EVERYTHING the left says. Every word, every utterance has a calculated purpose to destroy.

The democrat party is a party of fascism – and fat.

He doesn’t identify how much of that 10% to 20% is made up of Democrats, but I have an idea that there are more Leftists than Conservatives in that number.

I apologize for being too lazy to dig up the source, but I did read somewhere that the degree of racism/racial tension (however it is defined and/or measured) increased dramatically during the eight years of the Øbama presidency.

Come on – Did you really have to read it somewhere?

“There are those…” not divisive at all.

Of course, now that he’s far enough away to not really be held responsible for anything, President Present is community agitating again.

Or was that inflammatory rhetoric? Not, you know, inflammatory, torches, lighters or accelerants, but sure, let’s talk about how uncomfortable it is to call things as they are.

I’m surprised he formed a paragraph together without losing it.

Probably did but it was edited

“Don, did you ride in on that jackass horse face pony dog soldier , you ain’t black enough “?

You are fun. Humor is the best medicine. Please post more stuff.

The vast majority of American politicians are amoral, filthy liars with law degrees.

A corrupt politician like Biden sitting in Christ-like judgement of the people he supposedly serves.

The democrat party landed gentry. Wearing affectations of superiority and powdered wigs. Our betters. Passing judgements on us, their simple-stupid chattel.

Two morons in the mug shots above.

In breaking news, it turns out defense secretary Esper is a rat:

Pentagon disarms guardsmen in D.C., in signal of de-escalation
https://www.thetelegraph.com/news/article/Pentagon-disarms-guardsmen-in-D-C-in-signal-of-15320290.php

Million protesters scheduled to be bused into DC this weekend:

There’s a violent coup in the works, folks. This is it.

The number is 21% and they are all registered Democrats.

I didn’t realize that ANTIFA is 10% of the population.

No it’s not! Antifa does not exist, NYT told me so

No, but it is at least 10 % of the population of college campuses.

Not sure if this link will be live, but you can cut and paste.

Gee, do I detect a pattern here?

Must be all of those White Supremacists the liberals keep talking about.
They’re EVERYWHERE from what they tell us…

Joe finally admits 10-15% of the left are bad people.
Finally!

And they’re all Democrats, Joe.

The other two on the broadcast just sat there, not sure if they were in a state of shock or believe it as well.
They didn’t ask him what “not very good” means, who falls into this group of not very good people.
Just another two sheep I guess.

DJT is just responding to the chasm caused in civil society by the leftward movement of so-called liberals. It’s the liberals who have moved leftward (or, rather, moved leftward more rapidly than Republicans), and it is that movement (and the rhetoric that accompanies it) that has divided the nation. No person should be faulted for speaking out against the movement because such speech resists the division. The only people it “divides” are those who have already removed themselves from traditional American culture and values. We can already see that the left doesn’t want us “closer,” they want us “the same.” They engage in no real conversations nor in actual arguments. They dictate. Their position is 100% ideology and zero reality. They brook no dissent. If the only way for conservatives to heal the divide is to join the left – forget unity, it’s not going to happen.

There are three ways for two parties to rip something asunder: 1.) A and B pull together against the middle; 2.) A pulls against B; and 3.) B pulls against A. Only one of the latter two is in operation in this country, and it’s the left that’s doing the pulling. You’re asking people whose values haven’t changed to take some of the blame for the division in our country. You ask too much.

Racist Joe says that ~ 13% of the population are “bad people.”

Often I’d have to give that sentiment an Amen. The man has made me cringe mightily a bunch of times. I think “Come on man” run some of these controversial topic twits by a thinker like Steve Bannon or Mark Levin etc. It’s hard doing it alone Donald. You’ve got a lot on your plate. Form a kitchen cabinet. Sit down with these guys do some give and take with these guys and you’ll end up being better prepared to tweet.

That being said, I have given Trump infinite grace because we finally have a GOP President that doesn’t take it lying down.
Responding to being slandered and slimmed constantly by the
MSM (say around 90% of all media) was beneath the dignity of
Bush I or II. Bush I became a one term president and II left with approval ratings in the low low 30’s at best. Any questions?

MSNBC just hired Lisa Page, I guess they are trying to match CNN with Brennan and Clapper

I wonder if Joe has 10-15% of normal brain function remaining? Didn’t think so.

They cannot accept the fact that so many of us Americans give a lot of money to charities and always willing to help out our neighbors.
————————-
Liberals weaponized non profits and charities too. They’ve become not much more than economic engines for high salaries to party members and political entities of the democrats.

So be careful where you give. There are still plenty of small organizations that have no paid staff and every dollar you donate goes to their good works. Or slightly bigger organizations that have paid staff who are dedicated to their work and do it honestly and justly. Find them and give to them. Let the big SJW-controlled groups get their donations from the foundations.

Barack Hussein Obama, who did absolutely nothing for the black community for 8 years, is pretending like he cares again, tweeting from his 20 million dollar mansion in Martha’s Vineyard.

The truth is getting exposed DemRat DC mayor coordinated out of town #AntifaTerrorists to loot and burn down their cities. People are waking up to their corruption.

TheFineReport.com in reply to notamemberofanyorganizedpolicital. | June 6, 2020 at 6:13 pm

Think about it: he did do something. He sentenced them to crumbs from a dying society.

Joe doesn’t mean these because it would implicate him….