Steven Lopez had many confrontations at the month-long protest and a previous arrest. 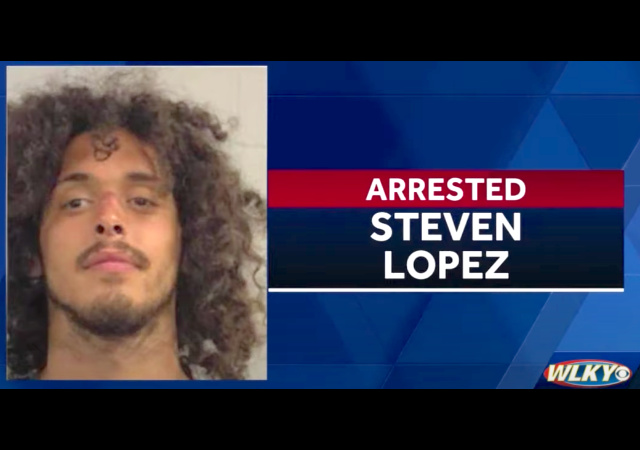 Authorities have arrested Steven Nelson Lopez, 23, for allegedly killing Louisville photographer Tyler Gerth. They charged him “with one count of murder and one count of wanton endangerment first degree.”

Louisville, KY, has seen protests for a month after the death of Breonna Taylor.

The protests have been mostly peaceful but took a deadly turn on Saturday:

Lopez, who had been camping at Jefferson Square had been asked to leave earlier in the day by other protesters for his “disruptive behavior” Mayor Greg Fischer said during a press conference Sunday afternoon.

According to an arrest report, LMPD [Louisville Metro PD] officers notified MetroSafe of multiple gunshots fired in Jefferson Square Park around 8:59 p.m. Officers responded on scene at this time to find a victim suffering from an apparent gunshot wound.

The victim was found unresponsive lying in the middle of the park near a concrete wall.

Lopez, according to the report, was seen shooting a firearm into a large crowd of people at the park. The gunfire struck the victim, later revealed by the coroner as Tyler Gerth.

Gerth was shot in the head and pronounced dead on scene by officers.

Lopez was identified by multiple witnesses at the scene, and observed in video surveillance shooting the handgun into the crowd, where according to police, he was showing “extreme indifference to the value of human life and creating a substantial danger of death or serious injury to others.”

While the suspect shot into the crowd, other bystanders returned fire to protect their life and the lives of others. Lopez sustained a non-serious injury from a gunshot wound to the leg during the crossfire.

Lopez was taken into custody on scene without further incident and transported to the hospital.

Maxwell Mitchell, another protester, said that “Lopez fired at least two shots into the air before he shot toward the encampment.” He explained that “Lopez had an altercation with another person” on Saturday, but not Gerth. He believes Lopez targeted someone else and not Gerth.

Officers arrested Lopez and 17 others on June 17. They charged him with inciting a riot, disorderly conduct, harassment, and possession of drug paraphernalia.

Another person said Lopez had many problems with other people in the encampment, which led to “at least three fights at the park over the course of the protests.”

Is Lopez another “white Hispanic?”

No, because he doesn’t have a name that, to a New Yorker such as Al Sharpton, sounds Jewish. Though actually there are plenty of Jews with that name, but they usually spell it “Lopes”. But Sharpton wouldn’t know that.

Hispanic Jews are not really that uncommon, despite the best/worst efforts of the Inquisition. Had an observant coworker whose family came to the Americas centuries earlier. Large number of relatives who were Mexican citizens (he was American) – including some fairly prominent ones such as the head police official for an entire state/province/whatever-they-call-them-there.

Of course, his family name (Rosenberg) wasn’t very Latino sounding, but some cousins had names even Jew-hater bigots like Sharpton wouldn’t be able to guess he should be hating on.

A lot of Spanish families who were called “crypto-Jews” – they were the primary target of the Inquisition – moved to Mexico and other far flung corners of the Spanish Empire, it was the easiest way to get out from under the eyes of those dedicated to finding Heresy.

My people ended up in what is now called Holland.

Be horrorible if these DEM-O-CRAT RIOTS killed so many MSM people that they stopped covering them.

But but but the MSM told us these are peaceful riots and piece full lootings…..

Of course Trump will be blamed by the MSM/DNC axis….

When I heard about this on the the radio over the weekend, that is what was being implied. ‘Man fires into crowd of peaceful protesters…’

A white supremest fires into a crowd of peaceful protesters…

He’s definitely not-white enough to claim some affirmative action goodies. Good for the goose, good for the gander.

Good thing all the protesters “asked him to leave”…if only they had allowed the police to intervene.

“Officers arrested Lopez and 17 others on June 17. They charged him with inciting a riot, disorderly conduct, harassment, and possession of drug paraphernalia.
”

Does Louisville have a Soros-funded DA letting criminals out on no bail? Guy should probably have been locked up until trial.

“Mostly peaceful”? What a BS term. A murderer is mostly peaceful until he kills someone. A man who murders 20 people is still “mostly not a murderer”.

It’s like describing a rape as “a mostly consensual intimate encounter”.

What a total waste of time and life for all of these people.

Fringe news account yet still the same as the MSM, jumping to conclusions

The comments are a cesspool

Everyone should visit that site and leave a polite and respectful message outlining some actual facts. I just did.

Once the anarchists “defund the police,” it will be the wild, wild west. This shooting is a good sample: A guy who’s easily pissed off shoots at the crowd, and several of them shoot back.

If you live in one of these lawless cities, you should learn to keep your friends close, your enemies closer, and your gun closest of all.

“”and several of them shoot back.””

Pity none of them apparently had firearms training.

No, no, no, no, no: it will NOT be the ‘wild west’ – it will be governed by BLM, CAIR and an assortment of other fascist groups.

Arrested on June 17 on very serious riot related charges and yet he was released into a community in turmoil over the riots he was charged with inciting. The young 19 yrs old punk who callously murdered two teenagers on the south side of Chicago was previously convicted of aggravated unlawful use of a weapon; I think he was on probation. 19 yrs old already convicted of a felonious gun crime. This happens so often it’s almost beyond belief. Its sad as helll and liberals aren’t doing the black community any favors by emasculating the police. If they really cared about the blacks on the south side they would increase the police presence in certain areas. Also we have to get after the judges who routinely release gun criminals with no jail time.

“…judges who routinely release gun criminals with no jail time….”

Are you finally starting to connect the dots? These thugs have proven to be ultimately useful, as we are seeing in the rein of terror across our country.

They’ve been useful for decades, helping Dems to promote the “epidemic of gun crime,” gun-control agenda. Without drug-related and gang violence, America’s “gun violence” problem would be nearly non-existent. Gun grabbers have let this violence continue because stopping it would put a huge dent in their anti-gun agenda.

“If they really cared about the blacks on the south side they would increase the police presence in certain areas.”

They don’t care. They have a vision, a self-flattering vision, and the good feelings that vision supplies them with outweigh any consequences others may suffer. Black, white, or any other color, we are all [i]things[/i] they are willing to sacrifice.

Too bad he has that Bozo The Clown hair-don’t…makes it darn near impossible to Photoshop a MAGA hat onto him.