Pompeo also says that China delayed reporting the severity, stockpiled medical supplies, and that the virus is not reported to be genetically modified. 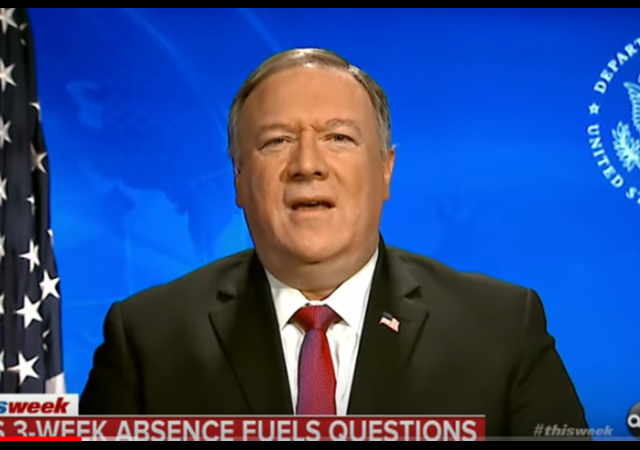 Today’s update starts with a further confirmation that US officials believe the coronavirus came from the Wuhan laboratory facility.

Secretary of State Mike Pompeo said “enormous evidence” exists indicating the coronavirus pandemic began in a lab in Wuhan, China and that the ruling Communist Party did everything it could to keep the outbreak under wraps.

“There’s enormous evidence that that’s where this began. We’ve said from the beginning that this was a virus that originated in Wuhan, China. We took a lot of grief for that from the outset. But I think the whole world can see now,” he said on ABC News’ “This Week” on Sunday.

“Remember, China has a history of infecting the world, and they have a history of running substandard laboratories. These are not the first times that we’ve had a world exposed to viruses as a result of failures in a Chinese lab.”

Secretary of State Mike Pompeo says there’s “enormous evidence” that the coronavirus came from the Wuhan Institute of Virology. He goes on to detail how Communist China poses an ongoing threat to the world and how China refused to take action that would’ve kept the world safe. pic.twitter.com/o00V3xyjqM

Pompeo also asserted that China hid the extent of the coronavirus spread, including concealing the severity.

“You’ve got the facts just about right,” Pompeo told ABC’s “This Week” when asked if China intentionally stockpiled medical supplies in early January while it concealed the severity of Covid-19. “We can confirm that the Chinese Communist Party did all that it could to make sure that the world didn’t learn in a timely fashion about what was taking place.”

Pompeo’s comments come as the Trump administration is formulating a long-term plan to punish China on multiple fronts for the coronavirus pandemic, injecting a rancorous new element into a critical relationship already on a steep downward slide.

Multiple sources inside the administration say that there is an appetite to use various tools, including sanctions, canceling US debt obligations and drawing up new trade policies, to make clear to China, and to everyone else, where they feel the responsibility lies.

…Pompeo added that China “behaved like authoritarian regimes do, attempted to conceal and hide and confused and employed the World Health Organization as a tool to do the same.”

“These are the kinds of things that have presented this enormous crisis and enormous loss of life and tremendous economic loss all across the globe,” he said. “The Australians agree with that, you hear the Europeans beginning to say the same thing, and I think the whole world is united understanding that China brought this virus to the world.”

NEW: Secretary of State Mike Pompeo tells @MarthaRaddatz China “did all that it could to make sure the world didn’t learn in a timely fashion” about COVID-19.

“It was a classic communist disinformation effort,” he adds and they will be held “accountable.” https://t.co/sLSKoZFK1N pic.twitter.com/TFoPQ2Um09

Pompeo was questioned about the virus as well:

“Do you think they intentionally released that virus, or it was an accident in the lab?” Co-Anchor Martha Raddatz pressed.

“I can’t answer your question about that,” he said, “because the Chinese Communist Party has refused to cooperate with world health experts.”

… Pompeo on Sunday agreed the virus was not manmade.

A recent press release from the Office of the Director of National Intelligence (ODNI) that said, “The Intelligence Community also concurs with the wide scientific consensus that the COVID-19 virus was not manmade or genetically modified.”

Pompeo said that he has “no reason to disbelieve” the intelligence community, adding, “I’ve seen their analysis. I’ve seen the summary that you saw that was released publicly. I have no reason to doubt that that is accurate.”

The full interview is here:

I’m assuming that upon hearing this news, Martha Raddatz broke down in tears…

Probably not. Her wall of denial is strong enough to cover up Biden’s grabbing of a girl’s privates.

“Remember, China has a history of infecting the world”

I’m assuming that upon hearing this news, Winnie broke a good deal of crockery.

Genetically modified, weaponized and released intentionally.
As an act of war against the entire globe.

Say it, Mike. Just come out with it.

It sounds like you are suggesting going to war based on accusations for which there is no solid evidence. Dangerous and foolish. Troll. False flag.

Need to change the summary text which reads

Pompeo also says that China delayed reporting the severity, stockpiled medical supplies, and that the virus is reported to be genetically modified.

Since the article says:

… Pompeo on Sunday agreed the virus was not manmade.

A recent press release from the Office of the Director of National Intelligence (ODNI) that said, “The Intelligence Community also concurs with the wide scientific consensus that the COVID-19 virus was not manmade or genetically modified.”

There is absolutely nothing to change.

Not manmade or modified doesn’t mean it wasn’t accidentally or purposely released from a lab.

Whatever the “intelligence” community thinks, you can count on the opposite being more likely.

Three week ago it was “absolutely racist” even to imply that this virus originated anywhere other than an exotic food market. But some of us are old enough and have enough experience that we can actually tell the difference between rain and p down our back.

I mean my point of view on it is that the initial release of the virus was an accident. China labs and production have famously terrible quality control.

But once they realized it was released, they intentionally left international flights open MUCH longer than domestic flights and commissioned their propaganda arms in EU and US to spread the disease to the rest of the world and ensure a huge overreaction to the virus itself.

The purpose was to ensure that China was not the ONLY country economically affected.

And the Democrats and MSM are more than happy to go along.

This Chinese disinformation campaign is really dangerous – both in inciting bigotry against Americans and raising the risk of conflict with America.

Have you seen the Racist videos the communists are putting out?

I guess why I don’t think this was some brilliant evil plot by the Chinese Communist party to destroy the world economy is that the easier and more likely explanation is the malevolence and incompetence that is always at the core of tyrannical governments, especially of the communist variety. A virology lab run by these idiots? What could go wrong? Same reason the Soviets created the Chernobyl disaster. No brilliant master plan here. Just stupid business as usual.