A study showed that recovered patients might not get reinfected. Trump’s personal valet tests positive. The virus continues to perplex doctors with the way it affects the body. 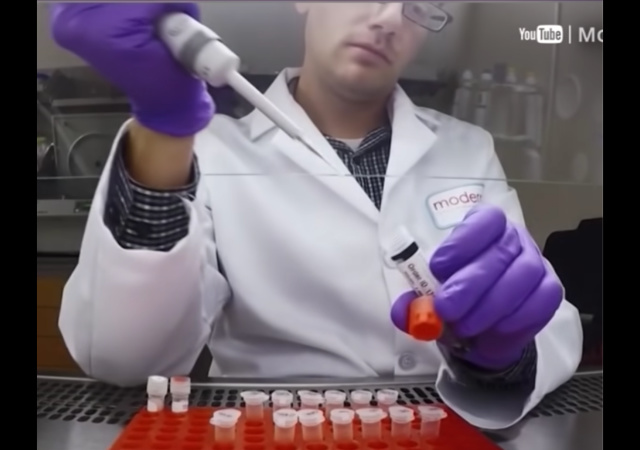 The Food and Drug Administration (FDA) gave Moderna permission to move to phase two “shortly,” which means the crucial phase three can begin in early summer:

On Thursday, Moderna announced that the Food and Drug Administration had cleared its application to proceed to a clinical trial involving about 600 people.

The main goal of this set of tests is to find out if the vaccine is safe and if positive results from the first few dozen volunteers in the first phase can be replicated in a much larger group. If it is successful, later studies, known as Phase 3 trials, will determine exactly how well the vaccine works.

The mRNA-1273 vaccine “relies on genetic material known as messenger RNA, which carries the recipe for making proteins to tiny ribosome chefs inside cells.”

Dr. Anthony Fauci said it could take 12 to 18 months until “a vaccine to be widely available to the public.”

A brand new study revealed that those who recovered from the coronavirus “eventually produce antibodies to the virus.” This means they might not get the virus again:

Researchers in China tested the blood of 285 patients hospitalized with severe COVID-19 illness and found that all had developed antibodies within two to three weeks of their first symptoms.

Antibodies are blood proteins produced by the immune system to fight viruses and may prevent future infections.

The study, which was published in the Nature Medicine journal by researchers at Chongquin Medical University, “brings much-needed clarity, along with renewed enthusiasm” to efforts to develop and implement widescale antibody testing, National Institutes of Health Director Francis Collins wrote Thursday in a blog post.

“Although more follow-up work is needed to determine just how protective these antibodies are and for how long, these findings suggest that the immune systems of people who survive COVID-19 have been primed to recognize SARS-CoV-2 and possibly thwart a second infection,” he wrote, using the technical name for the specific coronavirus causing the disease.

The valets are members of an elite military unit dedicated to the White House and often work very close to the President and first family. Trump was upset when he was informed Wednesday that the valet had tested positive, a source told CNN, and the President was subsequently tested again by the White House physician.

In a statement, the White House confirmed CNN’s reporting that one of the President’s staffers had tested positive.

“We were recently notified by the White House Medical Unit that a member of the United States Military, who works on the White House campus, has tested positive for Coronavirus,” deputy White House press secretary Hogan Gidley said in a statement. “The President and the Vice President have since tested negative for the virus and they remain in great health.”

Valets assist the President and first family with a variety of personal tasks. They are responsible for the President’s food and beverage not only in the West Wing but also travel with him when he’s on the road or out of the country. Past presidents have relied on them not only for these matters, but also as confidants. The valets have an inside view to a president’s personal life like few others.

A White House source said the valet, a man who has not been identified, exhibited “symptoms” Wednesday morning, and said the news that someone close to Trump had tested positive for coronavirus was “hitting the fan” in the West Wing.

Most think of the coronavirus as a respiratory infection, but doctors have had patients with symptoms “from head to toe.”

One patient, 67-year-old Garvon Russell, had inflamed lungs, kidney failure, and a blood clot in a vein in his leg:

As the number of Covid-19 patients grows, doctors are learning its damage can extend well beyond the lungs, where infection can lead to pneumonia and acute respiratory distress syndrome, the sometimes fatal condition Mr. Russell had. The disease can also affect the brain, kidneys, heart, vascular and digestive system. Some patients have sudden strokes, pulmonary embolisms or heart-attack symptoms. Others have kidney failure or inflammation of the gut.

Infection can affect the nervous system, causing seizures, hallucinations or a loss of smell and taste. It may affect pregnancies, though the science is nascent: The placenta of a patient who miscarried during her second trimester tested positive for the virus and showed signs of inflammation, according to a paper published April 30 in the Journal of the American Medical Association.

The virus’s strange effects go beyond anything doctors say they usually see with other viral infections. “It seems to strike so many systems,” said Maya Rao, a nephrologist at New York-Presbyterian/Columbia University Irving Medical Center in New York who is treating Covid-19 patients with acute kidney failure. “We don’t understand who gets it.”

Do you really think the esteemed Dr. Faucci is going to approve a vaccine?

Yes, Dr. Fauci will have to make sure the vaccine is 100% safe and 100% effective. That could take years and years. The economic devastation he has wrought doesn’t matter. We can’t lose a single life from a vaccine. (sarc).

The sabotaging of the inexpensive and safely used drug Chloroquine as a treatment in favor of the more expensive Remdesivir is a profound abomination.

We continue to see reports about the multi-pronged attack on the body by the virus.

The virus’s strange effects go beyond anything doctors say they usually see with other viral infections. “It seems to strike so many systems,” said Maya Rao, a nephrologist at New York-Presbyterian/Columbia University Irving Medical Center in New York who is treating Covid-19 patients with acute kidney failure.

Then we see and hear people say with absolute certainty that the virus didn’t come from a lab. Maybe we’ll never know. We are learning more about General Michael Flynn and the FBI though, so perhaps we will learn the truth about the Chinese Corona Virus.

The reports are based on the arrogant assumption that the Chinese do not posses the brain-power to bio-engineer and re-purpose a virus. The writers of the technical papers just can’t envision humans engineering the RNA sequence of portions of the Virus.

Even if that arrogant and Xenophobic assumption is the true, it is likely the virus leaked from a virology lab in Wuhan.

So the authors of these technical papers argue in essence, “We are too stupid to do it” Therefore the Chinese certainly could not have done any bio-engineering. Sounds racist to me.

notamemberofanyorganizedpolicital in reply to Liberty Bell. | May 8, 2020 at 11:23 am

Never believe anything coming out of New York City!

I’ve maintained that it was likely a lab accident for a long time.

For the weaponized theory, it is unlikely. You don’t just make a virus by putting it together like pieces of molecular legos. You use enzymes that splice in new sequences of DNA or RNA and those enzymes leave behind fingerprint sequences that indicate the splicing. Natural viruses can mutate this way, too, but their fingerprints tend to disappear over time as a virus mutates.

That’s how they can say there is no evidence it was created…because the fingerprint sequences of being man-made aren’t there.

I think it is going to be very easy to make a Fake Vaccine for a Fake Virus. After you give everyone the Vaccine, you just declare any death from that point forward as “Not Covid”!!
See? Guaranteed 100% Success!!!

There is a point to what you are saying. Fear and economic devastation are deadlier than this virus. Rapid approval of a vaccine is essential to getting this Nation back on track. Unfortunately, there are many who view this devastation as an opportunity to obtain greater power and money

INOVIO has demonstrated that DNA medicines can be delivered directly into cells in the body via a proprietary smart device to safely produce a robust immune response in clinical trials involving more than 2,000 patients in 6,000 administrations. Safety, Tolerability and Immunogenicity of INO-4800 for COVID-19 in Healthy Volunteers.

So what about this ongoing study that ALSO looks to be as promising if not a better solution?

INOVIO has demonstrated that DNA medicines can be delivered directly into cells in the body via a proprietary smart device to safely produce a robust immune response in clinical trials involving more than 2,000 patients in 6,000 administrations. Safety, Tolerability and Immunogenicity of INO-4800 for COVID-19 in Healthy Volunteers.

So what about this ongoing study that ALSO looks to be as promising if not a better solution?

With all the advances in biotech, I’m both looking forward to and dreading the day when we can just ‘print’ those virus fragments put into vaccines so the immune system can identify and kill the real full virus when it shows.

This is off subject, but I would like to know if everyone in America got a card from the “we need a bailout” post office saying how we should mind the CDC and not venture outside. They really need a new Carving Marvin.

Meanwhile in the communist Chinese city of San Antonio…..

Vaccine first: vaccines for corona viruses are nonexistent. That is correct. To date there are no recognized vaccines effective against corona viruses. Vaccines effective against influenza have an effective rate of between 25% and 45%. Not especially impressive. Also, as these types of viruses are subject to rapid mutation, vaccines and counter agents have to be constantly under development to keep up with the viral agents involved.

On widespread viral symptoms: This claim has to be taken with a grain of salt. Possibly a large grain of salt. While multiple symptoms can occur in a person suffering from a COVID infection, this does not automatically mean that they are caused by the virus. Almost all of these symptoms occur in elderly people who have pre-existing serious health problems. They could be caused by those underlying health problems, not direct action by the virus. This is just medical spit-balling, at this point.

Chicago is reporting all their Wuhan virus cases are presenting with shot gun wounds too.

Those telling us to wear masks and gloves, plus maintain 6ft away from each individual do not abide by the same orders. So why should I?

Everyone was KungFlu fighting, those Wuhan Virus were fast as lightening.
Although the ChinaVirus is a little bit frightening
Its the book of vaccines that you’re writing

come arrest me….please…although its very far from their jurisdiction and I am due 3-6″ snow and 40 mph winds starting tonight….its safe to travel I promise…

notamemberofanyorganizedpolicital in reply to dmacleo. | May 8, 2020 at 2:04 pm

Ha! Thanks for the laugh.

dmacleo in reply to notamemberofanyorganizedpolicital. | May 8, 2020 at 3:30 pm

Cut Gates out of the money and see how we suddenly don’t need a vaccine.