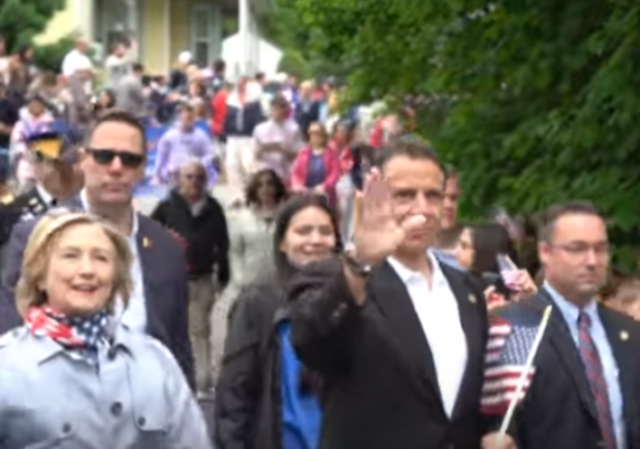 Despite the staggering number of nursing home deaths as a result of the gubernatorial lockdown rules, Hillary Clinton praised New York Gov. Andrew Cuomo’s response to the coronavirus pandemic in a Memorial Day tweet.

“I’m missing our Chappaqua Memorial Day parade today while also feeling grateful to leaders like [Cuomo] for making responsible decisions to keep people safe,” Clinton wrote. “Wishing everyone a safe and healthy holiday. @BillClinton and I will be waving our flags at home.”

Clinton, who represented New York in the U.S. Senate from 2001 to 2009, included a photograph of herself alongside Cuomo at a previous Memorial Day celebration.

…An executive order by Cuomo signed in late March mandated that nursing homes readmit coronavirus patients after they no longer needed hospitalization. Critics believe this policy caused the virus to rip through nursing homes filled with victims in the most vulnerable age group.

Cuomo repealed the policy earlier this month and forbade hospitals from discharging patients back into nursing homes until they have fully recovered, but the Democrat defended order by asserting hospitals were at the risk of being overrun and could not manage to care for any nonessential patients.

Wishing everyone a safe and healthy holiday. @BillClinton and I will be waving our flags at home. ?? pic.twitter.com/oi2NAUT6R6

Many on social media slammed Clinton for the tone-deaf tweet and ill-considered praise.

If wasnt so busy in his pissing contest with @NYCMayor less lives would have been lost and maybe unless there were evil intentions he would #ProtectOurSeniors https://t.co/WBlGnqu26c

And that was on top of many responses related to Clinton’s political liabilities.

You’re also missing the White House, but we social distanced you back in 2016.

Resuming normal Memorial Day activities without social distancing is further proof that most Americans are tired of COVID theater.

A video of a pool party featuring dozens of people without masks in the Lake of Ozarks went viral over the weekend.

A majority of the people were not wearing face coverings and hung out close to each other as seen in photos and videos.

The Missouri Department of Health and Senior Services didn’t have a comment on the pool party, but it issued a statement urging all residents and visitors to be cautious and remain socially distant.

“When they then carry the virus and transmit it to a more vulnerable person, this is when we tend to see the long-lasting and tragic impact of these decisions that are being made,” the agency said in a statement.

The state currently has 11,988 confirmed cases and saw a 6.2% jump in new cases over the last week, according to health data from the state.

Police said they had to break up several crowds in Daytona Beach Saturday night.

Trump says schools in the US should be opened ‘ASAP’

President Donald Trump is tired of COVID theater as well.

President Trump urged the reopening of schools throughout the U.S. on Sunday, as most remain closed to limit the coronavirus spread and protect the health of students during the pandemic.

His tweet was an apparent reaction to similar comments from Fox News’ Steve Hilton on his program “The Next Revolution.” Trump tagged Hilton and Fox News in a tweet Sunday where he mentioned reopening schools “ASAP.”

Schools in our country should be opened ASAP. Much very good information now available. @SteveHiltonx @FoxNews

It is clear to most people not suffering from Trump Derangement Syndrome that Trump went golfing to send a message that the curve has been flattened, and now it is time to reopen the country.

However, the press spent a good portion of its coverage this Memorial Day deriding his decision.

US President Donald Trump paid tribute to fallen members of the American military on Monday to mark Memorial Day while defending his decision to spend most of the holiday weekend playing golf as the US death toll from the coronavirus outbreak neared 100,000.

“Some stories about the fact that in order to get outside and perhaps, even a little exercise, I played golf over the weekend. The Fake & Totally Corrupt News makes it sound like a mortal sin – I knew this would happen!,” Trump tweeted, saying this was the first time he had played in nearly three months.

Clearly, Trump was getting the sunshine for Vitamin D production and exercise for weight management — two activities that help stave off the worst effects of coronavirus.

“Wishing everyone a safe and healthy holiday. @BillClinton and I will be waving our flags at home.” Hammer and Sickle?

Look at that pic.

Who knew that Hillary is so short……..

DSHornet in reply to notamemberofanyorganizedpolicital. | May 27, 2020 at 9:32 am

Notice her odd posture, appearing to lean slightly backward and ram rod straight. If she’s wearing a brace that makes her do that, it’s one more indication she’s not in good health.
.

It seems life only means something to the left if there is political gain.

Yeah, Cuomo’s actions were damn near perfect. Except for seeding NY nursing homes with highly contagious Wuhan-19 patients spiking deaths there. The party that supports mass infanticide can’t really be counted on to protect our most vulnerable from geriatricide.

The worst thing about virtue signaling Democrat politicians like Bill and Hillary, and Cuomo too, is they all have staff at their homes to grocery shop, cook, clean, and a hairdresser who comes to the house. It’s only us little people who should “stay safe”?

That Ozarks thing is tiny compared to what I saw a month ago in Turner Falls, OKlahoma. Natural swimming hole, waterfall park. It was a hot weekend, looked like the middle of summer. Seriously, that Ozarks pool crowd was a fraction of the size.

I thought it was great.

Did somebody in the media actually track how much time Trump spent on the golf course, I doubt that “most” is not the correct answer.

Back from fun weekend AZ road trip. Everywhere was mobbed. Social distancing? Back to normal. There will be no putting that genie back in the bottle without civil war. Waiting to see how many of the fascist politicians “punish” us for being disobedient proles. The AZ governor and Sen McSally get it. AZ is open for business.

And Arizona has a heaping helping of UV every day to kill microbes. The Arizonans have little to fear in the great outdoors.
.

Some of these crowded pool and beach scenes are similar to those in Florida during spring break.

In Florida, the young people seemed to not believe in the possibility of a serious medical problem, believing that they won’t be impacted.

Now that there is information about the disease, mild reaction/illness in certain age groups, treatment options, perhaps most of those people in the pool are realizing that they will not get the “herd immunity” unless they are exposed to it, get it and get over it.

40% of the U.S. Deaths from Wuhan rest at the feet of Cuomo who Clinton praises. He and his family strongly believe that they are above the rest. It was easy to see why Clinton finds reason to praise him. Birds of a feather……

Honest people abhor politics. The basis of all politics is to lie, cheat and steal to get what the politician wants. Politicians care nothing about their constituents. They have no center or moral compass. They will do anything, ANYTHING to get what they want. Occasionally, you actual get an elected official who speaks the truth and keeps his promises. But, they are very few and very far between. And, they do not last long, on the political stage. If you study politics for very long, you know how Diogenes felt.

Honestly? We have the Bag Lady to thank for saving our Republic.

But for her incompetence and stupidity, we would have had her as our president instead of the great PDJT.

looking like he was trying to keep some people safe — er,

convincing some gullible folks he was tring to keep some people safe — er,

providing some fodder for useful idiots to chant, as if he were keeping people safe.

There. Bad fiction for the useful idiots is way easier than doing reality.

Given hillary clinton is fawning over cuomo, she must know some sexual dirt on cuomo.