Wuhan Virus Watch: David Marcus Tells Tucker the Only Way to Get NYC Back ‘is By Getting Back to Work’

Wuhan Virus Watch: David Marcus Tells Tucker the Only Way to Get NYC Back ‘is By Getting Back to Work’

Is there a second coronavirus wave coming? Some think so since China took control of the PPE factories. 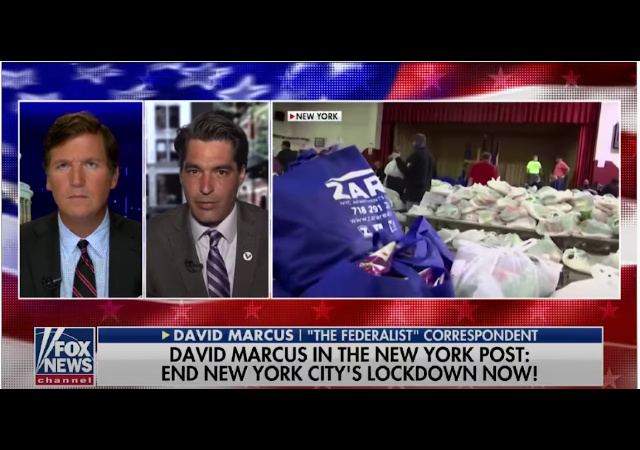 Tucker Carlson has David Marcus on his show to expand on his op-ed calling to end the New York City lockdown.

In The New York Post, Marcus pointed out that the shutdown has led to empty streets in NYC. The coronavirus lockdown has caused many old haunts to close down for good.

Marcus stressed the only way to survive is to open. On Carlson’s show, Marcus said:

I understand Bill de Blasio thinks there is some giant pot of gold somewhere the Republican leprechauns are hiding, but there isn’t. The only way the city gets back to work is by getting back to work. It is the only way that creates the funds needed to do all the things the city and the people in the city need to do.

Michigan AG Blasts Trump for No Mask, But He Did Wear One!

Democratic Michigan AG Dama Nessel blasted President Donald Trump for not wearing a mask during his tour of a Ford plant:

“I am ashamed to have him be President of the United States of America,” Dana Nessel, a Democrat, told CNN’s Wolf Blitzer on “The Situation Room” Thursday.

“And I hope that the voters of Michigan will remember this when November comes, that he didn’t care enough about their safety, he didn’t care about their welfare, he didn’t respect them enough just to engage in the very simple task, the painless task, the easy task of wearing a mask when he was provided one.”

“And so I hope that we’ll have a new president soon enough who does respect people more than this president does,” she continued.

Her comments come after the President toured and delivered remarks at the Ford plant in Ypsilanti, which has been repurposed to produce ventilators and personal protective equipment.

Nessel already warned Trump that the state would not welcome him back if he did not wear the mask.

However, Trump said he wore a mask while on tour, but did not “want to give the press the pleasure of seeing it.”

@realDonaldTrump‘s actions in Michigan today were extremely disappointing, and yet totally predictable. Even though you have a president who doesn’t care about you, you have a governor and attorney general who do. Watch my response on @CNN below. ⬇️pic.twitter.com/OQfJSc5S7T

CDC Director Robert Redfield told The Hill he thinks the U.S. can reopen:

“I want to clarify that the community-based transmission, the community-to-community transmission that overwhelmed the public health departments in late February, March, April, that’s really coming down,” Redfield said in an interview with Steve Clemons, author of The Hill’s daily Coronavirus Report.

Redfield told The Hill that the CDC is working with state public health agencies to contain outbreaks in nursing homes, among homeless populations, in meatpacking facilities and in other areas. He signaled states will have sufficient testing and contact tracing to follow the White House’s guidelines for reopening.

The challenge, he said, will be ensuring the country has enough testing and contact tracing for a potential second wave of the virus in the fall and winter months, which would coincide with the annual influenza season.

Redfield said the CDC is looking to expand the contact tracing workforce by between 30,000 and 100,000 people. Experts have said hundreds of thousands of contact tracers will be needed nationwide to identify those who have been infected with the coronavirus and those with whom the infected person has come into contact.

“Ultimately, that number [of contact tracers] is going to be decided by the efforts that we have with the local health departments,” Redfield said. “But that’s ongoing now, and it needs to be in place, operationally ready by October of this year.”

Suzi LeVine, commissioner of the state Employment Security Department (ESD), disclosed the staggering losses during a news conference Thursday afternoon. LeVine declined to specify how much money was stolen during the scam, which is believed to be orchestrated out of Nigeria. But she conceded that the amount was “orders of magnitude above” the $1.6 million that ESD reported losing to fraudsters in April.

LeVine said state and law enforcement officials were working to recover as much of the stolen money as possible. But she declined to say how much had been returned so far. She also said the ESD had taken “a number of steps” to prevent new fraudulent claims from being filed or paid but would not specify the steps to avoid alerting criminals.

Thursday’s disclosure helped explain the unusual surge in the number of new jobless claims filed last week in Washington. For the week ending May 16, the ESD received 138,733 initial claims for unemployment insurance, a 26.8% increase over the prior week and one of the biggest weekly surges since the coronavirus crisis began.

That sharp increase came as the number of initial jobless claims nationwide fell 9.2%, to 2.4 million, according to data released earlier in the day by the Labor Department.

Indeed, the surge in claims made Washington the state with the highest percentage of its civilian labor force filing unemployment claims – at 30.8%, according to an analysis by the Tax Foundation, a nonpartisan Washington, D.C., think tank. Nevada, the next-highest state, reported claims from 24.5% of its civilian workforce.

Is there a second coronavirus wave coming? Some think so since the commies took control of the PPE factories:

New Yorker Moshe Malamud, who has done business in China for over two decades, was moving tens of millions of pieces of protective gear to the U.S. at the height of the crisis but said suppliers in recent weeks had been overwhelmed with orders from the Chinese government.

“I was placing a larger order with one of the bigger distributors and he tells me, ‘I can complete this order but after this we’ve been contracted by the Chinese government to produce 250 million gowns,’” said Malamud, who lived in China for a decade before founding aviation company M2Jets.

He said he heard a similar story about another manufacturer making thermometers.

“We hear how China is up and running and the virus is past them, so I asked, ‘What are they ordering 250 million gowns for?’ and of course no one is talking.”

“I’ve been hearing this a lot from other manufacturing institutions that say, ‘We can give you a little bit, but basically we’re concentrated between now and the end of the summer manufacturing stuff for the Chinese government in anticipation of a second wave,’” he continued.

Well not getting NY back is a good reason to keep the lockdown going.

That’s what I was thinking, keep it locked down, let NYC burn. How delightful it is to watch them destroy themselves, and then pat themselves on the back for doing it!!

We have incredibly stupid enemies.

Wearing a mask has become a new facet to the Dhimmi-crats’ incessant, infantile and totalitarian virtue-signaling displays. Plenty of doctors feel that wearing a mask does squat to prevent transmission, and, actually introduces potential respiratory problems to the wearer. It’s cosmetic BS that the Dhimmis have seized upon as their latest sanctimonious fetish.

notamemberofanyorganizedpolicital in reply to guyjones. | May 22, 2020 at 1:10 pm

Everyone is starting to call them face diapers. How appropriate democrats should have to wear diapers

A forthcoming Australian scientific study concludes that the coronavirus causing the global pandemic contains unique properties suggesting it was manipulated in a Chinese laboratory and was not the result of a natural occurrence.

Five scientists who conducted the study discovered an unusual ability of the SARS-CoV-2 virus, as the pathogen behind COVID-19 is called, to easily infect humans.

The scientists said there is no sign so far that the virus can be found in other animals, including bats or the exotic wildlife sold for fresh meat at a market in the Chinese city of Wuhan, where the virus was first identified and where China maintains a major laboratory studying such viruses.

The preliminary report of the study, which is now being peer-reviewed, is based on computer modeling of the virus’ ability to infect various animals, including humans. It was published May 13 on the Cornell University website arXiv.org, which is used for discussion of pre-publication papers.

the unmatched ability of the virus’ protruding spike to infect human cells.

If this is the case, then the extraordinary precautions were/are justified. At least until we can mobilize to mitigate its progress. A Planned Pathogen protocol, including the disinfectant HCQ+AZ that aborts its offspring, is integral to reducing present and future burdens, and excess [human] deaths.

The bracketed numbers refer to footnotes/papers that support usage.

In case you haven’t seen the science behind the zinc/HCQ, watch this by MedCram

You Tube is blocking more of the videos – must be getting close to the target…..

there is no sign so far that the virus can be found in other animals, including bats or the exotic wildlife sold for fresh meat at a market in the Chinese city of Wuhan

Whether an affirmative action or accidental release, the proximity of the level-4 biohazard research lab to the epicenter of the outbreak cannot be denied.

“The preliminary report of the study, which is now being peer-reviewed, is based on computer modeling of the virus’ ability to infect various animals…”

I’ll reserve judgement, but:
– preliminary
– not peer reviewed yet
– based on computer models instead of real animal studies
– guaranteed to advance or impede some political agendas

This is not a combination that inspires any confidence.

On the other hand, it came from the internet so it must be true.

Sorry I can’t give the precise times, but around three minutes in she discusses her husbands case, which was severe, but no ventilator. At about six minutes, she admits he took it.

Oh well, Biden was vetting her for VP, guess that ain’t gonna happen.

That horse has left the barn. Companies have discovered that at least in some cases working from home has worked. They may never go back to the old model of commuting into Manhattan.

I have been going through my state’s Health Dept. data and my charts show that while total hospitalizations have remained constant – the Mortality rates for Hospital Cases has dropped from 4% to BELOW 2% over just the last 2 months.

Doctors have protocols that are now twice as effective two months ago.

In OK, there has been an increase in testing in LTC facilities as well as meat packing plants.

Females used to be the larger group of cases, but now it is men.

And, one county in the panhandle (Texas Cty) has the 3rd most number of cases. They have 851 cases out of a population of 20,856 or 4.08% of the people. In comparison, OK Cty and Tulsa Cty have .14% case rate. Texas Cty has the meat packing plants.

Having easily available information makes it easier to justify re-openings. The states with Dems as leaders tend to have more of the information hidden from their citizens.

Would love to have a link to that study.

Trump: Americans Who Need And Want To Return To Work Should Not Be Vilified

BierceAmbrose in reply to notamemberofanyorganizedpolicital. | May 22, 2020 at 8:24 pm

The point of the lockdown was to keep people alive, to live life. If we keep them from living their lives, we’re not saving much.

Indeed, locking people up was, and still is, a punishment.