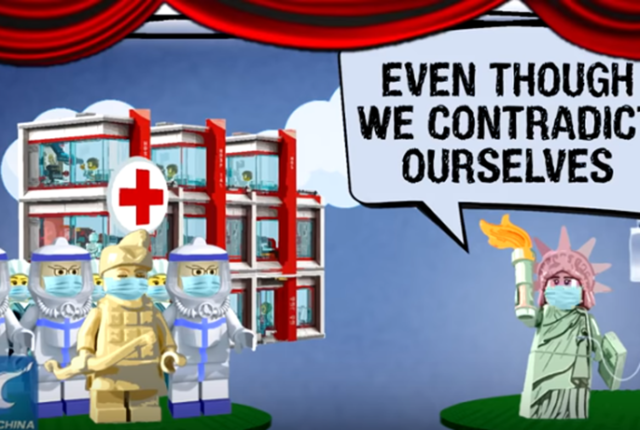 Today’s update will start with news that Chinese officials have made another sensible decision in their handing of the COVID-19 pandemic that began in their Wuhan laboratories.

China has just published a short animation titled “Once Upon a Virus” mocking the U.S. response to the new coronavirus using Lego-like figures, stilted dialog, and propaganda.

…In the animation posted online by China’s official Xinhua news agency, red curtains open to reveal a stage featuring Lego-like figures in the form of a terracotta warrior wearing a face mask and the Statue of Liberty.

“We discovered a new virus,” says the warrior.

“So what?” replies the Statue of Liberty. “It’s only a flu.”

As the warrior issues warnings about the virus and counts off the grim milestones in China’s outbreak, the Statue of Liberty replies dismissively with echoes of Trump’s press conferences in which he played down the severity of the illness.

“Are you listening to yourselves?” asks the warrior as the statue begins to turn red with fever and gets hooked up to an intravenous drip.

“We are always correct, even though we contradict ourselves,” the statue replies.

“That’s what I love about you Americans, your consistency,” says the warrior.

The animation clearly shows that China is better at making deadly viruses than entertaining and informative animation. Furthermore, as the U.S. recovers economically from the pandemic, consumers will remember this cartoon and make choices for items not “Made in China.”

Wuhan virus lab ‘cover up’: Startling photos of scientists wearing little or no protection as they handle deadly bat samples mysteriously vanish from its website

Maybe instead of creating silly graphics, Chinese officials should concentrate on locating evidence and assisting in the investigation of how the virus escaped containment.

Pictures which appear to show slack safety standards at the Chinese laboratory at the centre of international sus­picion over Covid-19 have been systematically deleted from its website – as Donald Trump continues to ramp up the pressure on Beijing over its potential role in the outbreak.

During the past month, Wuhan’s Institute of Virology has removed photographs of scientists working in its laboratories and edited out references to visits by US diplomats who subsequently raised the alarm about the laboratory’s work on bats.

US President Donald Trump announced on Thursday that he had seen intelligence that gave him a ‘high degree of confidence’ that the global crisis had its origins in the institute – a month after The Mail on Sunday first revealed that British Cabinet Ministers had received classified briefings raising the possibility of a leak from the institute.

Downing Street did not take issue with President Trump’s remarks. ‘There are clearly questions that need to be answered about the origin and spread of the virus,’ a spokesman for Boris Johnson said.

Wuhan virus lab ‘cover up’: Startling photos of scientists wearing little or no protection as they handle deadly bat samples mysteriously vanish from its website
https://t.co/GwLezThuR3

It is important to note that the handing of high-hazard samples is typically done in full-body suits, with respiratory protection, and many other biosafety controls.

A new study shows why getting out to the beach may be a good way to end the spread of the Wuhan Coronavirus.

People with low levels of vitamin D may be more likely to die from the coronavirus, according to a preliminary study.

Researchers at Queen Elizabeth Hospital Foundation Trust and the University of East Anglia in England compared the average vitamin D levels of 20 European countries with COVID-19 mortality rates — and found “significant relationships” between vitamin D levels and the number of deaths caused by this infection.

The study, which has not been peer-reviewed, notes sun-starved “Nordic” countries are among the most at risk.

“We believe that we can advise vitamin D supplementation to protect against SARS-CoV2 infection,” the researchers wrote.

More good news from a study from South Korea, showing patients once infected with the coronavirus did not relapse.

Scientists said the wave of South Koreans who tested positive for COVID-19 even after they recovered did not have the virus reactivate after going dormant and that they were not reinfected.

South Korea announced in early April that some patients who had recovered from and tested negative for the virus later tested positive, suggesting that the virus could reactivate or that patients could be reinfected. The country has recorded this happening in 263 patients, The Korea Herald reported.

But the country’s infectious-disease experts said on Thursday that the positive test results were likely caused by flaws in the testing process, where the tests picked up remnants of the virus without detecting whether the person was still infected, The Herald reported.

Geeze, I’ve been avoiding chinese products for a long time. But it’s hard. Got a water hose nozzle yesterday at Home Depot. China v. Taiwan. Got the one from Taiwan.

If I could only buy an all in one printer made somewhere else!!! With good software!!!

And the water hose – made in the U.S.A. of “global components.”

Chi-na has been putting Made in Vietnam on many of their products also so you can’t really buy any thing labeled that either.

Oh, and that China video is Racist. China government has always been Racist again st America.

TIME TO SUE them and SUE their American domestic enemy allies.

Recovering Lutheran in reply to notamemberofanyorganizedpolicital. | May 3, 2020 at 1:36 pm

Not surprising. Chinese corporations (read: the Chinese Communist Party) own most of Vietnam now. My wife has a Vietnamese friend living in the US whose family was forced by the Vietnamese government to sell their small business at a fraction of its real value. They are living in Vietnam in squalor, and they are not the only ones.

Milhouse in reply to notamemberofanyorganizedpolicital. | May 3, 2020 at 1:53 pm

The video is NOT racist, any more than calling the Wuhan Disease by its name is racist. The video is dishonest, yes, but not racist.

The chinese are the most racist people on earth in my experience and I’ve been to over 60 countries.

And that has what to do with anything? Point to even one line in the video that is in any way racist. You can’t. Race has nothing to do with it.

Close The Fed in reply to notamemberofanyorganizedpolicital. | May 3, 2020 at 2:49 pm

Thx for this info.

I’ll avoid them from now on.

We can’t even manufactore our own plastic bags. I looked and looked; the best I could find were Made in USA from Global Materials.

Just wait, the next trick, if they haven’t done it already is what Japan did back in 1967. They created a city in Japan and named it Usa, all products made there were clearly marked “Made in USA”. Those were the days, at least Japan just wanted our business, unlike China, who wants us all, men, women and children dead! Their words, not mine.

China is interfering with our election process.

They are colluding with the DEMS.

TIME TO SUE DEMS & THEM.

Oh China…if you weren’t so devious, you’d be good comedy.

Ambassador warns of fallout from inquiry into origins of coronavirus.

Products sold in the EU must carry a “CE” mark to show they are compliant with EU environmental and other regulations.

Yet many products (e.g., USB chargers) sport what looks like a CE mark but which is really a “China Export” mark. This has been going on for years: if you look for it you’ll find this deceptive symbol is on practically everything:

I bought screwdrivers for a project and had to look but finally found a package that said Made in the USA. The US should bring manufacturing of essential goods and then sue China into the Stone Age and seize any assets they have in this country to satisfy the judgment.

In fact Doctor Farquaad has turned the entire response into a sick travesty.

It seems the US was helping to fund the Wuhan lab where the Wuflu originated:

How ironic it would be if the US taxpayers were dying from a virus the Obama administration helped paid for. Our self-anointed moral and intellectual betters strike again!

notamemberofanyorganizedpolicital in reply to Recovering Lutheran. | May 3, 2020 at 4:54 pm

Dr Hillary Fauci did it.

I really think it’s time for a #ChinaBoycott.

They’re too big, we got them there, and we’ve paid big time in so many ways.

Wally World will suffer, but it’s in the interest of our sanity and our national security.