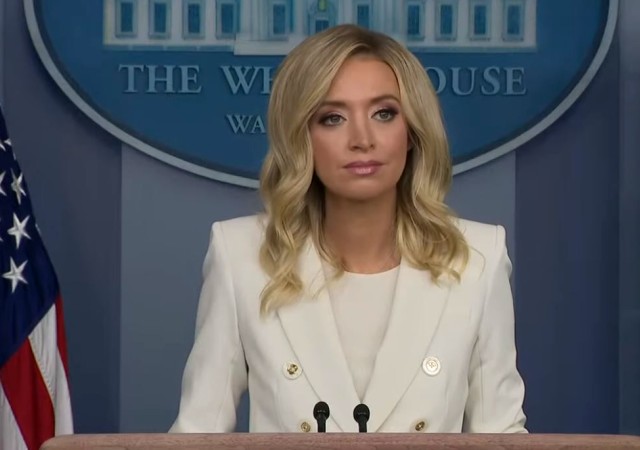 If you heard a lot of “dayums” Wednesday afternoon but weren’t sure where they were coming from, it was very likely due to new White House Press secretary Kayleigh McEnany. She gave a Reuters reporter an epic answer after he asked about past statements she made on the Trump administration’s response to the Wuhan Coronavirus outbreak.

“In a previous life, before you were press secretary, you worked for the campaign and you made a comment I believe, on Fox, in which you said President Trump will not allow the coronavirus to come to this country. Given what has happened since then, obviously, would you like to take that back?”

It was a classic media “gotcha” question. What makes it primarily classic in this particular instance is that, as has been the case in so many other situations, the question added nothing of value to the current discussion of where we are now and how we move forward.

Outside of partisan Democrats, there is not a single person sitting at home who wants to know if the White House press secretary regrets comments she made back when the U.S. had very few diagnosed cases, and at a time when the MSM themselves were downplaying the threat. What people do want to know, however, is what Trump and his Wuhan Coronavirus task force are doing to help combat the virus and get America back on track.

Nevertheless, the gotcha question was asked because this is who the White House press corps are. But McEnany clearly came loaded for bear:

I’ll leave you with those questions and maybe you’ll have some answers in a few days.”

The only thing missing was a literal mic drop as she exited stage right with a smile on her face. Watch:

THIS IS GOLD:@PressSec is asked by a reporter about her previous comments on coronavirus and she flips the question on the media and references specific stories, asking if they'll be retracting them.

She then left the briefing as they screamed.

What made it even more perfect was hearing Mason in the background muttering about how McEnany was prepared:

The cry from a journalist of "You were prepared for that!" as she walks off is really one for the ages. https://t.co/JcVMAApSDM

McEnany’s past comments have been featured in various media highlight reels as an example of how Trump, members of his administration, and some on his campaign staff were allegedly downplaying the threat from the Wuhan Coronavirus, so of course she was prepared.

Mason’s media colleagues, I should note, were not amused:

.@jeffmason1 asks Kayleigh about her old statement that the president wouldn't let the coronavirus come to the country. She says she wants to turn it back on the media and reads a list of headlines about the coronavirus, asking if the media wants to take those back. Then leaves.

In retrospect, this is what everyone (journalists most of all) should be asking about Mason’s question and what relevance -if any – it has to anything whatsoever:

What I would like to know is this: what piece of information could this reporter get in response to his question that would be of use to me or anyone? https://t.co/ZK9RqjUVxB

In fact, Mason’s question is the exact type of thing signs like this one were made for:

Someone left this note for the OAN personality at the White House: “Do you think your question was helpful in halting the spread of the coronavirus?” pic.twitter.com/Jy8rzVs5Y0

Because Mason’s not on the White House press corps’ naughty list, he likely won’t ever have presents like that waiting for him at his press station. But he should.

The propaganda machine doesn’t even realize how easy it is to feed there hate back to them.

The MSM twits are so infantile, obnoxious and utterly despicable.

They should at least have the honesty to drop the pretense and moniker of being “journalists,” and admit instead what is manifestly obvious to all observers — that they are rabid, water-carrying, Dhimmi-crat lackey-zealots and prostitute-propagandists for the Dhimmi-crat message and agenda.

You’re giving them too much credit. Stop being so nice!

Saw that in Molly’s twitter feed. She’s one of the very best journalists around.

What a beautiful comeback! She’s kind of easy on the eyes, too.

So much for the “dumb blonde” stereotype – you know, the one she just blew out of the water.
.

“You were prepared for that”, yes the Lib media is entirely predictable!

Prepared answer to a prepared question.

“What I would like to know is this: what piece of information could this reporter get in response to his question that would be of use to me or anyone?”

Who benefits from these gotcha questions? Obviously, anti-Trumpers in both parties and their allies in the media. *They* find such questions extremely useful.

What use are they in combatting the COVID-19 virus? None at all.

I notice how the reporter takes a metaphor and twists it into a physical item i.e. “President Trump will not allow the coronavirus to come to this country” turns into “Admit you were wrong and imply that Trump is responsible for all the deaths.”

Because that’s exactly what the pre-written stories were going to be “Presidential representative acknowledges Trumps role in underestimating CORVID-19 deaths.”

This wasn’t an incidental question tossed in at the end of the press conference, it was a kill-shot aimed at Kayleigh in order to take down Trump. And she turned it back against them like a pro.

The most concerning thing is that a “journalist” thinks being prepared for one’s job is somehow inappropriate.

Hey are they going to do Nerd Prom online this year?

They could invite Obama if Trump won’t attend.

If they can’t think of a way to toss this ball back to her (“in a few days,” or whenever) she can serve the same thing to them next time, and they’ll be caught with their collective pants down again.

A great advantage of this tactic is that all the targets are in the same boat, the Good Ship “White House Press,” and the whole batch of them can be criticized for the behavior of the most scurrilous. If a reporter from the Roosterpoot Picayune-Tatler bleats that his paper never said that everyone should visit Chinatown for the New Year blowout, that won’t make any difference, since somebody else on their crew did just that, and that one is enough to torpedo them all.

Falsus in uno, falsus in omnibus. The new motto of the blithering idiots of the White House Press Corps. It’s also their old one.

Kayleigh is the new Killer Hornet, she packs quite the sting

He should just take a nap from twitter for the next week.

“Outside of partisan Democrats, there is not a single person sitting at home who wants to know if the White House press secretary regrets comments she made back when the U.S. had very few diagnosed cases, and at a time when the MSM themselves were downplaying the threat.”

Precisely. A way to restate this truth is:

“Partisan Democrats sitting at home want to know if the White House press secretary regrets comments she made back when the U.S. had very few diagnosed cases, and at a time when the MSM themselves were downplaying the threat.”

Mason is simply doing exactly what his paying customers want him to do: reinforce their prejudices.

He should try to find a less immoral way to feed his family.

Jeff Mason was just REJECTED by Kayleigh McEnany. “Tears of a Clown” played softly in the background as Kayleigh walked away, leaving Jeff stunned and watery-eyed.

Maybe he should just stay home until his ass heals.