“We just felt bad that the leadership of our state was kind of getting lambasted. In South Dakota when somebody’s getting discouraged or down on their luck, we step up for each other,” said John Morris of Morris Inc. construction company, who organized the parade. 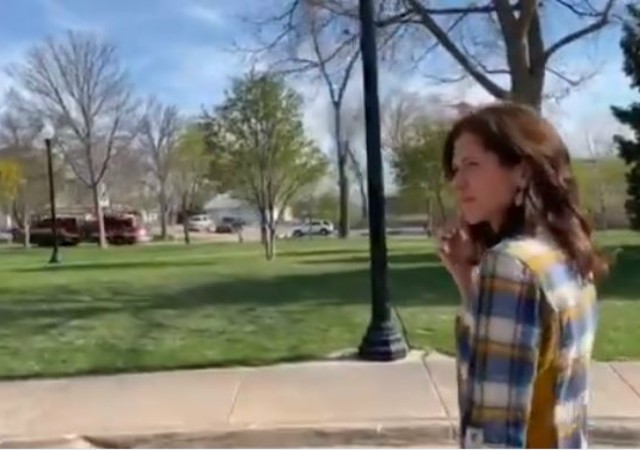 Like many other Republican governors who didn’t fall in line with the mainstream media’s “lock everything down” solution for every state in response to the Wuhan Coronavirus crisis, South Dakota Gov. Kristi Noem has been heavily criticized for not following their one-size-fits-all approach for how to combat the spread of the virus.

The Washington Post was among the many national media outlets including CNN to blame Noem last month for a virus outbreak that happened at the Smithfield Foods plant in Sioux Falls.

In a piece with the headline “South Dakota’s governor resisted ordering people to stay home. Now it has one of the nation’s largest coronavirus hot spots,” the Post, linked above, wrote:

But now South Dakota is home to one of the largest single coronavirus clusters anywhere in the United States, with more than 300 workers at a giant ­pork-processing plant falling ill. With the case numbers continuing to spike, the company was forced to announce the indefinite closure of the facility Sunday, threatening the U.S. food supply.

“A shelter-in-place order is needed now. It is needed today,” said Sioux Falls Mayor Paul TenHaken, whose city is at the center of South Dakota’s outbreak and who has had to improvise with voluntary recommendations in the absence of statewide action.

The entire article was one big bashfest against Noem, accusing her of taking a “throwback” approach to the crisis, and managing to find only people who were critical of her stance. It also included a predictable jab at President Trump for touting hydroxychloroquine as a treatment for the Wuhan Coronavirus, while also insinuating Sioux Falls Mayor TenHaken was more credible on what to do in the event of an outbreak than Noem:

But the governor continued to resist. Instead, she used a media briefing Monday to announce trials of a drug that President Trump has repeatedly touted as a potential breakthrough in the fight against the coronavirus, despite a lack of scientific evidence.

Yet as South Dakota’s experience shows, no part of the country is immune to being ravaged by the virus. And rescinding orders that people stay at home — or declining to issue them, as in the case of South Dakota and four other states — offers plenty of peril.

Reopening the country by May is “not even remotely achievable,” said TenHaken, who, like Trump and Noem, is a Republican. “We’re in the early innings of this thing in Sioux Falls.”

The Post’s attack, of course, was disingenuous for a variety of reasons. First, while Noem didn’t issue a statewide shelter in place order, she did what several other Republican governors did by limiting social gatherings. She also provided guidelines for businesses not considered essential to allow their employees to work from home and on how restaurants operating on a take-out basis only. Public schools were also closed weeks ago and will be closed for the rest of the school year.

Also, while the spread of the virus at the Smithfield plant was the state’s largest, even if Gov. Noem had put a statewide “stay at home” order in place, it wouldn’t have applied to the plant because it is considered an essential part of America’s food supply chain. So it was not shut down prior to the outbreak. Noem noted the distinction in a series of tweets at the time pushing back at her critics:

We trusted South Dakotans to exercise personal responsibility to keep themselves and their loved-ones healthy. They've stepped up to the challenge.

But some folks in the national press are improperly conflating that decision with the situation at Smithfield. (1/4)

Let’s be perfectly clear: a shelter-in-place order would NOT have prevented Smithfield from happening.

They are a critical infrastructure business. They are part of the nation’s food supply chain and contribute to South Dakota’s role feeding the country and the world. (2/4)

We’ve been in frequent communication with @VP Pence, @SecretarySonny, and the CEO of Smithfield. We’re working together on a plan to get the plant open as soon as it’s safe.

A CDC team arrives today to help us assess the situation on the ground. Additional details soon. (3/4)

Stay strong South Dakota. Together, we will get through this.

As it turns out, the national media’s swooping in to take swipes at Noem’s handling of the crisis didn’t sit well with some of the state’s residents, who threw a parade in her honor earlier this week:

Republican South Dakota Governor Kristi Noem had an impromptu parade thrown in her honor on Tuesday in the capitol city of Pierre. A local construction company organized the parade to show appreciation for her handling of the coronavirus epidemic.

The parade, organized by John Morris of Morris Inc. construction company, featured “literally hundreds of cars,” fire trucks and other vehicles honking their horns and sirens while Noem watched, apparently surprised, from a local park.

[Morris said] “We just felt bad that the leadership of our state was kind of getting lambasted for her decision [not to close the state]. In South Dakota when somebody’s getting discouraged or down on their luck, that’s what we do: We step up for each other.”

Morris and his wife reportedly organized the parade by sending out “hundreds of text messages” to local friends and business owners. By one of his employee’s count, roughly 230 vehicles participated, driving a four-block route from a local high school, past the governor’s residence to the capitol building.

Gov. Noem posted a video of the parade, and her emotional reaction to it, in a tweet:

I am so blessed to serve the people of the great State of South Dakota. You folks made my day! pic.twitter.com/oy0e5KO9RZ

As of this writing, there are 859 active cases of the Wuhan Coronavirus in South Dakota. They’ve had 1,573 recoveries, and 17 people have died.

I love Gov. Kristi Noem. I would take her over Pence any day. One tough politician. I wish her the best. She seems so appreciative.

I think it is time to get the lawyers out of our elective offices. The Founders were business men, not lawyers.

The meat plant would have been hit regardless of any action or inaction. As the company said, it has more to do with the life style of the immigrants than State or company action. Further, this is a Chinese owned plant and received visitors from China.
She will be proven correct, the press will slink off to do another hit job.

She’s Niki Haley, without the feeling of haley about to stab us in the back once she’s in power.

Unlike Haley, Noem is a natural-born US citizen.

– Jane Fonda
– Hillary Clinton
– Nancy Pelosi
– Maxine Waters
– Adam Schiff
– James Comey
– Joe Biden
I can make a really long list. All of them “natural-born” citizens. All of them combined not worth the stink of my poop. And I was not born here.

South Carolina isn’t in the US?