U. Delaware says the archives won’t be fully curated until spring 2021, just a few months after the 2020 election. Speed up the process, release now what is ready, then follow the Palin process where numerous media entities had readers crowdsource the contents. 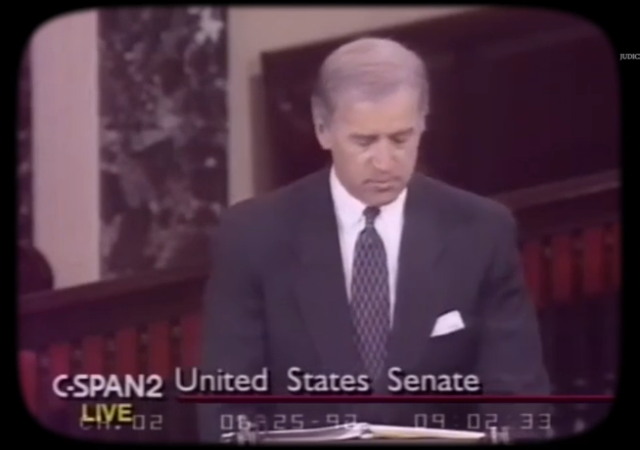 Joe Biden doesn’t want people going through his Senate archives housed at the University of Delaware before the 2020 general election.

Biden struck a deal that would keep the archives hidden from the public until two years after Biden leaves public life. But with the sexual assault allegation from Tara Reade, those archives have come into focus.

Vice President Biden donated his Senatorial papers to the University of Delaware pursuant to an agreement that prohibits the University from providing public access to those papers until they have been properly processed and archived. The University is bound by, and will comply with, the agreement. Until the archival process is complete and the collection is opened to the public, access is only available with Vice President Biden’s express consent.

The archives were donated in June 2012.

Remember these are files regarding Biden’s time in public office, unlike documents various people are seeking from Donald Trump which concern Trump’s personal life and business. The Biden archives could have been made public by now, 8 years after they were donated, except for the deal Biden struck to keep them out of the public eye.

The archives will eventually be made public, but only after it’s too late, and not just on the Tara Reade allegation.

Biden himself gave away the game when he stated during his interview with Mika Brzezinski that the U. Delaware archives should not be made public because some of the archived material may create political problems for him (emphasis added):

MB: Go ahead. The first is about your University of Delaware records. Do you agree with the reporting that those records were supposed to be revealed to the public, and then they were resealed for a longer period of time, until you leave, quote, public life? And if you agree with that, if that’s what happened, why did that happen?

JB: Because look, the fact is that there’s a lot of things, of speeches I’ve made, positions I’ve taken, interviews that I did overseas with people, all of those things relating to my job, and the idea that they would all be made public in the fact while I was running for public office, they could be really taken out of context. They’re papers or position papers, they are documents that existed and that — when I met, for example, when I met with Putin or when I met with whomever, and all of that could be fodder in a campaign at this time. I don’t know of anybody who’s done anything like that. And so the National Archives is the only place there would be anything having to do with personnel records. There are no personnel records in the Biden papers at the university.

MB: So, personnel records aside, are you certain there was nothing about Tara Reade in those records, and if so —

JB: I am absolutely certain.

MB: — why not approve a search of her name in those records?

JB: Approve a search of her name?

MB: Yes, and reveal anything that might be related to Tara Reade in the University of Delaware records.

JB: There is nothing. They’re not there. I don’t understand the point you’re trying to make.

JB: There are no personnel records by definition.

MB: The point I’m trying to make is you are approving, and actually calling for a search of the National Archives records of anything pertaining to Tara Reade. I’m asking, why not do the same in the University of Delaware records, which have raised questions because they were supposed to be revealed to the public and then they were sealed for a longer period of time. Why not do it for both sets of records?

JB: Because the material in the University of Delaware has no personnel files. It has — but it does have a lot of confidential conversations that I had with the president about a particular issue, that I had with the heads of state of other places, that — that would not be something that would be revealed while I was in public office or while I was seeking public office. It just stands to reason. To the best of my knowledge, no one else has done that either.

MB: I’m just talking about her name, not anybody else in those records — a search for that. Nothing classified with the president or anybody else. I’m just asking, why not do a search for Tara Reade’s name in the University of Delaware records?

JB: Look, I mean, who does that search?

MB: The University of Delaware. Perhaps you set up a commission that can do it. I don’t know, whatever is the fairest way to create the most transparency.

Wait, what? The archives may be relevant to the current polical campaign? That is precisely why the archives of Biden’s time in the Senate should be made public now.

The NY Times thinks the archives should be searched, so this is not just a Republican issue. Of course, the Times ludicrously suggested that the search for documents regarding Tara Reade be done by the Democratic National Committee (which has rejected the idea, anyway).

An NBC reporter suggests a team of reporters be assigned to the task:

“I think anything the Biden campaign can do, if they could agree on a certain number of reporters, a pool to go in & have access to the records & to write about it the way the other candidates have done with tax returns, that would be a step forward.”

But there is another way, a way Democrats embraced when the issue was former Alaskan Governor Sarah Palin’s state email archive from her time as Governor. When those tens of thousands of emails were released, they were put online by major media websites, which invited readers to crowdsource the review, with real-time updates.

Here’s what I wrote at the time, June 10, 2011 about that media crowdsourcing [links in original, have not been checked recently]:

This list is a work in progress, as new headlines will be added…:

The Biden Senate archives would be more complicated, for sure. The volume (1800 boxes and hundreds of gigabites of data) is far greater, and there might be national security or other information that needs to be redacted.

U. Delaware has had the archives since 2012, surely they must have done some work to get them ready. In fact, the archivists have said they have been “curating” the archives and expected them to be ready by Spring 2021, just a few months after the 2020 presidential election (but not released until 2 years after Biden leaves public life):

The University of Delaware said in a statement provided to CNN that the school is still “curating the collection” and the process is not expected to end until well into 2021. And even after the curation is finished, a spokeswoman for the school told CNN, the school would not release the papers until two years after Biden retires from public life.
“The University of Delaware received the Biden Senatorial Papers as a gift from Vice President Biden. We are currently curating the collection, a process that we estimate will carry at least into the spring of 2021,” spokeswoman Andrea Boyle said in the statement. “As the curating process is not complete, the papers are not yet available to the public, and we are not able to identify what documents or files can be found within the collection.”

U. Delaware should marshal resources to get that review done now, not a few months after the election, and if it won’t do it, surely there are other entities who could do it with Biden’s consent. Whatever has been reviewed already should be put online, and then more documents released online on a rolling basis.

General “Buck” Turgidson:
A-A-Am I to understand that the investigators are to be admitted entrance to my archives?

President Merkin Muffley:
That is correct, they’re here on my orders.

General “Buck” Turgidson:
I… I don’t know exactly how to put this, sir, but are you aware of what a serious breach of security that would be? I mean, they’ll see everything about my files, they’ll… they’ll see the Big Board!

Think there’s anything in there about extorting payola from Ukraine?

Not going to happen.
Biden is not THAT senile yet.

Those are standard records boxes. Typical box contains up to 2000 sheets of paper, not accounting for folders and odds and ends. There’s probably a couple million sheets of paper in there, and likely not getting scanned, so not much crowdsourcing to be done on the paper. Electronic records are hard to say. The alleged incident occurred just as electronic storage and email started to happen, but those early years saw a lot of things being printed out rather than saved electronically. Another factor in all of this is the retention period for allegations of this nature. If the various agencies and offices involved were following a retention schedule, it is possible that the relevant records were legally disposed of under the supervision of the National Archives.

As I’ve noted previously, the University Archives likely has a box level inventory, with parts of the collection described at the folder or document level. In theory, if there are personnel matters in those papers, they should be able to know the boxes to look in. If something like this accusation was handled at a staff level, they should be able to narrow it down to a number of boxes. But someone likely would need to go through a lot of documents.

The University has the further difficulty of the deed of gift. Biden controls that. It was clearly modified recently to account for Biden’s reentry into politics. The University is going to point to that document and indicate that it governs access.

Sauce for the goose.

And there is no bigger goose than Biden.

i don’t see ANY of the criminals being brought to justice.

Ummm, they are public records, already… you were not the president but merely one of 100 senators. Except for actual national secrets that are still relevant, you do not have the right to seal these documents.

We can safely assume that Biden does nothing on principle—or rather, the only principle is whatever benefits Biden.

Any consideration of upholding some conventional balance between Press, Public, and Government, or any such philosophical abstraction, is simply not a factor.

Therefore, from all the hemming and hawing, we can be reasonably certain that there is indeed damning evidence, and that evidence is in whatever pile of documents Biden is trying hardest to bury.

“Biden: Approve a search of her name?”

Anyone else hear echoes of “You mean like, with a cloth?”