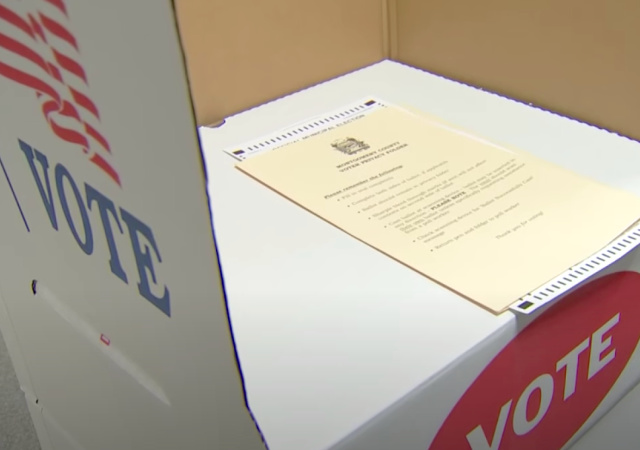 Former Judge of Elections in Philadelphia and Democratic Party official Domenick Demuro pleaded guilty for stuffing ballot boxes in favor of Democrats in return for money and other items.

He pleaded guilty in front of U.S. District Judge Paul Diamond in March, but the court unsealed the matter earlier this morning.

The Department of Justice explained what happened:

During his guilty plea hearing, Demuro admitted that while serving as an elected municipal Judge of Elections, he accepted bribes in the form of money and other things of value in exchange for adding ballots to increase the vote totals for certain candidates on the voting machines in his jurisdiction and for certifying tallies of all the ballots, including the fraudulent ballots. Demuro further admitted that a local political consultant gave him directions and paid him money to add votes for candidates supported by the consultant, including candidates for judicial office whose campaigns actually hired the consultant, and other candidates for various federal, state and local elective offices preferred by that consultant for a variety of reasons. Demuro also admitted that the votes he added in exchange for payments by the political consultant increased the number of votes fraudulently recorded and tallied for the consultant’s clients and preferred candidates, thereby diluting the ballots cast by actual voters.

In May 2014, the document states Demuro “27 fraudulent ballots during the primary election in the 39th Ward, 36th Division on behalf of” a client of the consultant mentioned above running for Judge of the Court of Common Please in the First Judicial District of Pennsylvania.

Demuro did the exact same thing in 2015.

Then in 2016 Demuro added “36 fraudulent ballots during the primary election” in the same location, but this time for the consultant’s “preferred candidates running for election to federal, state, and local offices.”

Voter fraud can be very difficult to catch. I imagine this person must have been especially brazen and stupid about it.

It’s all but impossible even to detect, let alone do anything about, in places where vote-by-mail or ballot harvesting are permitted.

It makes no sense to pay $5,000 for 36 votes, that number is too small to be meaningful….unless you are also bribing other officials around the state to do the same thing. So where is thorough investigation into every official this “consultant” has been in contact with?

How do we know that it was only 36 votes? By claiming that it was such a small number he is protecting the politicians who benefited from his crimes.

I can tell you how we did it when I was an election official.

We have the voter checklist, and those who voted are “checked.” The count of those voters needs to match the total count of ballots cast.

If one of the numbers is off by 10 or less, we would do the counts again, but eventually attribute the error to humans inability to count thousands of pages reliably.

It is very possible to stuff the ballot box, but in our state it requires two separate people to be involved – someone on the moderator staff to cast the ballots, and someone on the Checklist Supervisors staff to check off voters who did not vote. It would be very very difficult (but not impossible) for one person to do both.

If I were going to try to tip a close election in this manner, I would only want to vary a small number of ballots in each precinct to not raise suspicions, and then, I would do it across several precincts. So my bet is the consultant bribed, or tried to bribe, several people in several areas.

In NH it’s much simpler to tip a close election – just get out of state people to swear they live here, and. they can vote. In and out in 15 minutes. It’s voter fraud paradise.

Or, you knew how many votes you needed to pitch it to a runoff or to win.

This is why Sarah Hoyt always advises to vote ON election day. Never let them know in advance how many votes they have to fabricate!

And, as ConradCA mentions – that’s only what he plead to. Those were the only ones they found with his fingerprints on them, perhaps.

Yes, I never vote early or absentee, always on Election Day. I live in an ultra liberal town in MA, and when I go to vote, and the ladies at the polls see an R next to my name in their books, they give me a sour look. But at least I know I put my own paper ballot into the machine to read and count it, so there’s nothing they can do to change it, although my vote is pretty much irrelevant around here. I wouldn’t be at all surprised if the people in the office of the town clerk conveniently “lost” or changed some of the early or mail in votes. And what about all the votes that are still left to count after Election Day? I don’t want my vote to be one of those. In places where races are tight, tampering is just too easy.

There are no “close” races in the Commonwealth. It’s a one party state. The only reason we have a Republican governor is that the Democratic Party candidate was so poor.

Voting for a Republican in Massachusetts is much like how the poet Horace described second marriages. It is “the triumph of hope over experience.”

Maybe we can get some use out of the new bureaucracy of contact tracing stalkers after the COVID-19 scare has died down. I am sure the new division of culturally sensitive investigators will never disappear and this new governmental agency can be loosed on any inquiry.

democrats also want to hire 300,000 contact tracers. If a contact tracer shows up at my front door can I tell them they’re racist to ask for and assume I have a government issued ID? Can I tell them I’m too poor to have a government issued ID? Will there be a penalty for failing to “properly” identify myself? Can they force me to remove my mask, bandana, burka etc. for a positive ID?

I have a lot of questions for democrats, I would like some honest answers.

I wonder why the court unsealed the file? Has everyone involved in the conspiracy already had their homes and computers searched and/or been indicted? If not, then unsealing the file will do nothing but alert the co-conspirators to start shredding.

I guess those in Philly moved from the New Black Panther voter intimidation to this.

It’s more efficient. The New Black Panthers could only intimidate one voter at a time. Ballot box stuffing can add hundreds of your votes in one fell swoop.

Did Katha Pollitt help him stuff it?

That’s a lie. They can still vote if they go home. They just can’t vote here.

And how many hundreds/thousands more like him didn’t get caught?

Assuming he will actually face consequences, his greasy fingers should be surgically removed in addition to his prison sentence.

? Sounds cool, but is this really a thing?

Tom,
Yes it’s a thing; every mother who instills courtesy in her child is the judge.

This Democrat is rather dictatorial.

If he admitted to a couple of dozen votes, it was most likely a few hundred.

Are you advocating for the use of an electronic fingerprint system to prevent fraud with mail in ballots?

If voting is as important to minorities and marginalized people as the Dems claim (and I believe it is as important to everyone), then its importance should motivate them to get off their asses on election day and to go to the polls. It worked well enough for many generations of Americans even when America was more rural. There’s no reason why it can’t remain as viable today, with our high-density cities and mass transportation.

I live in Washington state where all voting is by mail. I despise it.

Eugene Volokh maintains a pretty nice webpage of cited quotes from various influential people admitting outright that they are out to ban some or all guns, which is very useful to shove in the faces of feckwits who parrot the standard leftist lie of, “Nobody wants to take your guns.” (Not as useful as it once was before Beto shot his mouth off, and made it common knowledge.)

The website fakehatecrimes dot org contains a documented list of “hate crimes” that turned out to be hoaxes, which is likewise useful for shutting own intersectionalists.

Does anybody maintain a web page with documented cases of election tampering? I could use one for all the NPCs who challenge me that “voting fraud doesn’t exist.”

A while back at a dinner party, the move “Spotlight” (uncovering the Catholic church sex scandal in Boston) came up. One of the guests described “everyone was denying it, but every where they looked they kept finding more.”

The dinner did not go well for a while there.

One for you and two for me. How behavior of a 3 year-old can grow to mean $$$ as an adult.

This is s imply the tip of. the iceberg about what the Demo-scum have been doing for years in its urban centers. What we need to return to is in-person except for those with a doctor certified physical condition. Let me ask someone who is more expert on the legal issue than I–does Congres have regulatory authority over federal elections. Of course that’ll make no difference difference with the wicked witch from west in control in the House. But the way may be open in the future to correct the current open door to fraud in federal elections whatever the states allow in state and local election.

“The congress may at any time by law make or alter such regulations”. So yes, Congress can and does tell the states how to hold congressional elections. It cannot do so for presidential elections, but it gets around that by making “suggestions” and guaranteeing that if the states comply with them then it will count their electors’ votes on Jan 3, whereas if they don’t there’s no guarantee.