Remember, Pelosi wants a federal standard to reopen because I guess the states and American people are too stupid to do it on their own. 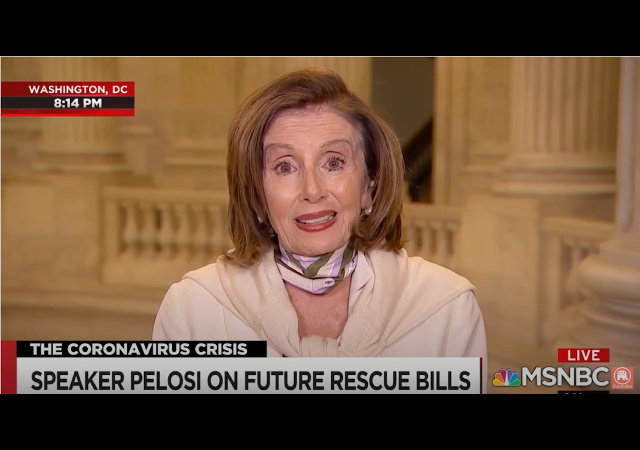 Speaker of the House Nancy Pelosi never lets a crisis go to waste to grab more power even as people suffer from the lockdown due to the Wuhan coronavirus outbreak.

On MSNBC, Pelosi made it known that she views “everything as an opportunity.” She also made it known she doesn’t care about working with Republicans because it’s important for the Democrats to present their relief bill “without too much conversation.”

I had no idea that the Founding Fathers said that the Constitution and Congressional rules go out the window in the case of a virus pandemic.

While Pelosi tried to make it seem like the American people are her focus she let it slip that it’s all about crushing the Republicans.

After all, if you keep Americans on the government payroll they’ll remain reliant on you.

She first said: “I think when they see what we are doing and it will be big because the problem is big and the needs of the American people are big. That it will be more attention paid to what the Republicans are saying or doing and then a judgment can be made. But I’m optimistic, always. I see everything as an opportunity. The bigger the challenge, the bigger the opportunity.”

Then she followed up: “It’s important for us to put forth our bill now without too much conversation.”

We all know Pelosi is hungry for more power. Just last week she said she wanted a federal standard to reopen the country because God forbid you trust the states. You know, the American people and those in charge of said states who actually understand what the people of those states need and want:

“I do think there should be federal standards, and I think that they should set an example,” Pelosi told a small group of masked reporters in the Capitol.

A number of states around the country have begun to scale back the social distancing requirements they’d adopted in response to the pandemic, allowing certain businesses — places like restaurants and beauty salons — to reopen on a limited-capacity basis.

But Pelosi cautioned against that state-by-state patchwork, noting that lines on a map are no barrier to the highly contagious virus.

“Everything should be based on science, and not the state or local — whatever it is,” she said. “And if you’re going to have a standard, you really have to have a federal standard. Because as we know, viruses know no borders, nationally, but they certainly don’t know any state borders.”

So I guess the states are reopening just to reopen? None of them have taken science into consideration. This woman touts science yet has no problem approving of butchering a live unborn human being. But I digress.

There won’t be any meaningful conversation because, as Andrew McCarthy reported in his letter to Queen Pelosi, she sits on the proxy votes of enough Dem Congresscritters to pass any bill she wants without any committee involvement nor open discussion. She has reduced legislative process to a single vote: hers. That is how she produced her last minute House Wuhan Flu pork bill on a moment’s notice.

notamemberofanyorganizedpolicital in reply to Pasadena Phil. | May 12, 2020 at 1:32 pm

Someone please take this baby killing Grannie
and stick her in a NYC nursing home.

The Chinese have this contained. Don’t wear masks, give us all your masks, you must wear masks to stop the spread, all that in just weeks.
Where is that science she claims to have?

what a lying bytch she is

You are too kind.

I guess I wasn’t paying attention…

She has turned out to be an evil monstrosity…
With two scarfs, is she trying to our scarf the scarf Dr?

It’s not working, she just looks like she is covering up a breathing hole teach…

So…..decades of GOPe bowing and groveling before Democrats in the Holy Name of Bipartisanship, and Democrats respond by freezing Republicans out at every opportunity. Thanks for nothing, ex-Speakers Paul Ryan and John Boehner!

Perhaps Ryan and Boehner were part of the larger plan. Perhaps their token “resistance” was to cover the “progress.” Compromise never made sense because we had an agenda different than theirs where it did make sense. We were the marks in that con game until we weren’t.

I have come to believe that Boehner, Ryan, and the rest of the GOPe had much more in common (politically speaking) with Obama and Pelosi than the vast majority of Republican voters. Their record of “failure theater” is certainly a strong indicator.

I’ve been swamped with fundraising e-mails from not only McConnell but BOEHNER for weeks now. Automatic spam flag. I’m wondering when I’ll start seeing e-mails from Ryan too. Why aren’t they leading the fundraising efforts with people like Andrew McCarthy, Devon Nunes, or Tom Cotton? Why are the RINOs still the leading faces of the party?!?!?

The Dems have one objective – vote by mail. If the opening up is centrally controlled, it is easier to keep people locked down. That lockdown will then be used as cover for a massive fraud labeled vote by mail or something similar. Any economic damage to these local Dem empires will be covered by the Federal taxpayers — right?

1) Let the states control. Let the Dem states suffer as they elected the Democrats.
2) Block ALL efforts at vote by mail (or similar) as they have plans for total fraud.

“By any means necessary” and they mean it.

I’m sure President Trump has known this was the Democrat party’s goal right from the start of this FAKE dim-panic!

You have to ask yourself who hates transparency more the left or the Chicoms?

And the difference is…?

If it wasn’t for stupid people, Democrats could never get elected.

Reminds me of the infamous “You have to pass the bill so that you can find out what is in it.”

“Federal standards”? Oh, like maybe one set of rules for environmental standards? Or adherence to immigration law? Because we certainly can’t allow states like California to have different standards than the rest of the country. This approach works both ways, Ms. Speaker.

Why do I get the feeling she has a puppy fur coat in her basement?

notamemberofanyorganizedpolicital in reply to ScottTheEngineer. | May 12, 2020 at 1:36 pm

A whole 16 foot long walk in closet full of them along with another four $30,000 frigs full of cavier, and gold flake ice creams…..

So Trump can’t make the governors do anything because of the 10th but Pelosi can?

At long last, somebody more senile than Babblin’ Joe.

Not one more federal penny for Wuhan coronavirus relief! At this point, the states are in charge of their own lockdowns. Governors are doing the damage to their people. It’s up to them to come up with unemployment funding and bailouts.

This witch needs to be pressed out of service.
Fast.

notamemberofanyorganizedpolicital in reply to TheFineReport.com. | May 12, 2020 at 1:37 pm

TheFineReport.com in reply to notamemberofanyorganizedpolicital. | May 12, 2020 at 2:40 pm

She’s got a very thin skin: repeated and relentless attacks against her – in person and everywhere else – must be pursued.

While I can hope the answer from r Senate and PDJT is Hell no, I don’t think they will be able to hold the line. The r are defending too many Senate seats in purple and blue states. As a practical matter we really shouldn’t expect a total rejection of spending more federal dollars.

What I could live with:

2. Payroll tax cut, both employees and employers for 18 months. That timeframe selected for budget cycle and immediately providing an incentive for rehiring. Obviously the goal would be to exclude all the government workers at every level since they haven’t been unemployed. Would take half a loaf in limiting government workers to only an employee payroll tax cut.

3. Some infrastructure projects that make sense. Maybe 5G and some road and bridge projects. Again that funding to bypass state governments and flow directly to municipal and county governments.

4. State government gets unrestricted funding based on number of congressional districts say $20 Million per. That puts the monkey on the state government to spend in partnership with locally led infrastructure or reimburse hospitals or piss it down the drain.

Previous funding from Covid spending released to states for unlimited purpose AFTER the state has developed and implemented some reasonable strategy for helping nursing homes, retirement homes etc with PPE, additional personnel, testing etc to ensure these vulnerable people are being taken care of.

If any funds are then unspent they can then:
A. Built a resupply of PPE
B. Developed and implemented testing regime
C. Paid out to hospitals
D. Funded overtime etc for hospital personnel and first responders

If they still have funds not obligated they can spend that on whatever lawful program they choose.

I get that not everyone wants more money spent. I don’t either. Using a framework such as I have described at least limits the mischief.

Who knows maybe the Speaker will reject a plan such as this and then the monkey is on her back from the big spenders.

If only she was senile and a fool.

She is a corrupt traitor.

If this country is stupid enough to elect Biden and empower the manifestly totalitarian Dhimmi-crat apparatchik-narcissists, then we fully deserve to suffer the consequences.

She should at least be wearing a mask when she sticks us up and demands all our money.

Isn’t she wearing a Botox mask?

Her plastic surgery was very good in the past, but it’s literally stretching thin.

You know, the American people and those in charge of said states who actually understand what the people of those states need and want

Obviously, you don’t mean people like Jay Inslee, the doofus governor in charge of my state of Washington.

Nancy’s concern, however, is that other states won’t follow the example set by Jay and his fellow Dem governors in NY and here on the Left Coast. Hence the need to exert federal authority.

Laura Ingraham
@IngrahamAngle
·
7h
2 months ago: “Can’t open until we flatten the curve to save our healthcare system.”

One month ago: “Can’t open until we have a vaccine.”

A few days ago: “Can’t open until we have multiple vaccines.”