“The 1,815-page piece of legislation is, once again, filled with ideological wishes that are unrelated to coronavirus relief” like amnesty, mandatory mail voting and banning voter i.d., stimulus payments to illegals, tax relief for wealthy blue-states, and more 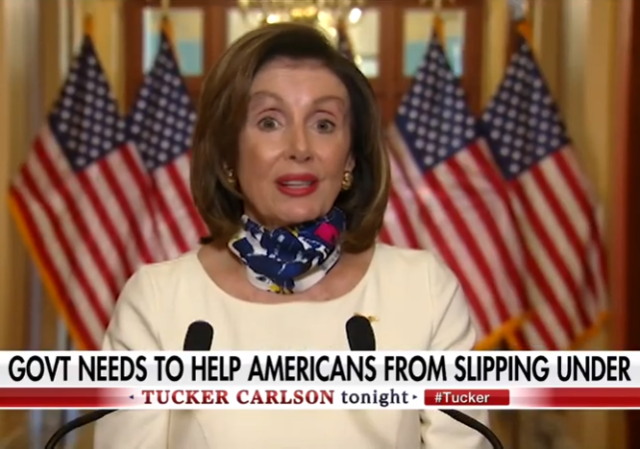 Nancy Pelosi and Democrats are once again exploiting the Coronavirus crisis in an attempt to ram through spending they would never get passed otherwise.

Pelosi has been absent in Washington for weeks, but she somehow produced an 1,800 page bill with a price tag of $3 trillion dollars that reads like a progressive wish list.

Speaker Pelosi unveiled Democrats’ proposed COVID-19 relief package on Tuesday, even as she refuses to allow the House to return to D.C. This version totals to an additional $3 trillion of relief.

The 1,815-page piece of legislation is, once again, filled with ideological wishes that are unrelated to coronavirus relief. Speaker Pelosi also allowed no GOP input in the crafting of this package that is virtually dead-on-arrival. Included in Speaker Pelosi’s bill are voting reforms, a repeal of the SALT cap, diversity incentives for marijuana businesses and other unrelated wish-list items.

You wouldn’t believe some of the items in this bill:

Sec. XX3. Temporary Protections for Essential Critical Infrastructure Workers. This section provides temporary protections to undocumented workers in the United States engaged in essential critical infrastructure work, as defined by DHS-issued guidance, during the COVID-19 emergency. Such workers are deemed to be in a period of deferred action and to be authorized for employment, and employers are shielded from certain immigration-related violations for employing such workers.

Section XX5. ICE Detention. This section requires DHS to review the immigration files of all individuals in the custody of Immigration and Customs Enforcement (ICE) to assess the need for continued detention. Individuals who are not subject to mandatory detention shall be prioritized for release, either on recognizance or into an alternative to detention program, unless the individual is a threat to public safety or national security.

Pelosi’s bill would give get-out-of-jail free cards to every federal prisoner with asthma or diabetes or who is over age 50.

The Democrats also want to force states to allow vote by mail—but would *prohibit* states from requiring photo ID, notarization, or witness signatures to send or receive mail-in ballots. This is the perfect storm for voter fraud.

And of course the Democrats snuck amnesty into the bill: Illegal immigrants in “essential services” would be authorized to work for the duration of the crisis. Meanwhile, 22 million Americans are unemployed. Don’t you think those Americans want a job?

How about money for the wealthy? Yup.

Henry Rodgers of the Daily Caller:

Speaker of the House Nancy Pelosi and House Democrats introduced Tuesday the text to their $3 trillion coronavirus relief package, which includes a massive tax break for the rich.

According to reports and the text, the “Heroes Act” gives $100,000 on average to people who make more than $1 million a year. The House Democrats 1,815-page package repeals the $10,000 state and local tax deduction cap (SALT), which allows taxpayers in high-tax states to deduct local tax payments on federal tax returns.

A full repeal fo SALT would give tax refunds to an estimated 13 million American households — most of which earn at least $100,000 a year, according to the New York Times. It is estimated that a repeal of SALT would reduce federal revenues by around $77 billion a year, with those making over $1 million a year receiving about $40 billion, the NEw York Times reported.

Each eligible person would receive $1,200 stimulus checks, up to $6,000 per household, according to the newly released legislation.

For example, a married couple filing taxes jointly would receive $2,400. They would get an additional $1,200 for each of their dependents, up to three, for a maximum benefit of $6,000.

Pelosi’s wish list bill is a nightmare scenario for voter fraud (and federalism).

Mandatory early voting for every state.

Mandatory mail-in ballots for everyone.

Seriously? This is NOT the time to play swamp politics!

Tucker Carlson made this the subject of his opening monologue last night. Watch the whole thing and share it with others. This is outrageous:

Drop a house on her head.

[email protected] in reply to notamemberofanyorganizedpolicital. | May 14, 2020 at 7:04 am

don’t you mean drop another house on her head?

Didn’t we drop one on her sister already?

Look, I’m just saying dropping houses on people’s heads is no basis for a system of government.

This is unsustainable. REOPEN

You can always count on lefties to left.

Most of that stuff was written already, sitting around waiting to be considered; they would have just needed to possibly tweak a few words or sentences in each one before dropping it into the behemoth.

Plus, is Congress going to be trying to pass multi-trillion dollar legislation every month now for the foreseeable future? That in itself is unsustainable.

Seems like it would be a political gold mine of issues for any swing house districts. Money for illegals? Amnesty? Voter ID? House vote will put pressure on swing district D’s.

And how long before Mitch says it’s “dead on arrival”?

Also, I think it was intentionally written so as to be DOA in the Senate, and Dems will go out to the world to complain about the terrible, horrible uncaring, and unfeeling Republicans.

Trump needs to get ahead on this; the House is expected to vote on it on Friday morning and he should make absolutely clear if it somehow, some way got 60 votes for cloture in the Senate and ended up making it to his desk it would be getting the veto pen(s).

Trump should take bill and urinate on it, then send it back to Pelosi. Send her a message.

I think you mean tear it in half.

It is the DEMS that have the Golden Shower Fetish.

As good an argument as any for a constitutional amendment allowing the line-item veto.

These multi-phonebook sized bills with 95% riders and 5% clauses actually relevant to the ostensible purpose of the bill are getting downright farcical.

I expect the democrats had very little to do with crafting this bill. This was crafted by Pelosi and her staff. She most likely had this stashed in her desk drawer. The doofus democrat that introduced and submitted the bill was probably picked from a had and told what to do.
There is, apparently, only a single House member now. Pelosi has taken everything away from everyone and holds all power to herself The other 434 House members are there in name only. The democrat members are all herded into a line and led to the sign-on table. The republican members have nothing to do but bluster and wave their hands.
There’s the President, the Senate with 100 members, and the House with only a single member, Pelosi.

Diversity requirements for marijuana dispensaries? Is that a fancy way of saying black people need funding to become better drug dealers? How the hell is that not offensive?

“Is this about the virus, or the election?!?”

Whatever you think of Q, he/they/it asks some insightful questions.

I don’t really understand her hatred toward America.
She was allowed to steal millions from the taxpayers while living lavishly on our dime during junkets around the world.
She’s worth well north of 100 million dollars, yet she’s 80 years ugly. What can she possibly get from destroying the country that allowed her to live like a queen?
Her continual assholedness makes absolutely no sense.

I think that for them the only better than gaining power is exercising it. Control freaks writ large.

I like it better when she wears the mask. It covers part of her mug and it covers the dewlap she’s cultivating. Maybe with the mask pulled up some near sighted well meaning constable would mistake her for an armed robber, maybe.

And this ladies and gentlemen, is what leftists live for. Because they are devoid of any real ideology, no new political ideas, and by all best accounts, without a political future, they must commit fraud and practically TREASON to say to their constituents, “There, we produced for you. Now you must relect us.”

How nice it must be to be a sociopath without conscience or guilt.