Over 3,000 Stand in Line for Food at NYC Church As Cuomo Extends Stay-at-Home Order

Over 3,000 Stand in Line for Food at NYC Church As Cuomo Extends Stay-at-Home Order

Catholic Charities has seen a 200% increase in food requests since late March. 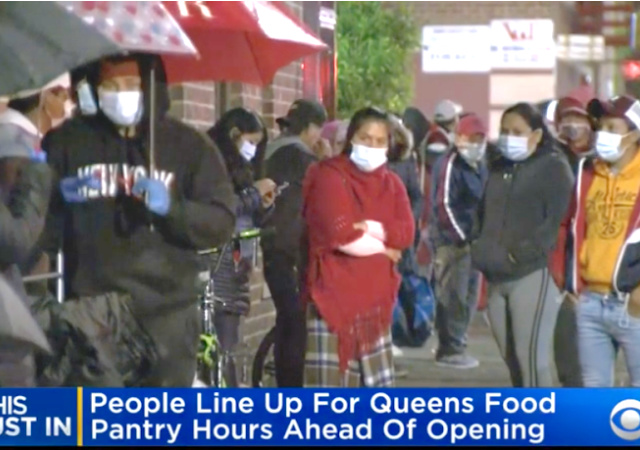 St. Bartholomew Catholic Church in Queens can only do so much for the community since the priests cannot have people in the church.

The priests feel frustrated and want to do more for the community. So they started a food pantry with the help of Catholic Charities. People began to line up at 5 a.m.:

“The last eight, 10 weeks has been a real tsunami, a disaster for us here, between sickness, death, unemployment and just lack of services for the undocumented,” Beuther said.

Beuther says even with empty pews, he can still help the neighborhood by feeding the families and answering the phone.

There has been a 200% increase in demand for food since the pandemic started.

UPDATE: Police estimate roughly 3,500 people are lined up outside a food pantry in Elmhurst, Queens hours before it opens. https://t.co/00smgB55UE

A week ago, WABC reported that another food pantry in Queens faced hardship. This one opens on Wednesdays at noon and closes at 4 p.m. or until they run out of food:

At one of the hardest-hit communities in Corona, a food pantry at Elmcor, located on Northern Boulevard, opens at noon on Wednesdays and goes until 4 p.m., or until they run out of food. Last week, they served at least 540 families.

A 9-year-old boy named Andrew was one of those in line who did not get food because the pantry ran out. He said his family is running out of food at home and he is not alone.

A report from the Brookings Institute said that since the pandemic started, 22.7% of families in the United States don’t have enough money for more food — that’s up from 11% in 2018.

And 17% of those asked said the children in their household are not eating enough because they couldn’t afford enough food.

Those people in the picture are not communist distancing.

SUCCESS!! crow the progressives. Bringing Marxism and it’s accompanying miseries to America as quickly as possible.

notamemberofanyorganizedpolicital in reply to puhiawa. | May 15, 2020 at 2:28 pm

It probably is another CBS created fake.

No judgement here but the photo doesn’t seem to reveal many folks named ‘Andrew’. How about ICE comes down to help shorten the line? Maybe I’m wrong, maybe I’m correct. How about we find out?

Especially in light of the recent SCOTUS decision regarding assistance in harboring non-lawful immigrants and the recent changes to the public charge rule. An argument could be made that since these charity organizations are tax exempt then if they provide in kind assistance, the funds used to do so are, arguably public funds in nature due to the tax exemption.

Non tax exempt funds/in kind contributions wouldn’t be affected by the public charge rule, but could still be subject to the harboring/providing assistance to a non-lawful immigrant statute.

Good thinking, Commo. I’m much less willing to give to charities the last few years, because I assume so much of it they give to illegal aliens, without so much as a question.

Just to be clear, if a traditional charitable organization desires to, potentially violate federal immigration law, that activity shouldn’t be subsidized with a federal tax exempt status. These organizations are free to set up non-tax exempt entities to do so.

If an individual chooses to flout federal law then by all means roll the dice but don’t rope other people into it.

I’ve seen in action that type of donation aggregation and distribution you mention. It makes me even more certain to know where my donations are ending up before I hand over money or goods.

As an aside, back in mid-to-late March I noticed that the usual was happening. Various entities, including TV stations, were encouraging people to help others in need by donating to the Red Cross. Those pleas ended pretty fast. I’m sure I wasn’t the only person whose first thought was, “And what is the Red Cross going to do with that money?” As far as I can tell, they’ve just been focused on blood donations. Franklin Graham put up a freakin’ medical tent in Central Park.

I quit giving to the Red Cross after 9-11 when the widows sued the RC and won. I decided that I don’t want my money going there ever again. Funny story, when Costco has their RC donation period, I was asked if I wanted to give, and I told the cashier in her 50s “No. I do not support the RC with money; blood yes, money no.” She looked at me and said quietly “I agree. I don’t give them money either.”

Sorry didn’t mean the downvote. Doggone button moved….or something. Meant to recount a incident involving a WW2 veteran on a island and the Red Cross. He and his mates were in heavy combat for a long time. They finally escaped with their lives and upon returning to base saw a nice clean table with coffee. When he and his fellow soldiers approached hoping to get a nice cup of coffee they were ushered away by Red Cross who told them “this is only for officers.” I couldn’t believe they would do such a thing but he reiterated that it was true and he was a honorable man.

Same hero got a personal letter of thanks from Harry S Truman for singlehandedly wiping out a Japanese ambush squad targeting his friends. He told me-showed me the letter too- in my youthful innocence I asked him if he felt any regrets about killing them. His reply 45 yrs ago changed forever my attitude. “Hell no! Those bastards were going to kill my friends,” was all he had to say.

Oddly enough, there is nothing on the governor’s website or NY Dept of Health website about the stay-at-home order being extended.

Cuomo is nothing but bad news for his constituents. Nothing but.

Absolutely true. And watch him get re-elected.

Let’s see . . . History repeats; so when have we seen this before? Hungry crowds milling about in urban streets . . . Oh yeah, that’s it—textbook Communist Revolution 101.

The trouble is, who is the desperate mob going to attack? The people holding them in thrall are Democrats. The other probem this time round is that unless they get a move on, the Linda Sarsour crowd will pop up and pretend to be the spokespersons for whatever-it-is. We’ve seen that before, too.

I don’t think the D’rats have thought this out very thoroughly.

I’m ok with an NYC lockdown for as long as it takes as long as the lockdown is also a lock-in.

I’m Catholic, and Catholic Charities supports Illegal Aliens. No $ for them

What’s the death toll from that level of imposed hunger? One wonders.

I would like to see one of those spiffy graphs over time of policy-driven, vs. Kung-Flu deaths. It’s a pretty simple calculation, that shouldn’t take 15,000 lines of bad code to implement.(*)

Where’s that model-wrangling prognosticator who gave us the Lockdown inspiring predictions. Oh, right. He resigned under a cloud. It seems his predictions missing by 10x, with prior epidemics wasn’t enough. But when people saw his code, it was too much.

Who says our culture doesn’t have an esthetic sense any more?